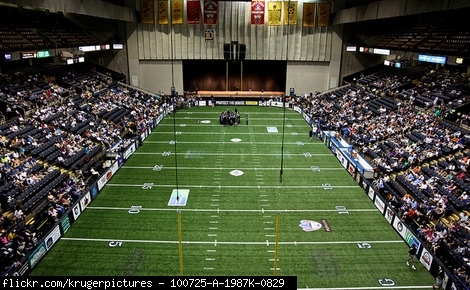 The 1st Mariner Arena in Baltimore, Maryland is owned by SMG Corporation. SMG began in 1977 with the Louisiana Superdome. The company has grown to managing 176 facilities. SMG is set up in two divisions. They have one division for the stadiums and a second for the arenas. Currently SMG is managing 74 arenas, 7 stadiums, 51 convention centers, 34 performing arts centers, and 10 other recreational facilities.

SMG's Baltimore Arena is considered the largest indoor sports and entertainment arena. It is an anchor for Baltimore as it has helped expand the city and prosperity. The facility was first opened in 1962. The idea was to redevelop the inner harbor area. 1st Mariner Arena is a small distance from the harbor, main city attractions, and hotels. Attached to the facility is an 850 car garage. There are also thousands of parking spaces nearby.

When the facility was first opened they called it a Civic Center. In 1986 the building was renamed the Baltimore Arena. It received the current name in 2003. At the official opening the arena hosted a game with the Baltimore Clippers and Paul Anka for entertainment. Since those first years entertainment names such as the Beatles, Elvis, Rolling Stones, Bob Dylan, Frank Sinatra, and the Supremes have played in the 1st Mariner Arena. The city does own the facility, with SMG managing the various entertainment events held there each year. Typically the arena sees 800,000 guests at the 120 events.

The Baltimore Blast MISL Soccer team calls the arena their home. Shows such as Sesame Street Live, Disney on Ice, Barnum and Bailey Circus, Stars on Ice, Motocross, Monster Jam, and the WWE have appeared at the facility. In recent years big entertainment names like Britney Spears, Toby Keith, Rascal Flatts, Janet Jackson, The Eagles, Kanye West, and U2 have been brought to the arena.

1st Mariner Arena has 11,000 permanent seats on three levels. Temporary seating can be set up on the floor for concert events. This gives the arena 13,500 capacity. The arena can be broken into segments if needed. The 1st Mariner is also an ice rink for hockey and other ice extravaganzas.

Visiting Baltimore and the arena may require a place to stay or eat. There are hotels close to the arena for visitors. These hotels are Days Inn, Marriott, Renaissance, and Sheraton. For eating close to the arena there is the Capital Grille. The hotels and restaurant named are not the only places available in the city of Baltimore, but they are the closest to the arena.

The 1st Mariner Arena has an insider's club. Members are able to join the club to get information about new events, special offers, promotions, and discounts available from the arena. These members are also able to pre-order tickets for certain events. Tickets for events can be purchased directly on their site, at their location, or through ticketmaster. Events coming up for the rest of 2009 include things like the American Idols Live Tour, Journey, Sesame Street Live, and Jeff Dunham.

Read about other Baltimore tourist attractions: