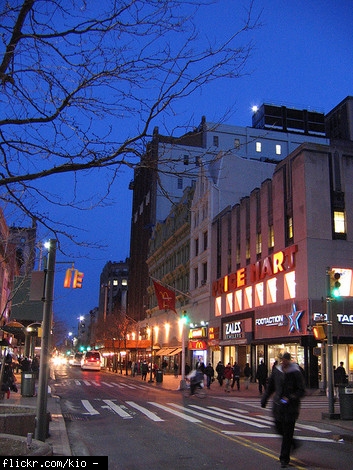 When you are in Brooklyn, NY, you will want to visit what is considered to be probably the hottest shopping center in the city. More than 100,000 visitors a day come from all over the city - and from out of it - to visit the Fulton Mall.

The Mall area, which is simply stores on the street, is an open mall that extends for several blocks. Altogether, there are more than 230 stores. Right now, the area is undergoing a $15 million renovation which will make it even better. The improvement project is expected to last through the early part of 2011.

The Mall is spread out over a 17 block area. As it gets renovated, the new plans call for a mix of commercial and retail spaces, along with hotels and even some residential areas. The main stores include a Macys', Modell's, Conway, and a Jimmy Jazz.

The Fulton Mall area has stores for just about anything you can think of - and a few more. In fact, you certainly would probably want to look over the list of stores before you buy because you may be able to find the same thing at a lower price just a few doors away.

Women can find the latest fashions in clothes, and in some fashion shows, at many different stores. While many of the stores would provide clothes for men and women, many of them are just for women, or girls. Among them, you could find stores like Ashley Stewart, Lane Bryant, Mirage Boutique, Pretty Girl, Stellar Ladies Fashion, and more. Children's clothes include Angels, Children's Place, and Cookie's.

There are many stores that sell shoes, so you have the chance to look around for the best deals. These stores range from low cost shoes up to the much higher priced fashion shoes. There is the $5 Shoe Warehouse, Foot Locker, Fino Menswear and Shoes, Fulton Fashion Footwear, Hot Spot Sneakers, Kids Foot Looker, KoKo Shoes, and a lot more stores, too.

You can also get some deals when you want to buy items for your home. There is a Bed, Bath & Linen, an Adora Home Fashion, Universal Credit Furniture & Appliance, and an ABC Discount.

Jewelry stores are in abundance in this open Mall. There are at least five perfume stores and at least 12 stores where you can find various types of jewelry and watches.

When you want electronics and cellphones, again, you will not have to look far. There are at least eight different cell phone shops, and just about as many other stores to get your electronics and music from. You can also get games, too.

Just like everything else, there are also plenty of choices for when you get hungry. Nearly all of the fast food establishments are here, and that includes, McDonald's, KFC, Arby's, two Burger King's, Wendy's, and Tim Horton's. Other restaurants offer Thai food, hot dogs, and pizza.

The Fulton Mall of Brooklyn, NY, is easily accessible by train. In fact, it is close to one of the largest hubs in the city, which means you can leave your car elsewhere if you prefer.

City-data.com does not guarantee the accuracy or timeliness of any information on this site.  Use at your own risk.
Some parts © 2022 Advameg, Inc.