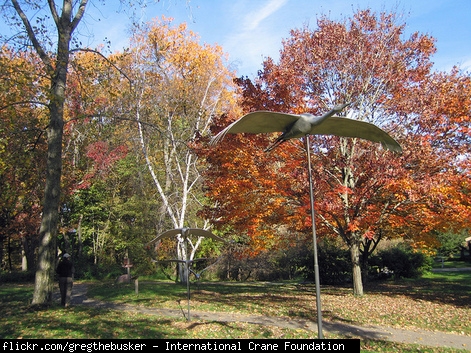 The International Crane Foundation (ICF,) located at E-11376 Shady Lane Road in Baraboo, Wisconsin, was established in 1973 on a horse farm by Ron Sauey and George Archibald. The two men met as graduate students at Cornell University two years earlier and were studying the behaviors and ecology of cranes. Upon studying the graceful birds, the men decided to found an organization committed to conservation and research.

Today the foundation takes part in worldwide conservation efforts to preserve cranes and the wetland and grassland ecosystems they rely upon for survival. Committed to inspiring and providing knowledge, ICF helps educate people about reducing and eliminating threats to critical ecosystems. Black, grey and red-crowned, white-napped and black-necked cranes, as well as blue, hooded, sandhill, Sarus, Siberian, wattled, whooping, Brolga, Demoiselle and Eurasian cranes are among the birds featured at the park.

While most nature and conservation organizations study and house a wide variety of species, ICF focuses its attention on cranes. Endangered species management, wetland ecology, habitat restoration and the importance of international cooperation, as these issues relate to the preservation of cranes at a global level is ICF's primary area of examination. The foundation's central objective is providing interactive education and conservation programs, aimed at fostering an understanding of cranes, as well as highlighting ways to preserve crane populations in numerous countries.

Ecosystem protection and restoration initiatives are ways the organization works to generate awareness among scientists, government officials and the public about how critical wetlands and grasslands are to wildlife, as well as to people. Striving to further research efforts, ICF offers scientists, including conservationists and biologists, access to its grounds and bird collection. The organization also sponsors workshops and publications as a way to support social networking and preservation efforts.

Education is the key to the survival of the crane. That is why the foundation opens its doors to visitors and provides outreach initiatives, such as the Annual Midwest Sandhill Crane Count program. ICF spreads the word about its site throughout the United States through films, representation in the national media and educational program offerings. An international component to ICF is its training in habitat management, restoration, ecology, captive management and propagation to colleagues in other countries. The center also sponsors international visits from foreign scientists, governments and leaders, as well as conservation centers in the U.S. and other countries.

The relationship between wildlife, habitat and people is closely examined through ICF. Through its captive crane collection, the foundation can facilitate captive breeding and reintroduction of cranes into the wild. Endangered species management and education efforts also are made possible through keeping the captive population.

ICF is open daily from 9 a.m.-5 p.m. April 15-Oct. 31. Reservations are not required for individuals or family groups. Tours are conducted each day at 10 a.m. and 1 and 3 p.m. Memorial Day through Labor Day, and on weekends in April, May, September and October. Recorded materials for self-guided tours also are available at the Visitor Center. Visitors are asked not to touch or pet the birds. Capturing the visit via personal video cameras is encouraged.

Read about other Baraboo tourist attractions:

City-data.com does not guarantee the accuracy or timeliness of any information on this site.  Use at your own risk.
Some parts © 2021 Advameg, Inc.