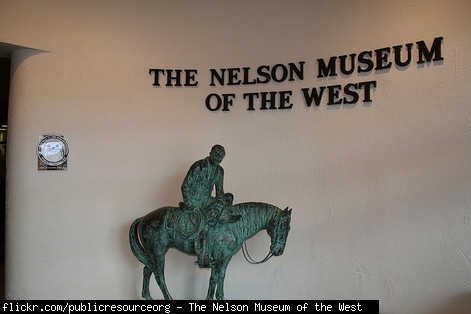 Visitors to Cheyenne, Wyoming have a western attraction that is dedicated to the preservation of the past. The Nelson Museum of the West is located at 1714 Carey Street, Cheyenne, WY 82001. There is 18,000 square feet of space in the museum which was a building that was constructed as a women's fine clothier and fur store. When it became a museum the building was renovated and is fully accessible to the handicapped. The collection in the museum is climate controlled to preserve it.

When guests tour the museum they will find more than twenty exhibits that are both temporary and permanent. There is approximately 11,000 square feet of gallery space in the Nelson Museum of the West. Exhibits that visitors may see include the Art of the First Americans, Kid's Stuff, "and I don't wear bloomers!'', They Saddled the West, Artistry in Silver and Steel, Trail Dust, The Ute Chieftain, and The Army in the West.

The Military of the West exhibit features uniforms from the Officers and Enlisted Cavalrymen from the Indian Wars, Spanish War, American War, World War I and World War II. Visitors will be treated to Cowboy and Native American objects. This encompasses the largest part of the collection, with over 6,000 artifacts.

There are tapestries depicting Plains Indian Art and Indian weaponry. Stuffed bears interact with the guests as they peruse the exhibits. A Doctor's Buggy is hitched and ready to assist townsfolk. A room furnished in the Cattle Baron period of Wyoming greets visitors and there is also a collection of fine firearms made by the best gun makers of the time.

After visitors have toured the Nelson Museum of the West they can see some of the other attractions that Cheyenne has to offer. If they are visiting in the summer at the end of July and first of August they can take in the biggest rodeo of all at Cheyenne Frontier Days. This pro rodeo features all of the exciting events that make a rodeo great. Bull riding, calf roping, barrel racing, team roping, bronco riding and many other exciting events present cowboys and cowgirls trying to best each other for a large purse. There is also a midway with rides and star studded entertainment.

The Cheyenne Depot Museum honors the roots of the town of Cheyenne. The Union Pacific Railroad came to town in the 1860's as part of the Transcontinental Railroad. Today visitors to Cheyenne can see the trains as they pass through this frontier town. Although no passenger trains stop there anymore it is still a glimpse into the past. Guests of the museum can dine at Shadow's Pub & Grill and see the trains add a car or change crews. There are many hotels in the Cheyenne area for guests to spend a couple of days exploring the sights.

Read about other Cheyenne tourist attractions: