According to the data provided by Prosper (https://www.prosper.com/tools/DataExport.aspx), the average loan amount increased in past years for almost all borrower income ranges. 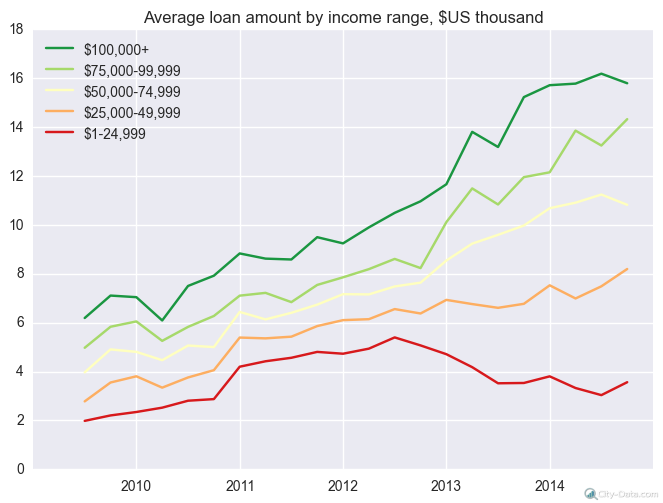 The number of loans issued to people with a yearly income of less than $25,000 has decreased since 2011, but for all other income ranges, there has been a significant increase. The most impressive increase was seen in the second-highest range; the average loan amount to people earning more than $75,000-$99,999 has increased by 140 percent.

The change is especially astounding once we look at the percentage of loans of a specific size. Since the smallest loan size currently available on Prosper is $2,500, we first consider all loans smaller than $3,000. If we examine the entire five-year period, we see that one in every five loans falls into this category. But this percentage has not been constant — in the second half of 2009, these small loans constituted 44 percent of the entire pool. The number has dropped as low as 3 percent among loans originating in the second half of 2014. Below you can see the chart that shows this in detail (note that we have removed the seasonal fluctuations): 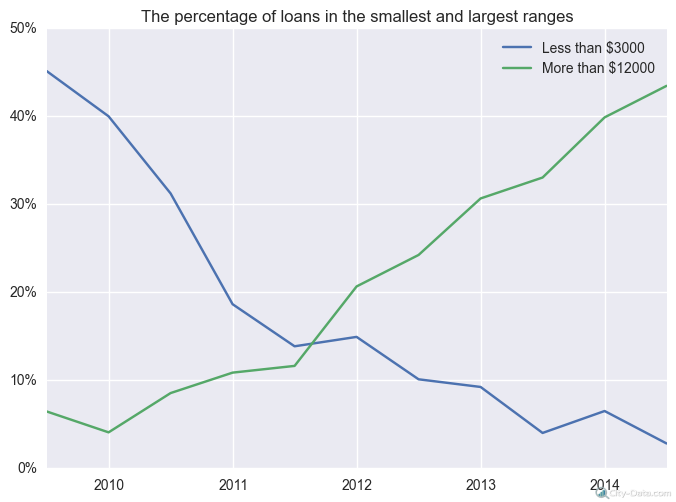 Conversely, large loans (defined as those with an amount in excess of $12,000) have skyrocketed from only 4 percent in H1 2010 to over 40 percent in recent months.

As you can see on the map below, in many states (such as California, Texas and New Jersey) around half of all loans fell into the “large” category in 2014. The largest number, 65 percent, was registered in Washington, D.C.

So, besides the evident growth in average loan sizes, it seems that more people are now comfortable with using peer-to-peer lending for large loans. One of the reasons may be the increasing availability of loans of up to $25,000. Such large loans are available to all Prosper borrowers with at least a “D” rating. This is only the fifth rating out of seven.