Since the 1950s – the decade of all-time highest marriage rates, youngest families and “Mrs.” degrees – the social institutions of marriage and family in the United States have changed dramatically. The marriage rate dropped from 143 to 31 in 2012, and today less than half of women (47.1 percent) are married. In contrast, the proportion of divorced or separated women has significantly increased (14 percent). The share of married men is slightly higher (50.6 percent), and the share of divorced or separated men is lower (11 percent).

Several studies argue that it is too early to proclaim the death of American family. Firstly, people are not giving up on marriage, they are simply waiting longer to tie the knot. Today, the average age of getting married is historically high for men and women: 28.9 and 27 years of age respectively. Therefore, since the rate of marriage is calculated by the percentage of women over 15 getting married each year, the marriage rate automatically falls as the average age of marriage goes up.[i]

Secondly, cohabitation has become a new form of living arrangement for those who do not want to marry formally but still want to live as a family couple. Simultaneously with marriage decrease, the cohabitation rate has increased significantly from less than half a million couples in 1960 to 7.5 million couples in 2010.[ii] Studies show that marriages and cohabiting relationships show similar results over time in terms of well-being, health and social ties.[iii] 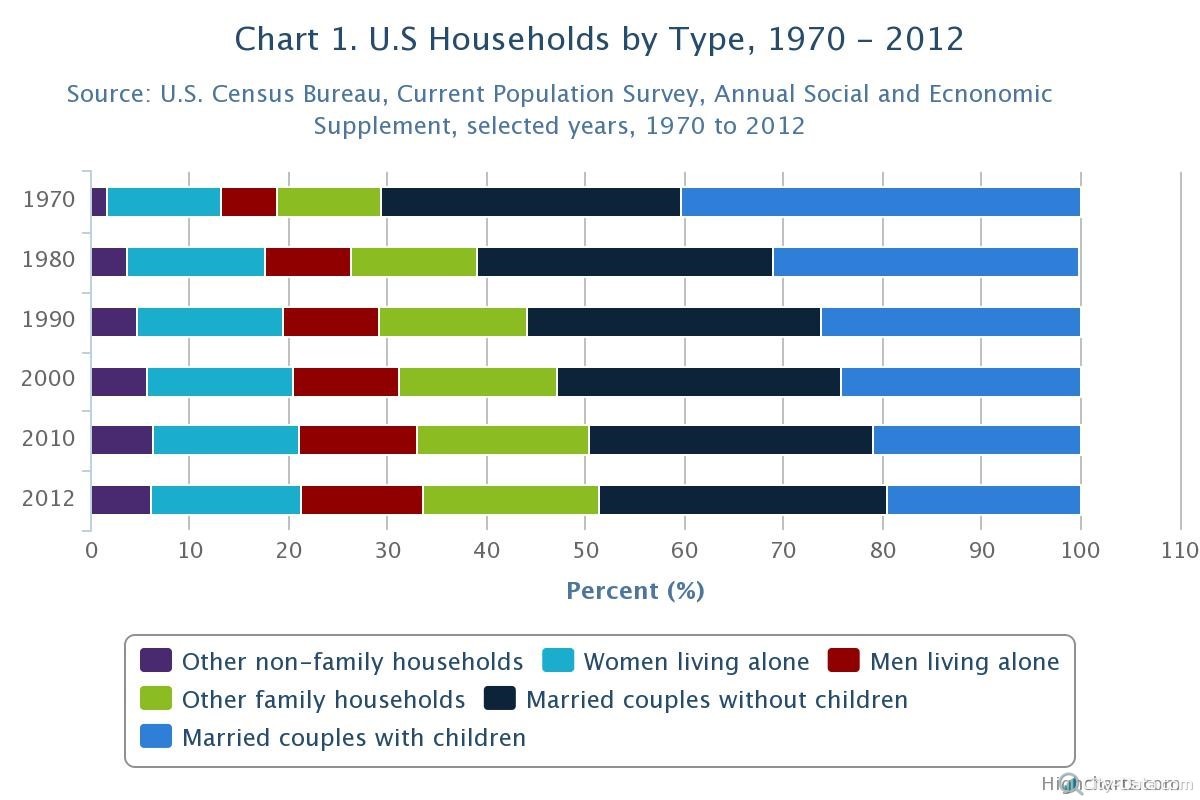 Marriage and divorce rates as well as family type vary significantly across race and ethnic groups. Eighty percent of Asian and non-Hispanic White family households are married couple households, while the corresponding proportion among Hispanic and Black householders is smaller: 62 percent and 44 percent, respectively. Black children (55 percent) and Hispanic children (31 percent) are more likely to live with one parent than non-Hispanic White children (21 percent) or Asian children (13 percent).[v]

Okay. Let us stop here with the household composition, and examine the change in gender roles: how has the family role distribution changed over time?

As in public life, the family roles of men and women are converging as well. Fathers are doing more housework and childcare, mothers more paid work outside the home and an equal share of both say they wish they could be at home raising their children rather than working. Chart 2 shows how closely men and women now see their roles in providing emotional support to children – a role traditionally ascribed to women. Likewise, they both carry a disciplinary role, which was traditionally the father’s job.

Though traditional family roles have gone through drastic changes, neither of them has overtaken the other in their “traditional”realms.[vii] Income providing or breadwinning is still father’s job. Fathers are more inclined to work full time than moms and prefer high-paying jobs over jobs with flexible schedule. While fathers spend, on average, 11 working hours weekly more than mothers, mothers spend 12 more hours than fathers on housework and childcare.[viii] 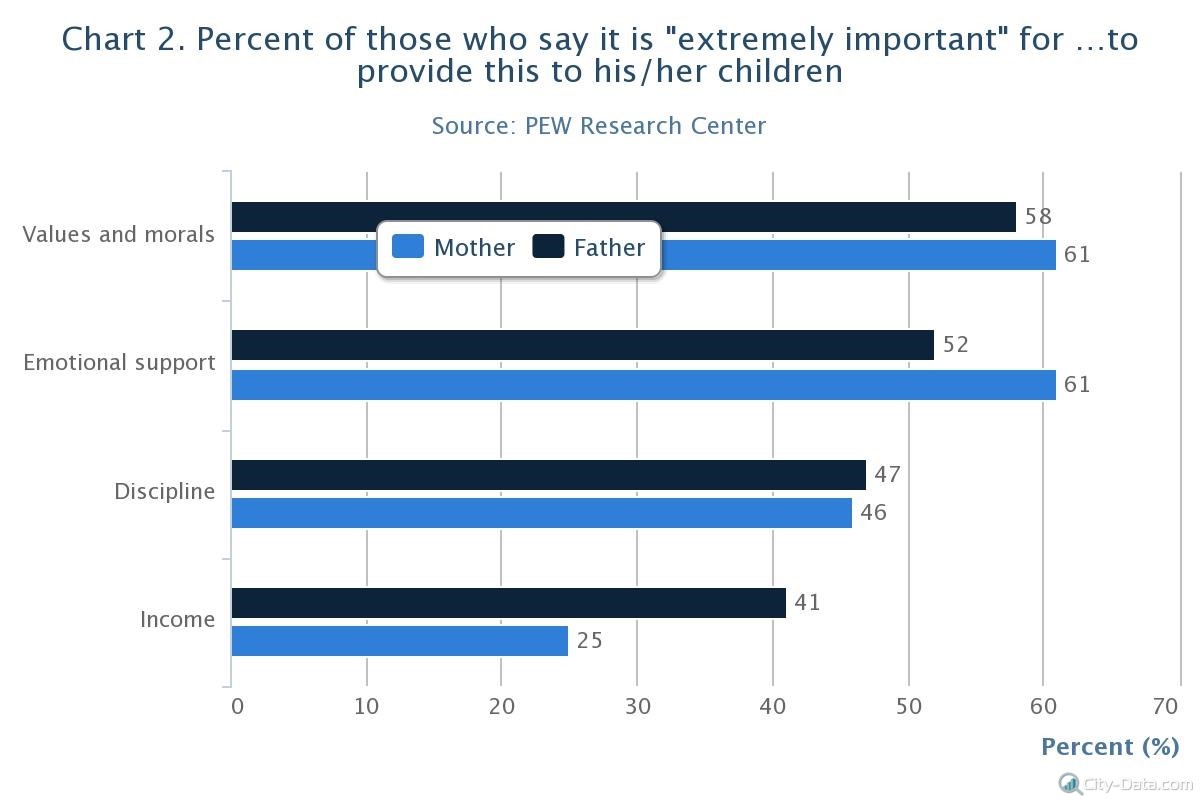 Chart 3 shows a cluster of people being rather conservative in their definition of family and marriage. While they are more comfortable with women with young children working or with marriage of people from different races, what is crucial for them is the formal status of being married and the traditional composition of a family: a father, a mother and a child. All other variations that would alter the traditional family structure such as single parenting or same-sex parenting are unacceptable. 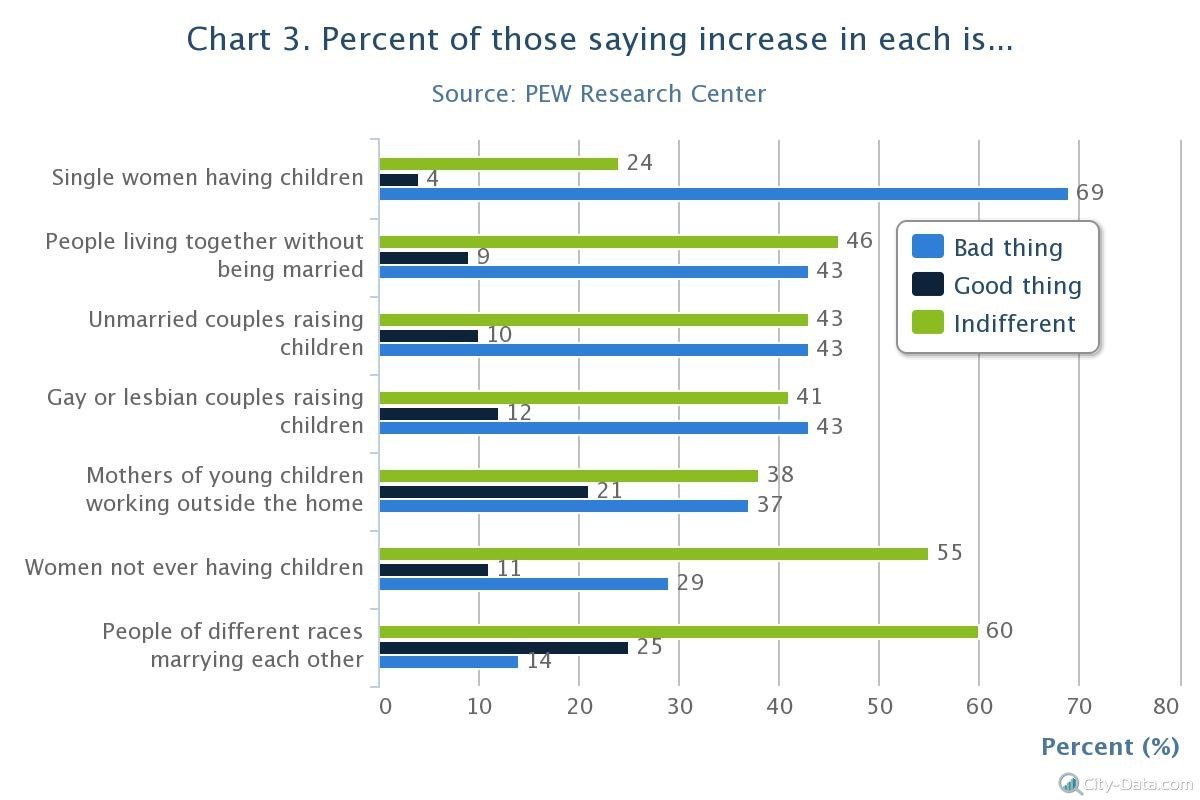 However, 43 percent make a minority. For most people, the definition of family is not that rigid. Before writing this article, I put a small poll in one of Facebook’s “mamas’” groups with more than 14,000 members. My question was how members would describe the American family today in one word, and was naïve enough to offer some options like “marriage,” “children,” “support” and “security.” The most popular answer was “diverse”. The question is, however, to what extent we can stretch the definition of what we call a family to incorporate all possible diversities and still keep the meaning?

[ii] Rose Kreider, “Increase in Opposite-sex Cohabiting Couples from 2009 to 2010 in the Annual Social and Economic Supplement to the Current Population Survey”, The Census Bureau, 15 September, 2010; http://www.census.gov/population/www/socdemo/Inc-Opp-sex-2009-to-2010.pdf

One thought on “Picturing the American Family Today”