The Phillips curve is a mathematical study of the relationship between inflation and unemployment in an economy. We know that for any place or region — and consequently, for its government — some of the primary goals are:

However, achieving all of these goals at once is the economic equivalent of Utopia. It requires a veritable balancing act to manage these goals because they are conflicting in nature. Every year, administrators face a trade-off. One of these is between inflation and unemployment. Intuitively, we understand that to reduce unemployment, the government gives incentives and creates more jobs. While this increases the GDP output, it also reduces the supply of labor in the market. Ironically, the reduction in the available workforce makes labor costly and wages increase. This causes inflation.

Simultaneously, when more people become employed, they are armed with wages and want to consume more goods. As a result, the demand for the available goods increases, which again causes inflation.

Through this simple explanation, we see how inflation (infla) and unemployment (unemplo) are linked intricately and inversely. Despite a government’s best efforts, these two important indicators cannot be lowered simultaneously. This means that each month, governments (through their armies of advisors and economists) must make decisions. In particular, they have to maintain the rates of inflation and unemployment at optimal levels.

Given the sensitive impact of these two indicators for the majority of people, we have to watch and control them regularly. In this article, we examine the modern-day relevance of the century-old theory of inflation and unemployment. We give our own critique and estimate their relationship, considering today’s context.

Naturally, we would like to analyze data pertaining to the whole country (U.S.) for at least 20 years before we come to any conclusion. However, we are limited by the availability of data and hence, we will confine ourselves to only one state (Indiana). From the official website of the Bureau of Labor Statistics, we have the monthly inflation and unemployment rates for 10 years (2003 through 2013). We assign sequential numbers to the individual months, beginning with 1 (Jan 2003) and ending with 132 (Dec 2013).

Inflation has a number of aspects. For the sake of this article, we look at only Consumer Price Index (CPI) inflation. Unemployment figures are in total for the whole state (public sector and private sector together). Since inflation refers to the price change in one month over the previous month, we must restore parity and adjust unemployment. So, we define a variable, chanunemp, which is the absolute change in unemployment in one month over the previous month. Now, it is appropriate to compare infla and chanunemp. 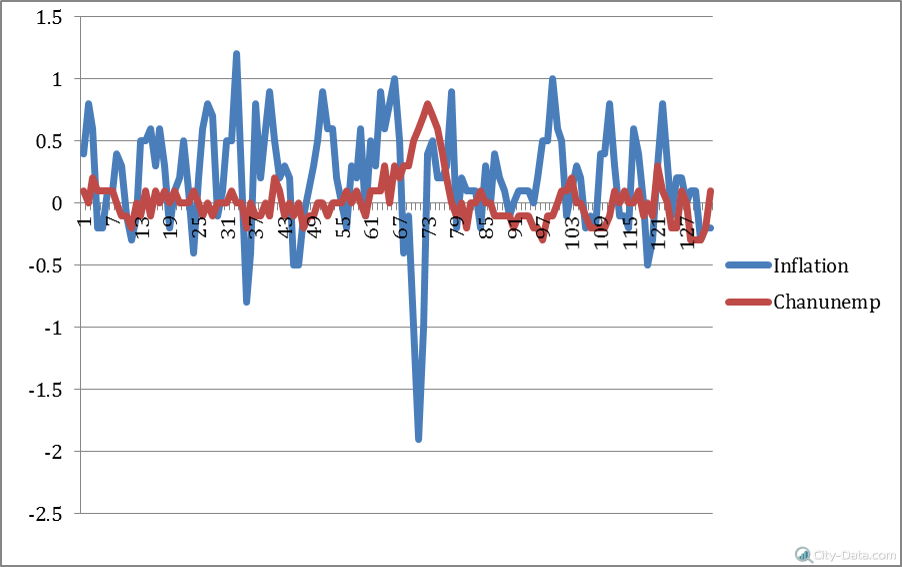 If we take the product of infla and chanunemp, we get a graph as below: 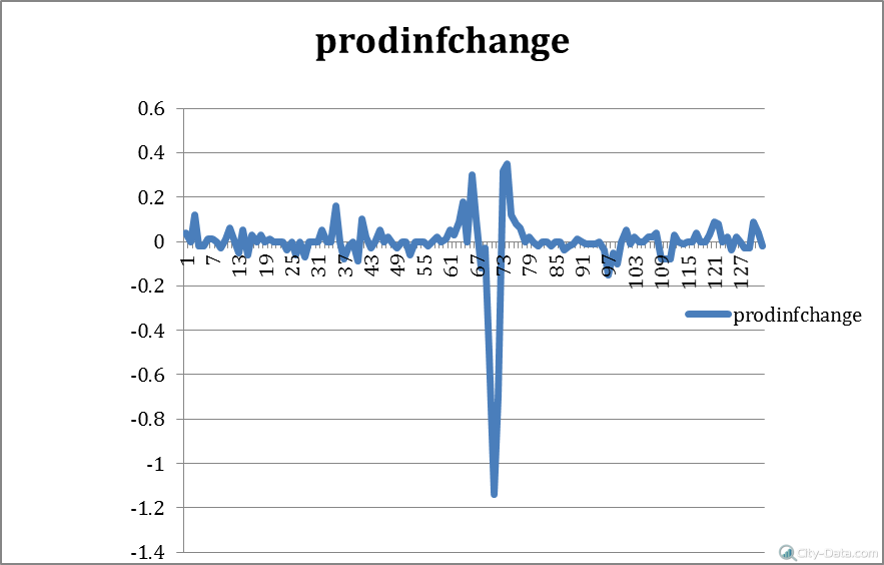 From both these figures, it is visibly clear that months 69 (Sep 2008) and 70 (Oct 2008) are outliers. All parameters show drastic deviation — understandably so because they represent the two worst months of the banking and financial crisis. Experts widely accept that the Lehman Brothers collapse on September 15th, 2008 precipitated the crisis into a full recession. It implies that we cannot aggregate such a volatile period into one study.

As a next step, we segregate the data into two phases:

With this, we find two relatively smooth and predictable patterns:

For Phase 2, we see the following two patterns: 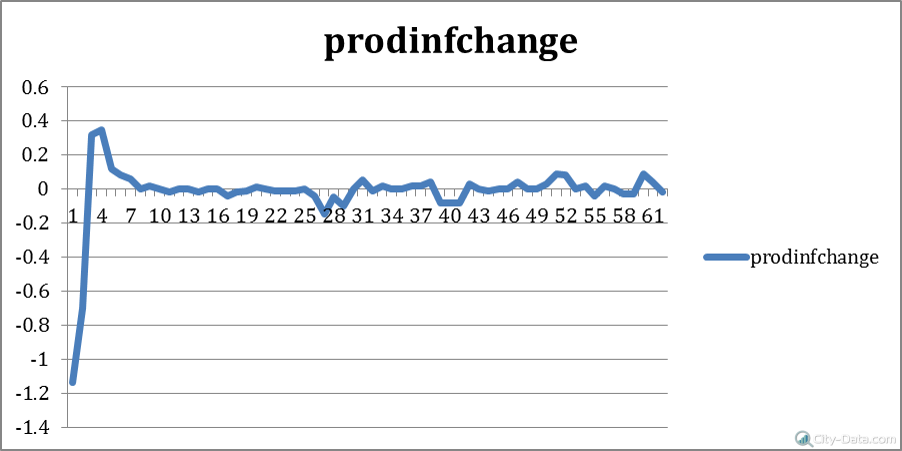 To begin, we run a simple linear regression with infla as the dependent variable and chanunemp as the independent variable. It gives a poor coefficient of determination (R-squared) of 0.036 and, worse, the probability of error (p) is as high as 0.139.

Having said this, due to the ongoing global aftershocks from 2008, it is not a stable model, a fact which is evident from the low R-squared.

From these observations, our conclusion is that the traditional Phillips curve (opposite directions of change in inflation and change in unemployment) is not applicable in the 21st century in Indiana.  Admittedly, in the last few years, the U.S. economy has been in upheaval, resulting in an undesirable situation where both inflation and unemployment have risen together. This has made the task of economists, statisticians and financial modelers extremely difficult.

Nirad is a Ph.D. research student in Economics and Business Environment at the Indian Institute of Management (IIM). Before this, he completed his MBA with specializations in Marketing and Economics at the prestigious IIM. To complement his degrees, he has over seven years of valuable hands-on experience in the corporate sector through diverse functions like marketing, IT services consulting, sales support and business analysis. He lives in Mumbai and Delhi in India, which allows him to pursue his passion for business writing along with his academic pursuits.