Since the beginning of the past century, geography has tried to expand its research areas to explore new fields where spatial analysis and data production could merge in new geographic correlations.

In the 1920s, Chicago schools tried to manage this correlation between crime and geography and start a new way to spatially analyze delinquency, principally in the urban areas. It was the beginning of the geography of crime.

Researchers including David Herbert, Keith Harries and Oscar Newman tried to investigate the distribution and evolution of the crime patterns from multiple fields, where official statistics (police data records) were used as the base of every analytical study (as the positivist school advocated).

Theoretical positivist arguments were not valid for the critical criminology. Statistics from official data could be corrupted by the judicial machinery of the State – Governments made laws where certain behaviors could be punished after a new law was passed.

Urbanism applied to crime prevention was another tool used to investigate the spatial spread of delinquency. Oscar Newman was its primary advocate, and wrote a guideline about these issues.

Each of these approaches demonstrates the multiple fields where geography tried to analyze crime and its implications in the territory. One of these areas has been the correlation between weather and high or low crime rates.

“The majority of the literature that has investigated the relationship between weather and crime support the theory that weather does affect criminal activity.” Some authors, such as Harries and Standler, “discuss both laboratory research and field setting research to link temperature to aggressive behavior” (Muyarama and Gutierrez; 2013).

The investigations into how weather influences the crime rate have used climate conditions including humidity, precipitation, wind and snow intensity.

For example, the study of the “Santa Ana” winds in Los Angeles by Miller (1968) and Cohn (1988) reveals that “there were significantly more homicides on ‘Santa Ana’ days than would be expected” (Cohn; 1990).

Using this approach, researchers tried to show how some weather activities could affect the crime rates in the area of Orlando, Florida. For this study, they utilized the two most significant climate conditions: rain and temperature.

Temperature is the most common climatic criteria used to analyze the correlation between weather and increase or decrease of the crime rate. Both high and low temperatures have noticeably impacted human behavior.

Boyanowsky references a study in 1981 where he analyzed the relations between extreme high and low temperature conditions and criminals’ reactions to these environmental conditions. “Under uncomfortably low temperatures (about 45°F), angered subjects showed significantly increased aggression.” (…) “When uncomfortably hot, subjects took longer to respond” (Cohn; 1990).

Non-aggression assaults and property crimes, such as theft or burglary, present a stronger correlation with hot temperatures than in winter. Murataya and Gutierrez theorized that with “”fine” weather “people are more likely to be absent from their home,” (Muyarama and Gutierrez; 2013) which causes an increase in theft and similar offenses. Some specific types of crime increase in good weather, such as riots, where the probability of a higher number of riots greatly rises at temperatures above 85 ºF.

Graph 1 (below) presents the variations in crime rates, precipitation and temperature. There is a continuous descent of the crime rate from 2000 to 2011 and an irregular precipitation ascension. These factors have an inverse trajectory, with an exception between 2002 and 2004, when the two rates showed a parallel decrease.

The correlation between temperatures and crime rate does not exhibit any deep result, but it has to be mentioned that when temperature decreases (2000-2003 and 2007-2010) the crime rate is reduced. 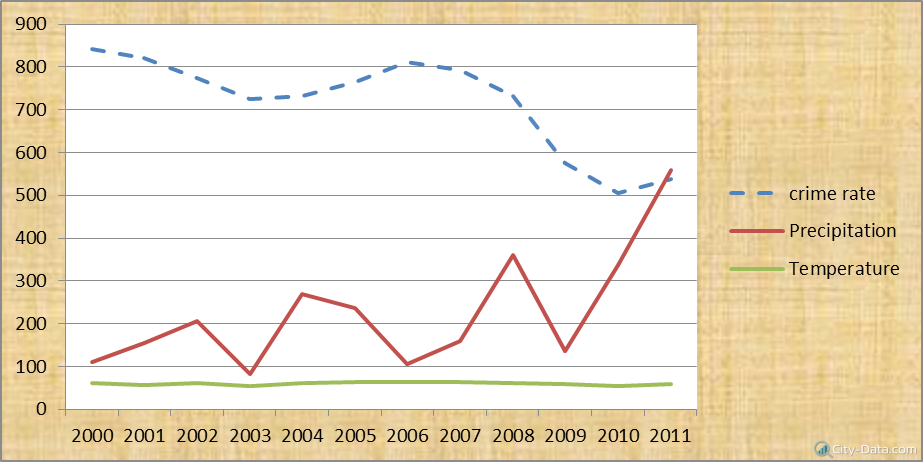 Studying each weather variable separately and correlating it with property and violent crimes shows the follow conclusions: 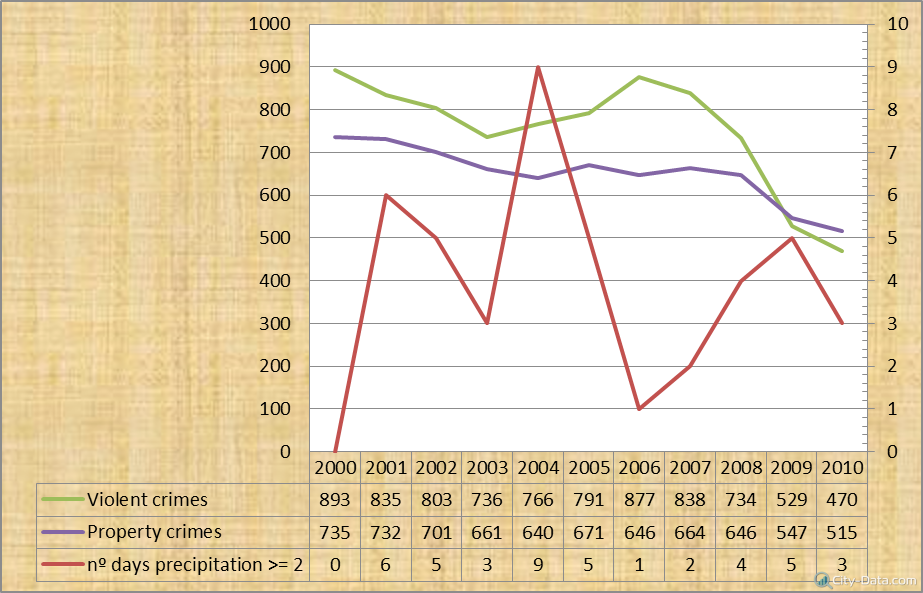 A similar trend is evident between 2006 and 2009: precipitation increases, while crimes decrease. 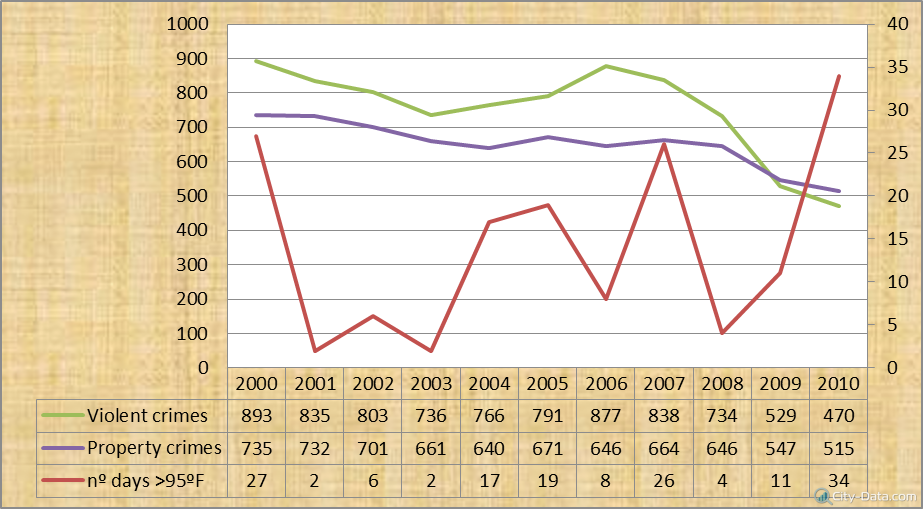 The research indicates an increase in high temperatures and little precipitation bring an increase of crime rates, with differences in violent and nonviolent crime rates in some cases. In environments with warm temperatures and little precipitation, people tend to be more active, which can be extrapolated to the crime activities.

While these trends are interesting, more research is needed between both fields. The fact that some kind of weather values show a similar tendency with those crime rates has to be consolidated by introducing other territorial and region-specific characteristics (social, economic, etc.) to affirm that this correlation is not due to other factors.

*Crime rates from Orlando, FL were taken from www.city-data.com (per 100.000 citizens). Weather data was taken from climatecenter.fsu.edu and warehouse.com (mm for precipitation; ºF for temperature).

-Butke, P.; Sheridan, S.; “An Analysis of the Relationship between Weather and Aggressive Crime in Cleveland, Ohio”; American Meteorological Society; 2010; 127-139

Currently, Alfredo is pursuing a Ph.D. in Human Geography at the University Complutense of Madrid, and has finalized his Diploma of Advanced Studies (“Aplications and Concepts about Geography of Crime: Alcala de Henares case”). He has a degree in Geography, Urbanism and Land Planning from the University of Cantabria and specialized in the fields of Sustainable Tourism (dissertation at the Universita Degli Study di Milano), Sustainability (Master in Management and Conservation of the Environment: Sustainable Development and Climate Change), Transport Planning (Investigation project at Politectico di Milano) and Urban Planning (Master in Land Planning).

Alfredo has studied the crime geography field during the last six years and has written research publications in this field. He has seven years of experience in the cartographic and geographic field working for companies with GIS software, and is also developing a crime prevention cartographic tool in collaboration with his actual job.