With minimum wage laws becoming more of a topic in 2013 (and in 2014 as well), here is a review of what the minimum wage has been across states throughout the years since 1938.

First, some background. The minimum wage was first introduced in the United States at the federal level in 1938 at $0.25 per hour. Since then, the minimum wage has increased 2,800 percent to $7.25 per hour. Interestingly, the 2,800 percent growth rate comes out to a 4.6 percent average annual growth rate, or about one percent faster than average wages have grown over the same period. 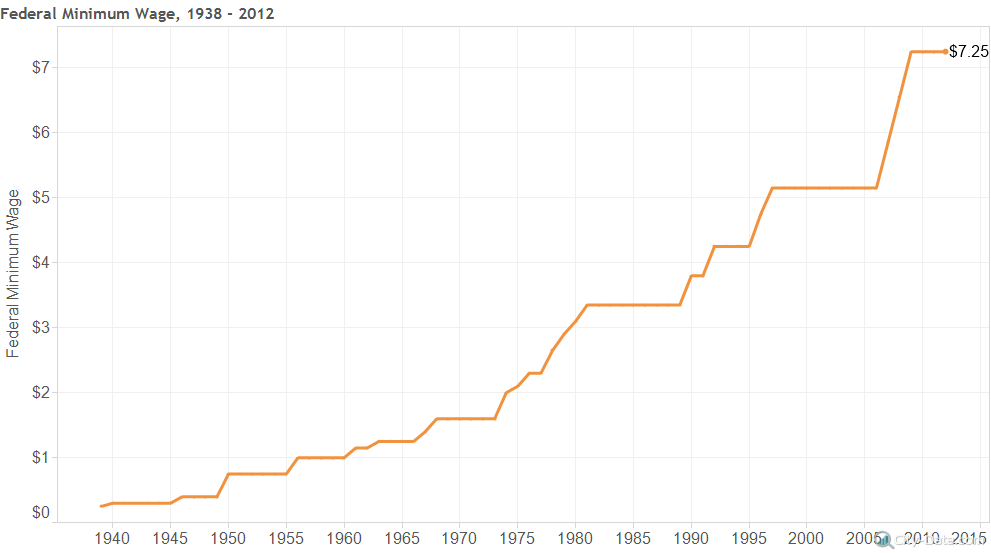 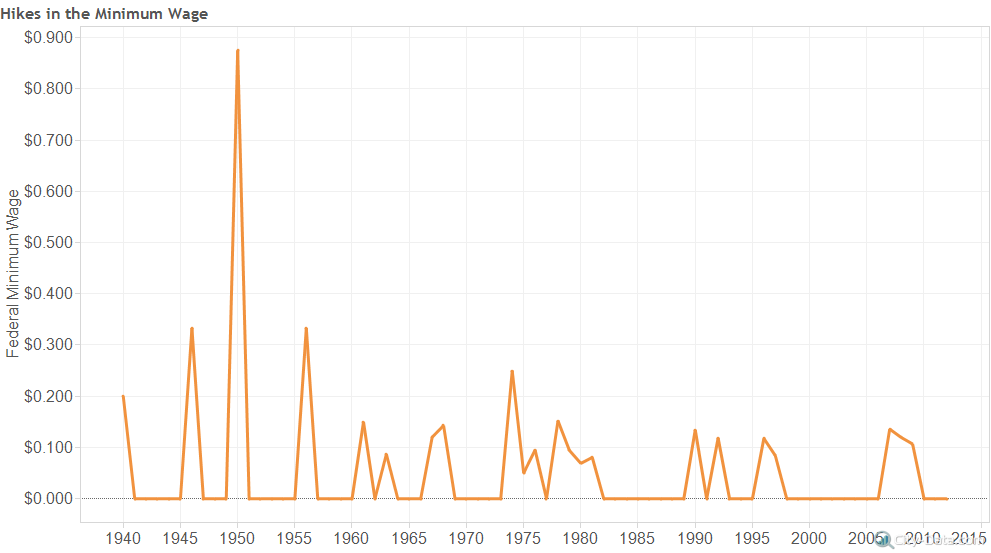 In 2013, 13 states increased their minimum wage, including:

The following animated GIF is a look at the minimum wage rates by state since 1938. The GIF clearly shows the slow uptake at the state level in elected officials’ decisions to increase the state minimum wage above the federal minimum wage.

As a whole, there are just 21 states with a minimum wage higher than the federal minimum wage, with the highest being Washington at $9.32 beginning in 2014.

With this background as the backdrop, one might ask: Why don’t more states increase their minimum wage above the federal minimum wage?

The most common answer to this is that increasing the minimum wage may decrease overall employment in the economy. After all, the increased wage cost comes out of someone’s pocket.

The debate surrounding the usefulness of increasing the minimum wage continues to this day.

Unsurprisingly, the economic studies on the impact of the minimum wage give widely conflicting reports on how big of a negative effect the minimum wage has on overall employment in a given area.

Because of the conflicting results, the following correlations are meant to help you make your own decision based on actual data. With this data, you can judge for yourself, rather than trust conflicting academic reports that probably have various academic biases, on how many jobs are lost because of minimum wage hikes.

First, here is the correlation between employment growth and the effective minimum wage by state in 2012. Does it look like there’s a positive or negative relationship? You be the judge. 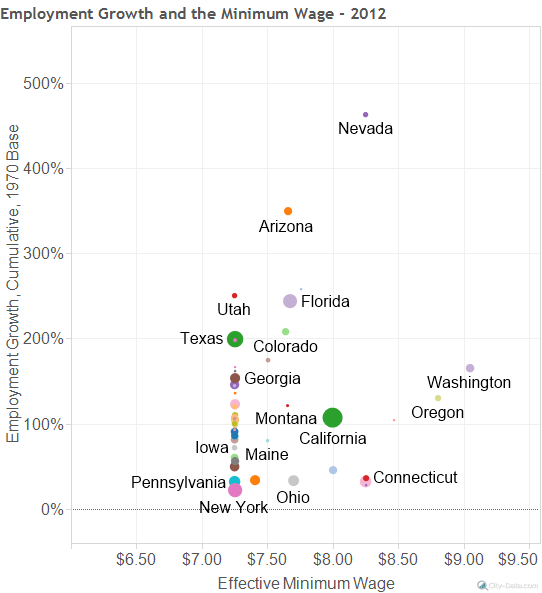 Second, here’s how that relationship has changed since 1970 in animated GIF format. (As a note: the employment growth figures are shown as cumulative because changes like this take time to have an effect.)

Does it appear as though there’s a relationship across time?

If you’re like most, it’s probably tough to tell whether there’s any relationship.

Perhaps adding a linear regression line could provide some insight. Here’s what that looks like.

Interestingly, the linear regression line — which is not statistically significant — flips between negative and positive throughout the years, although about 70 percent of the years indicate a negative relationship.

How do academics and politicians disagree with this type of evidence? The simple answer is that academics and elected officials look at specific groups, such as the effect of pay regulations (in this case minimum wage) on teenage employment, with most studies finding a negative relationship. A negative relationship indicates that higher minimum wage rates hurt teenage employment in a given area.

With the increase in the minimum wage in 13 states in 2014, it’s going to be a good year to check out the empirics on this hotly debated issue.

Overall, 13 states put higher minimum wage regulations in place in 2013. How big of an effect these higher minimum wage rates will have on overall business hiring is yet to be determined. The evidence on a state level presented here doesn’t answer the question to any level of statistical satisfaction.

2 thoughts on “What Has the Minimum Wage Done Across Time, and What Does it Have to do With Employment?”