One of the many things America does well is create wealth.  Since 1960, the total wealth created in the U.S. has grown from around $2 trillion to around $75 trillion today.

The topic here is relatively straightforward: over the past 50 years, where have people gotten richer quicker than other areas, and how has that changed over time?

Where would you guess?  Perhaps individuals living in New York or California gained wealth at a much quicker pace than people in, say, South Dakota or Mississippi because of property values?  On the other hand, perhaps it was Middle America that gained wealth the fastest because of the increased value in agricultural products? 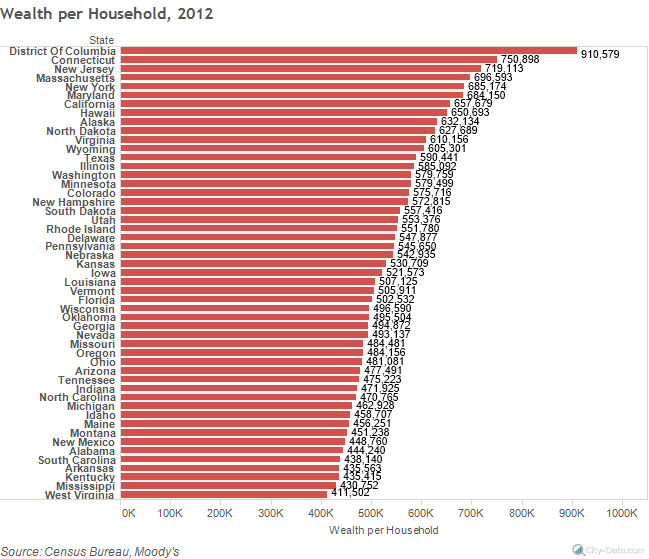 The answer: Washington, D.C. at an estimated $911,000 per household.  Government jobs in a dual-earner household are apparently a good way to accumulate wealth, or perhaps doing some private sector work connected with the government in some way.

The above figure shows the current estimate.  How have things changed over time?  Was Washington, D.C. always on top?

The following figure presents how wealth per household looked in 1960.

The following figure puts the two years side by side, with the rank of each state by year as the label.

Interestingly, there’s been a good deal of shifting throughout the years.  The top state for wealth per household in 1960 was Alaska, but Alaska dropped to 9th in the most recent figure.  The biggest losers have been households in Michigan, going from the 10th wealthiest to a bottom dweller at 41st.  Other big losers in the wealth creation game have been Nevada, Oregon, Delaware, Wisconsin, Ohio, Arizona, Indiana, Montana and New Mexico.

On the other end, households in North Dakota have been big wealth creators, up from being ranked 33rd in 1960 to ranked 10th in 2012.  Some of the other big winners include the aforementioned Washington, D.C., Massachusetts, Maryland, Wyoming, Texas, South Dakota, Louisiana, Vermont, Florida, Georgia and Oklahoma.

Has the above been a consistent trend, or does the 1960/2012 snapshot comparison leave out the ups and downs of wealth creation?

Here’s an animated GIF look at average wealth per household from 1960 to 2012 (kind of hypnotic watching what looks like a race in wealth creation in bar chart format).

As is shown in the animation, wealth creation has its business cycles and industry effects.  For instance, one can see the gain in household wealth in oil-rich states like North Dakota and Texas pretty clearly in recent years.  One can also see the decline in wealth during, for instance, the 2008 recession.

If you like visual geography, the following shows the same information in geographic form.  The color in the graph represents the rank of each state by year, with orange being the highest-ranked states (wealthier states) and blue being the lowest-ranked states (less wealthy states).  The size of the dot represents the average wealth per household for the given year (If the bar chart race wasn’t hypnotic enough, this Christmas lights geographic animation may be worth a second look).

With the current snapshot and historical trends as the backdrop, how likely are the current rankings in wealth per household to stay the same over the coming decade?  When will the poorer states catch up?  When will the financial center states lose ground?  (As a note, isn’t it interesting that the higher tax states, such as New York and California, tend to be on the higher end of the wealth per household rankings? Apparently, voters and elected officials in those states like to pick on the wealthy for their pet programs.)

Well, this question requires some industry forecasting, which is beyond the scope of this post.

One thing is relatively certain, though.  Times change, and so does wealth.  The wealthy states in 1960 were not necessarily the places where wealthy individuals settled down in 2012 (although they are weakly related).

Where wealth will be created in the coming decade will depend just as much on natural endowments as it will on how well individuals in the given state compete on a national and global scale.

Overall, households in North Dakota, Washington, D.C., Massachusetts, Maryland, Wyoming, Texas, South Dakota, Louisiana, Vermont, Florida, Georgia and Oklahoma have seen big gains in their wealth per household numbers.  On the other end, the slow wealth gainers were households in Michigan, Nevada, Oregon, Delaware, Wisconsin, Ohio, Arizona, Indiana, Montana and New Mexico.  Where exactly that shift will come in the coming decade is largely dependent upon where you think the best and brightest minds will be located.