The benefits of exercise are well-documented as crucial to overall health (Sullum, Clark, and King, 2000). Some of the documented physical benefits of exercise include increased muscle and bone strength, a decrease in body fat, and overall fitness (Blair and Rodney, 1999; Warburton et al., 2001). Physical activity also has been demonstrated to improve the health status of chronically ill individuals (Paffenbarger et al. 1986).

Despite the well-documented benefits of exercise, estimates provided by the Centers for Disease Control and Prevention (CDC) indicate that “40 percent of the population of the United States does not exercise” (CDC.gov, 2013). Further, according to Troiano et al., “Only 3.5 percent of Americans between the ages of 18 and 59 do the minimum amount of physical activity recommended by the Department of Health and Human Services. Among those over age 60, the percentage is even lower: 2.5 percent” (2008). The CDC estimates that these numbers could be much worse, stating that “80 percent of American adults do not reach the recommended level of exercise” (CDC.gov, 2013).

Variance in exercise activity across populations

A number of studies have examined the influence of geographic location (urban or rural) on levels of exercise, concluding that adults living in rural locations are less likely to exercise than their urban counterparts (Brownson et al., 2000; Bertrains et al., 2004). Further, a study by Satcher revealed that levels of obesity positively correlates with decreasing population density. The findings indicated that “the lowest incidence of obesity was in large central metropolitan areas and highest in counties with no city greater than 10,000 residents.” 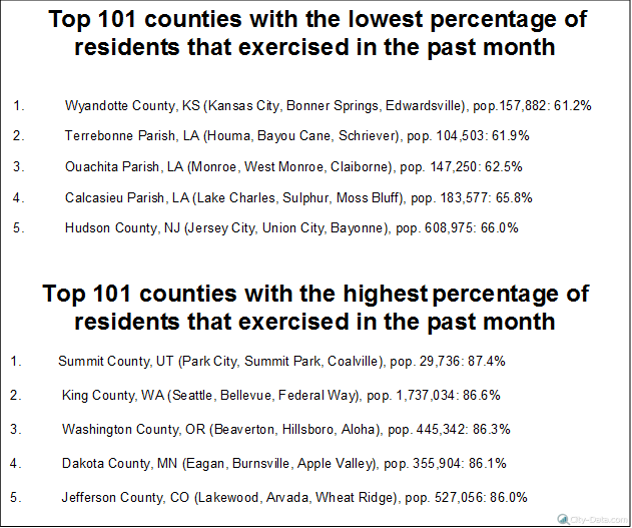 When examining the correlation between population size and amount of exercise, it appears that there are particular factors that would account for the observation that counties with less population tend to have less exercise activity. This is a particularly interesting trend since it has not always been this way; only recently have more rural areas experienced an increase in obesity (with a corresponding decrease in exercise) in contrast to urban populations (Tai-Seale and Chandler, 2010). It thus makes sense to look into possible factors that would explain this fairly recent development. 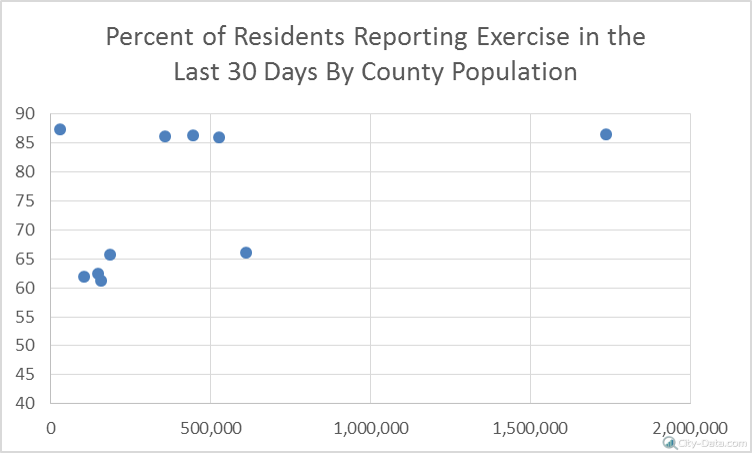 Numerous explanations of this trend have been proposed in the literature, and it is quite probable that there are multiple reasons why physical activity is more prevalent in urban environments than in rural, less-populated regions. For example, it has been suggested that individuals living in more rural contexts do not have readily available access to nutritionists, compared to those who live in urban, metropolitan areas. Along similar lines, it has also been argued that nutritional education in rural environments is sparse (Tai-Seale and Chandler, 2010), which could lead to a lack of understanding of the need to exercise.

Besides the role of population density, a body of literature also correlates poverty with rates of exercise activity. The accepted assumption in this literature is that lower socioeconomic status populations are less likely to exercise due to barriers presented by social and environmental factors. Some of these barriers include long distances to important daily destinations, lack of meaningful transportation choice, unsafe neighborhood and traffic conditions, poor access to parks and recreational facilities, air pollution, lack of time, poor health and lack of social support for exercise. While many of these barriers also exist for other income groups, they often exist to a greater degree in low-income communities. 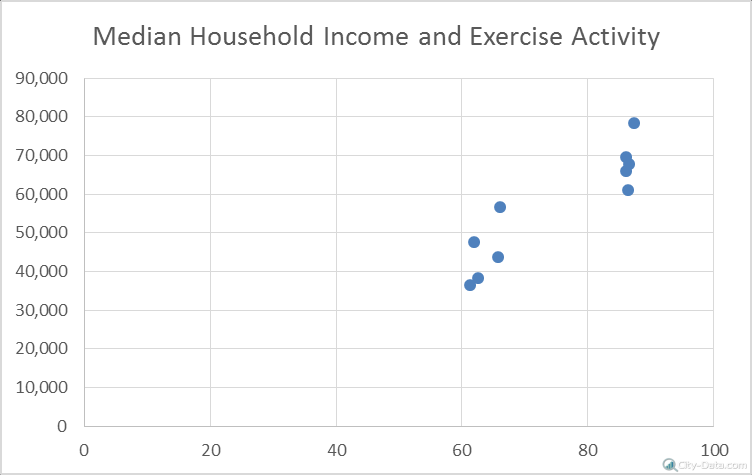 This article has briefly overviewed two observations related to the demographics of exercise and physical activity: the first observation is that those inhabiting less-populated, rural regions generally exercise less frequently than urban dwellers, and the second observation is that a lower household income is correlated with less physical activity. Might it be possible to construct a hypothesis that would tie these two observations together? More specifically, is it plausible that a central reason why households with lower incomes tend to experience less physical activity is precisely because rural households, in general, do not have as high of incomes as metropolitan households? If this were indeed the case, it would perhaps shed some light on why rural regions have lower levels of physical activities. Public policy could thus be shaped around this observation.

In 2011, data was gathered that demonstrates that urban households receive 32 percent more income than rural households (Hawk, 2011). This is due to various reasons, including a higher number of college graduates in urban environments than in rural areas. Thus, it is well-known that urban inhabitants typically have higher incomes than rural residents. What are the implications of this? It is at once apparent that higher-income households have access to superior health services compared to households with lower income. This would lead to better nutritional education for those who have higher incomes, and thus more physical activity. Other arguments could be made as to why households with higher incomes are typically more physically active, but the primary point is this: rural residents have but limited access to quality health service, in contrast to their metropolitan counterparts. Health policy should thus be structured such that it is more sensitive to the demographics behind exercise activity.