An annual study conducted by the Robert Wood Johnson Foundation provides insight into health outcomes at the county level, which often are not captured in statewide health indicators conveying the health status of a state’s population.  From the Robert Wood Johnson Foundation data a number of indicators were incorporated to rank each county’s overall health status. These indicators incorporate measures of population health: risk behavior, such as alcohol and drug consumption and environmental factors, such as food options and the state of the physical environment. The table below displays the 50 unhealthiest counties in the United States ranked by the number of days per month its residents indicated were poor health days. As Figure 1 indicates, the vast majority of the unhealthiest counties in the United States are located in the southern part of the country. When examining this data, one can arrive at some broad assumptions regarding widespread health habits in these counties, which lends some insight into their status as the unhealthiest in the nation. Looking at the top 20 unhealthiest counties when ranked on the measure of reported monthly poor health days[1], the following counties fill out the top 20. 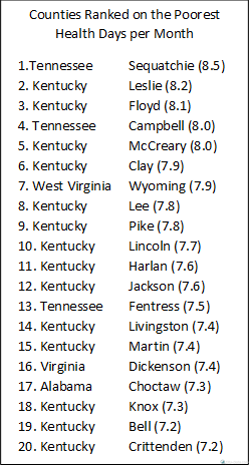 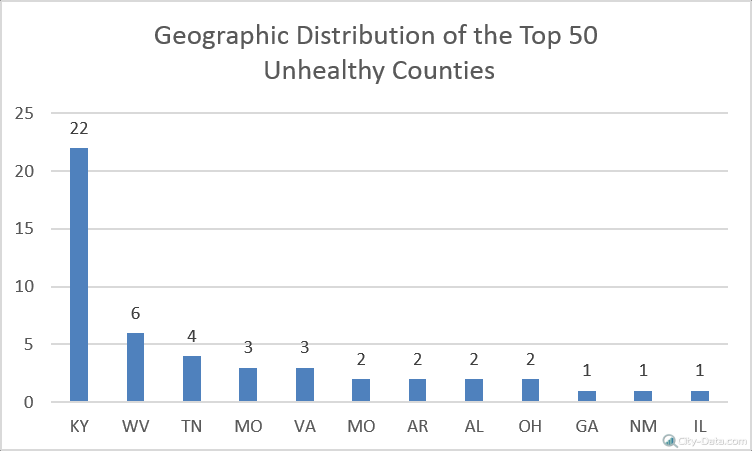 A body of academic literature examines the role of socioeconomic variables in the health outcomes of populations. A number of studies have proposed a statistical relationship between income and health outcomes (see Figure 2). Particularly, these studies have examined the role of poverty and income inequality in relation to higher mortality rates among a population. A number of studies have also examined the indicators of population health and income revealing that on a general level, areas with a higher rate of poverty display poor rankings across a number of measures when compared to areas with a lower poverty rate. When examining the metric of median household income, intuition would dictate that an area with a lower median household income would perform more poorly on overall health, particularly that of reported poor health days as a proxy for the presence of chronic illness among a population. Using the counties displaying the 10 highest rates of monthly poor health days as a case study, the evidence presented below indicates that median household income offers a metric for predicted poor physical health. 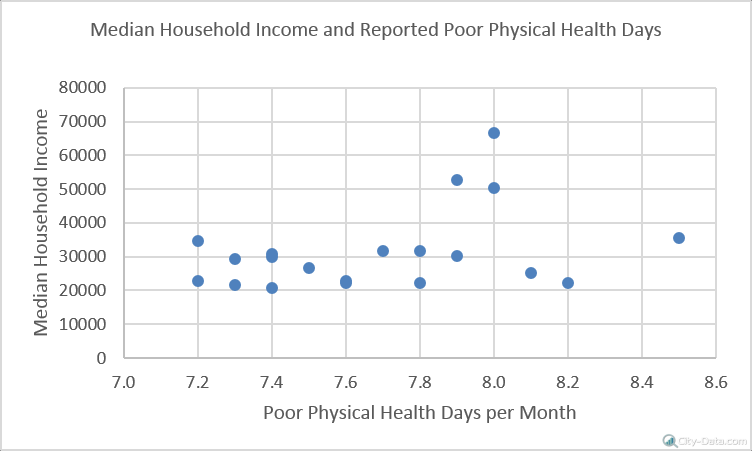 Although poverty is a useful means to predict physical health, it would nevertheless be misleading to conclude that there are very few other factors at work.  The data presented in Table 1 is remarkable precisely because of the geographic distrib23utions of these 20 counties: they are all located in the Southern United States. However, the poorest counties in the U.S. are not in the South: they are located in South and North Dakota, as well as Texas. Thus, there is some reason to suspect that there are some intrinsic characteristics of the counties in Tennessee and Kentucky – other than poverty – that would account for a high ranking of monthly poor health. This is an especially interesting question because Tennessee and Kentucky are not particularly poor states (the median household income in Kentucky, for example, is well above the median of other states). A thorough examination of what might explain this is beyond the scope of this article; however, it is clear that this is an avenue that is ripe for further research. Whether it is health care accessibility, cultural elements, or some other underlying factor that, along with poverty, drives up the monthly poor health rating of counties in Tennessee and Kentucky (and a few other states, such as West Virginia and Alabama) remains to be seen. Shedding light on this question would undoubtedly be a crucial stepping stone towards creating policies that would help lower the poor physical health ratings of these counties.

In conclusion, the available data suggest that poverty is strongly correlated with poor physical health in counties in the United States. Moreover, the data also indicate that the counties with the highest monthly poor health ratings are all in the Southern United States — a striking observation that is not explained by poverty alone.

[1] Number of days in the previous 30 days when a person indicates their activities are limited due to physical health difficult – See more at http://www.americashealthrankings.org/all/PhysicalHealth#sthash.NqSWRfuO.dpuf