One of the most common New Year’s resolutions is to start working out and get back in shape. While this is a noble goal, experience and evidence show that two out of every three people lose sight of their New Year’s fitness plans after just a few weeks.

This state of affairs is particularly relevant considering that one of the defining issues of the Obama presidency was health care. Lifestyle, diet, and a commitment to personal fitness are major factors in controlling the high cost of health care.

Most Americans are well aware of this, but data show that many people continue to engage in a variety of unhealthy activities and do not get enough exercise. It turns out, however, that the extent to which people lead an unhealthy lifestyle has a strong geographic component. In other words, some places display healthier behaviors and have a healthier population than others.

The reasons behind the uneven geography of health are complex. To get a better handle on this issue, Bridget Catlin of the University of Wisconsin and a team of researchers produced the County Health Rankings dataset. This is a nationwide dataset that examines health factors (behaviors) and health outcomes (the products of those behaviors). Health factors include well-known unhealthy behaviors such as smoking, obesity, excessive drinking, the physical inactivity rate, the motor vehicle mortality rate, the premature death rate and the teen birth rate. Health outcomes include the percentage of people in fair or poor health, the average number of physically unhealthy days, the average number of mentally unhealthy days and the percentage of babies born underweight.

In the original County Health Rankings dataset, each county is ranked relative to other counties within its own state. While this information is useful for policymaking at the state level, it is not conducive to regional or national comparisons. To get an idea of geographic disparities in health at the national level, it is necessary to standardize the individual health factors and health outcomes data (e.g., assign a z-score) and then rank each county according to the sum of the standardized scores.

Standardizing the data makes it possible to examine patterns at a few different geographical scales. We can start at the state scale to get an idea of which states are healthiest overall. In general, states in New England and the West occupy the top of the list. Connecticut, Utah, Rhode Island, Minnesota and Vermont have the highest average scores for health indicators.

In contrast, all of the 10 least healthy states and 14 of the bottom 20, are in the Southeast. Mississippi and Kentucky top the list, followed by Alabama, South Carolina and Louisiana. Virginia, the 29th healthiest state, is the highest-ranked southern state on the list. 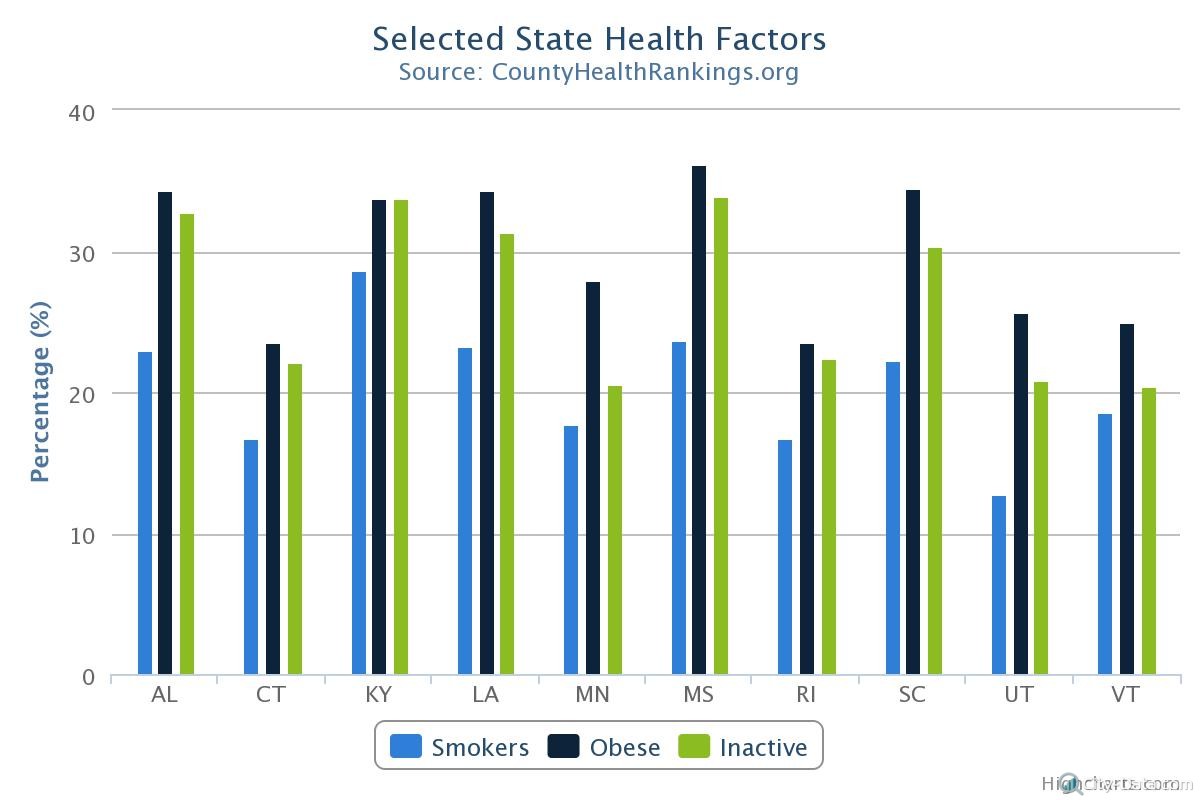 Since the original data are at the county level, it is possible to aggregate each county according to its respective metropolitan statistical area (MSA). Once aggregated, the scores of the component counties are averaged to compute the MSA score.

At the city level, western MSAs stand out as being the healthiest overall. Boulder, Colorado tops the list of 357 cities, followed by several cities in Utah, California, Oregon, Washington, New England and certain college towns like Lawrence, Kansas and Ann Arbor, Michigan.

At the other end of the spectrum is Huntington, West Virginia followed by Lawton, Oklahoma and Mobile, Anniston and Montgomery in Alabama to round out the bottom five. A host of other smaller cities in the Southeast and parts of the deindustrializing Midwest such as Sandusky, Ohio and Flint, Michigan join them at the bottom. 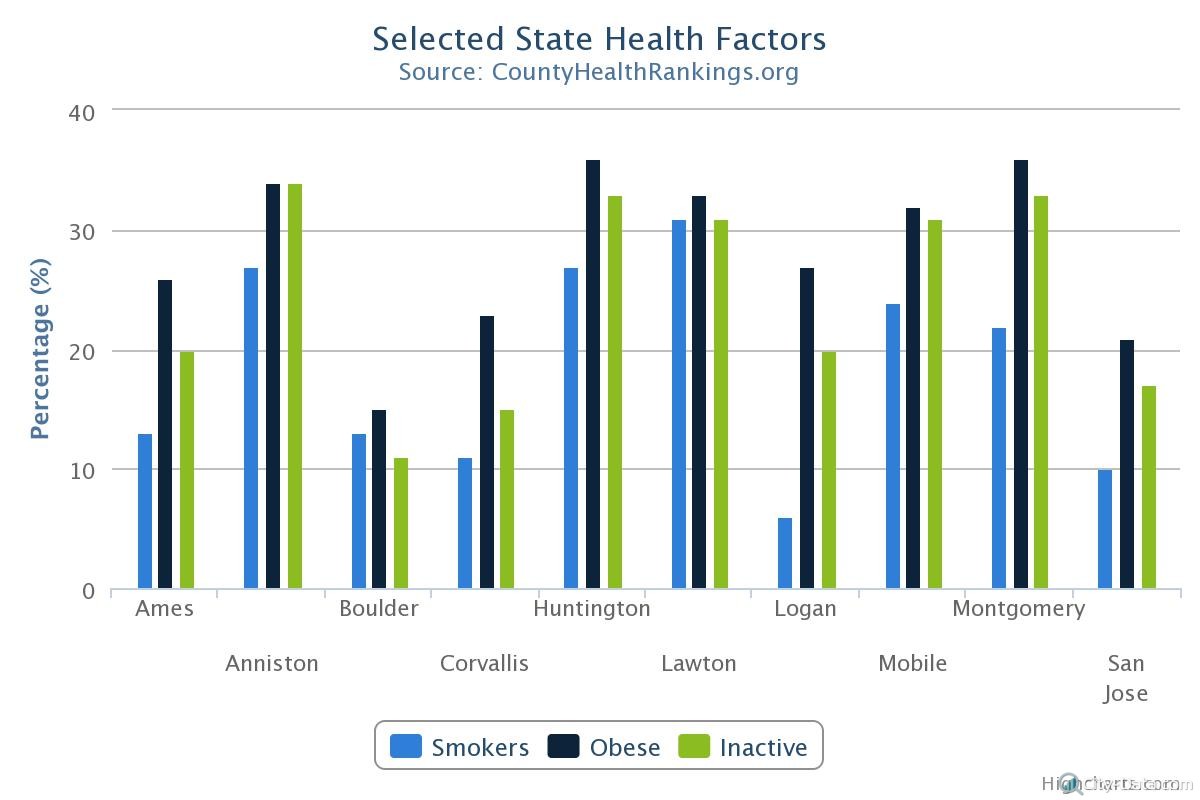 That Boulder and Huntington are at opposite ends of the health spectrum is hardly a surprise. Huntington, after all, gained notoriety as being the unhealthiest city in America in 2010 when it was featured on Jamie Oliver’s “Food Revolution.” Health survey data, therefore, confirm what we already know, but fail to answer a few important questions. Why is the geography of health so uneven? Why do cities in the Southeast fare so poorly compared to their counterparts in the West in regards to health?

Concrete answers to these questions remain elusive. A study by the American College of Sports Medicine also shows that healthier communities have more space dedicated to parks and recreational activities, more public transportation and more farmers’ markets than unhealthy ones. By and large, these factors are correlated with socioeconomic status and educational attainment, which are widely known to have a relationship to health.

For example, the rate of leg amputations in New Hampshire, Vermont, Utah, and Colorado is around 4.5 for every 10,000 Medicare patients. This rate increases to 10 in Texas, Arkansas and Louisiana, and even reaches 12 in Mississippi. In Massachusetts and New Hampshire, three-quarters of female Medicare enrollees between the ages of 67 and 69 have had at least one mammogram in the past two years, but in Oklahoma and Mississippi, that figure is below 60 percent.

In addition, patients undergoing end-of-life care in 2010 averaged nearly three times more physician visits per decedent in New Jersey, Nevada, and Florida than in Idaho, Utah, and Montana. There are many comparisons of this sort that can be made using the extensive data from the Atlas. 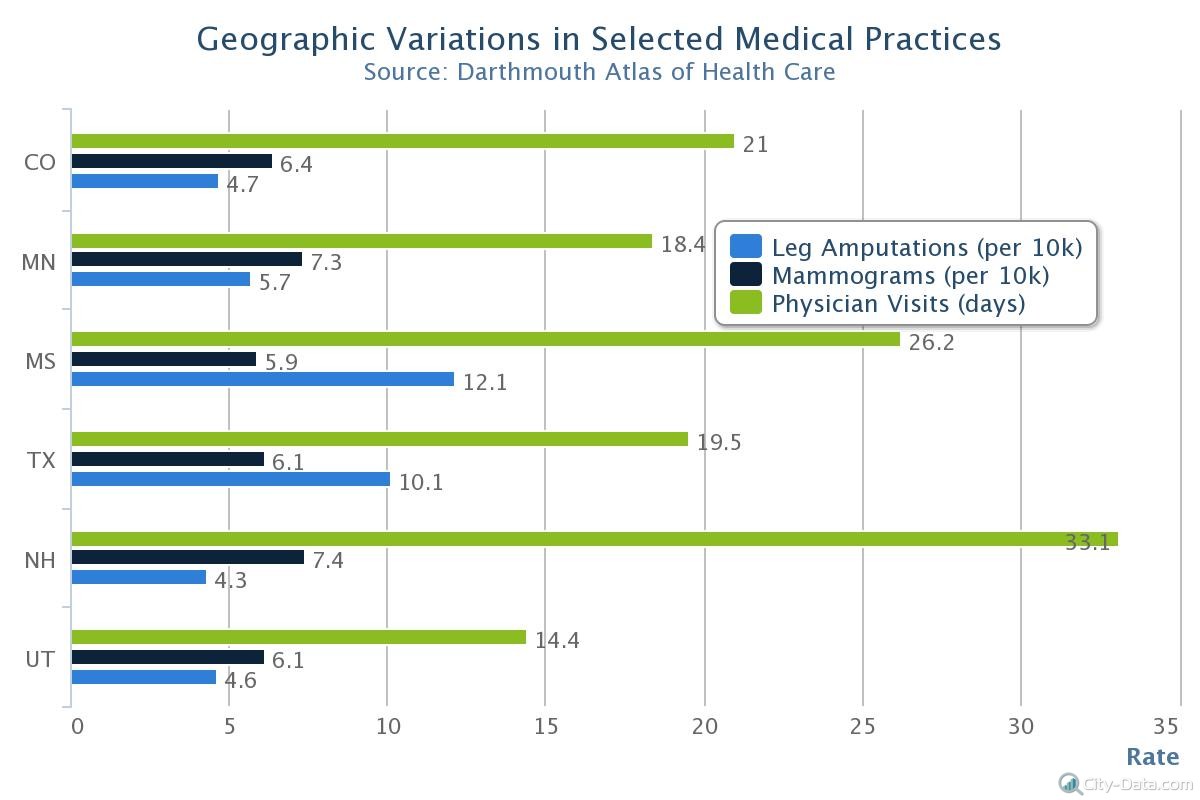 These numbers show that factors affecting health care in America are far more complex than they appear. On the surface, geographic disparities in health appear to be a function of socioeconomic status. As Richard Florida wrote, healthy lifestyles are intimately linked to “the nature and structure of our culture and society.” Indeed, there is plenty of empirical evidence to support that claim. In addition to economic, societal and cultural influences, however, there are substantial geographic differences in the practice and delivery of health care services. These differences, in turn, have measurable impacts on the well-being of the people who live in the respective service areas.