To anyone considering renting out their property on Airbnb, there is one extremely important question: How often will my property be rented? Sure, the daily rate may seem attractive for many, but if you don’t attract a lot of guests, the whole offer may not be near as lucrative.


On average, the occupancy rate (the percentage of time your property is rented — and makes you money) hovers at just below 50 percent in the U.S. This, of course, largely depends upon your pricing strategy as well as the property’s location.


Another important factor that may influence your decision to create a listing on Airbnb is whether you would have guests year round. In some cases, it may be a wiser choice to make your space available for just a few months each year.


Luckily, there’s a way to estimate how the occupancy rate changes between high and low seasons based on the data available from Airbnb itself. There’s one important thing to note for the sake of completeness: The following study is based on review dates, which usually happen a few days after a rental period is over.


We made the usual assumption of half the guests leaving reviews. The average stay length that we are using is available directly from Airbnb. Here’s how average occupancy rate changes throughout the year: 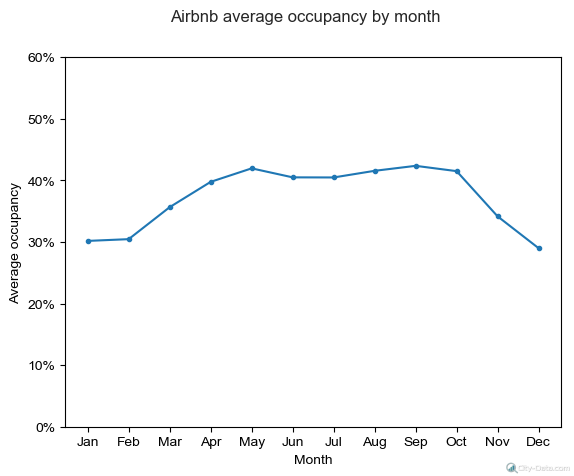 According to the chart above, the average occupancy rate during the high season can be as much as 1.5 times higher than during the low season.

Let’s see how the picture changes once we group the properties by location; surely, cold weather must impact some cities more significantly than others. 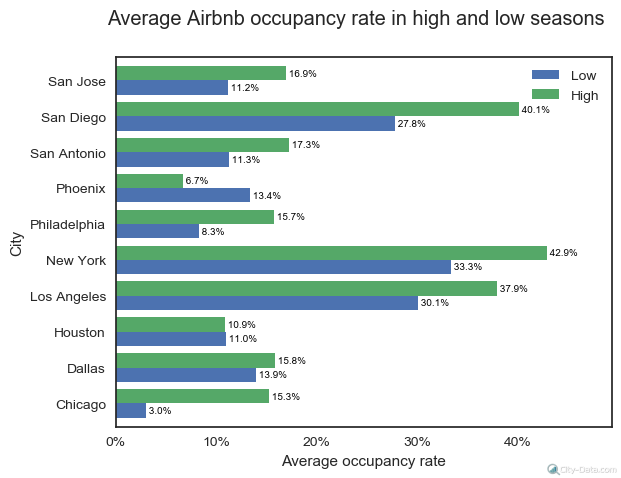 While the numbers are relatively normal in New York, Los Angeles and San Diego, other cities provide some interesting outliers. The numbers in Houston and Dallas are more or less stable year round. Chicago is especially notable — its summer occupancy rate is already pretty low, but it seems that almost no one visiting the city in winter uses Airbnb.

One thought on “Should you rent out your space on Airbnb year round?”