Art majors, it is assumed, are doomed to the “starving artist” life of struggle and waiting tables. That is why at first glance it seems paradoxical that the presence of artists in a city is correlated with economic vitality and urban revitalization.

More precisely stated, artists themselves are not necessarily responsible for economic vitality. However, as economist and sociologist Richard Florida has shown, their geography positively corresponds to the geography of highly-educated and economically productive workers like doctors and engineers.

These high-income individuals have the buying power to support local businesses including art galleries and cultural events and to make investments in real estate. Rather than going to the suburbs and exurbs, they show a strong tendency to flock to live downtown neighborhoods with unique bars, cafes, galleries, and nightlife. In this context, artists help create an authentic and edgy urban milieu that is attractive to highly-educated workers.

Furthermore, concentrations of artists signal the sort of open and tolerant social environment that Jane Jacobs argued is essential to innovation and creativity. Since these are two essential components of the modern economy, getting a better understanding of the geography of artists has become an important concern in academic and urban policy literature. In addition, cities across the U.S. have attempted to attract artists and other creative types in the hopes of sparking revitalization.

The most accessible way to figure out where artists live is to use occupational data from the U.S. Census. This method shows that the geography of artists more or less follows the geography of the population in general. New York and Los Angeles, the two largest cities, are also home to the largest populations of artists, while San Francisco, Chicago, and Washington, D.C. round out the top five cities where artists live. In both absolute and proportional terms, these five cities stand out as being the most artistic.

Even though these conclusions seem logical, they depend on a dataset that offers a very narrow definition of what it means to be an artist. In other words, it assumes that an artist is an individual who works full-time in an occupational category defined as being “artistic” by the government.

Despite its practicality, this definition has many obvious shortcomings, especially when one considers how the nature of artistic and creative work has changed in the past 10 years. While there have always been creative people who produce artsy things as a hobby, making a living was limited to those who had a local market willing to buy those products. These days, thousands of people overcome this geographic limitation by selling their arts and crafts online. Since its emergence in 2005, Etsy has become the most popular online marketplace for arts and crafts.

Using a sample of over 250,000 self-reported locations of Etsy sellers, it was possible to examine the geography of artists who sell online but are not necessarily categorized as an “artist” in the census.

In absolute terms, four of the top five cities for artists are unchanged. The five cities with the most registered Etsy accounts comprise nearly one-quarter of the dataset, while one in six accounts are registered in the three largest cities in terms of overall population. This result is to be expected.

In contrast to the official data, however, a different picture emerges if we look at concentrations of artists relative to the local population. With respect to urban policy and what artists mean for the local quality of life, this is an important difference. If the size of the total population dwarfs that of the artist population, their effect on the urban milieu will likely go unnoticed. Conversely, if artists stand out as a significant presence in a city, they are much more likely to influence the local aesthetic. 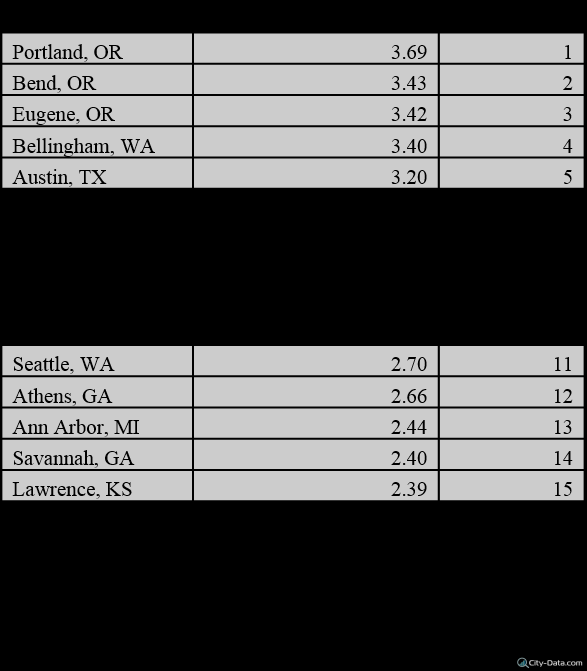 While location quotients using official data closely correlate to the size of the city, those using Etsy data show the highest concentrations of artists in smaller cities. In fact, artistic Los Angeles drops to 69th, and New York drops out of the top 100. Cities that do particularly well in the Etsy rankings are those in the Pacific Northwest and those that are known for having a strong counterculture, such as Austin, Texas and Asheville, North Carolina. Quintessential college towns such as Ann Arbor, Michigan and Athens, Georgia also show high concentrations of Etsy artists.

In some ways, these findings tell us what anyone who has been to a place like Asheville or Bend already knows. These are towns with a high quality of life that produce an abundance of great art. With respect to urban policy and academic discussions regarding the so-called geography of creativity, however, the results point to a need to reexamine the current state of research. 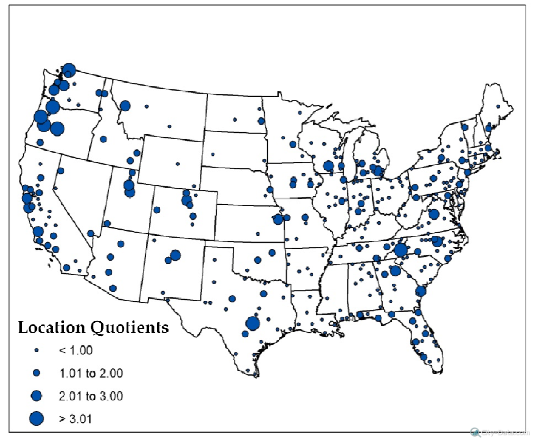 The strong correlations suggested between the geography of artists and that of scientific and technical professionals are primarily a result of a dataset that defines professional artists in a very traditional sense. This has led some academics and urban policy analysts to position artists at the center of urban revitalization strategies based on the experiences of only the largest cities, which are not necessarily appropriate for all cities. Concentrations of artists may signal a high quality of life but are not necessarily the fuel that powers the economic engines of New York and Los Angeles.

Future urban policy studies, therefore, should move away from viewing artists as part of an economic development strategy and focus more on how smaller cities have managed to foster a strong artistic community while at the same time sustaining a high quality of life for everyone.