When the Bureau of Labor Statistics published its Occupational Outlook Handbook, many hurried to be positive on how the job market will change by 2020. More jobs and higher educational requirements were among the most acclaimed achievements to come.

The much-celebrated 20.4 million employment increase over the next 10 years will be, in fact, the lowest increase in the last three decades, lower than the rate exhibited in the previous 10-year timeframe with the economic recession of 2007-2009. The Bureau of Labor Statistics says the low rate is explained by the negative demographic effect the U.S. labor market is currently experiencing: a large segment of the population is moving from an age group with higher participation rates to an older age group with lower participation rates.[i]

Firstly, the aging baby-boom generation moves from the “prime-age” working force (25-54) into the 55+-age cohort. Secondly, the share of the baby-bust generation increases in the prime-age cohort. By 2020, the prime-age will increase at a low annual rate of 0.2 percent while the 55+-age cohort will be the fastest-growing among all age groups – 3.3 percent. Roughly put, by 2020, almost every fourth employed person will be 55 or older. The young labor force (16-24) will experience the most dramatic change and will decrease its share in the labor force by 12.4 percent (Chart 1).

By 2020, almost every fifth (18.6 percent) person in the labor force will be Hispanic. This growth – the highest among ethnic groups – is due to a significant increase of the Hispanic population in 2000-2010 by 10 million and projected increase by another 12.4 million by 2020, reaching more than 46 million or 17.5 percent of the population (Chart 2). The growth in the black labor force or the decline in the white labor force will not be very significant, but Asians will almost double their presence in the labor market.

Many analysts make rather hasty conclusions about how important education will become in the labor market. Occupations requiring doctoral and master’s degree will show the highest growth rate: 19.9 and 21.7 percent respectively (Chart 3). About 1,307.8 thousand new jobs will require doctoral and master’s degrees, which is 6.3 percent of the total projected job growth (20,468.9 thousand). Despite the lowest increase rate among educational degrees, bachelor’s degrees will remain the most-wanted degree in 2020. Almost 18 percent of new jobs (3,656.1 thousand) will have such a requirement.

Four out of five jobs will not require any work experience. In general, the lower the work experience requirement, the higher the growth rate of an occupation will be (Chart 5).

While there will be no significant growth in high-salary jobs, 28 percent of the employed population will hold low-wage jobs as it did in 2010. Four out of five occupations with the highest concentration of low-salary jobs (less than $23,005 annually), will grow by 2020.[iii] Among the top five occupations with the largest increase (Chart 6), only registered nurses will require a degree, and none will require any work experience.

With the highest number of job openings, no required work experience, only a short-term on-the-job training, associate’s degree and a median annual salary of $64,690, registered nurse will be a good pick for many job hunters. 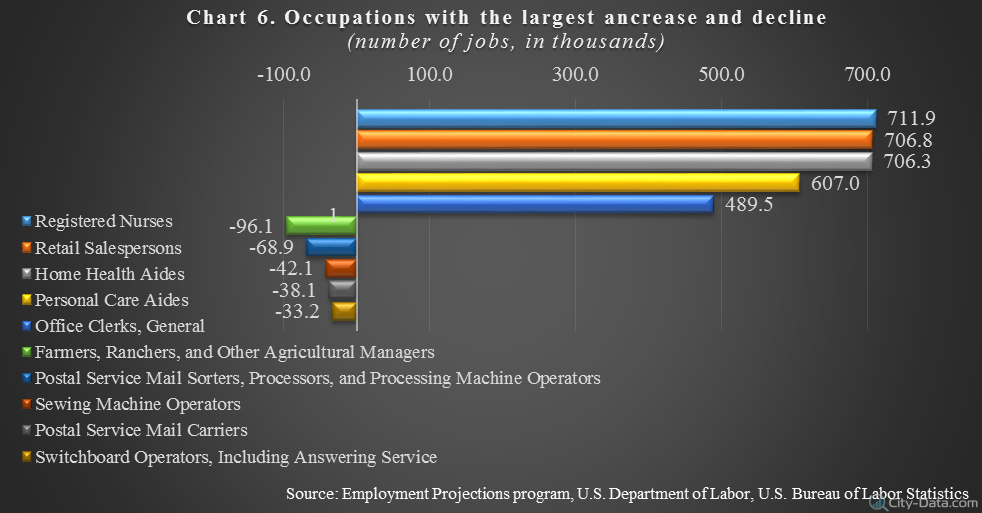 In terms of local specificities, California is projected to have the largest increase in jobs – 2,595,000 by 2020, or 639,190 jobs annually. Utah is the first with its job growth rate: 24.2 percent. California, Texas, Florida, New York and Virginia together will account for about a quarter of all job openings by 2020. The occupations with the largest growth are more or less the same for all states – retail salespersons, cashiers, waiters, personal care aids, combined food preparation and serving workers (all requiring less than high school education), customer service representatives requiring a high school diploma and elementary school teachers requiring a bachelor’s degree. 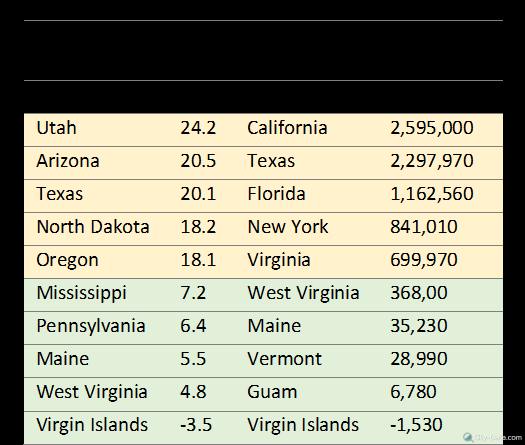 With student loans being the second-largest population debt after mortgages and reaching the threshold of 1 trillion USD this year,[iv] whether the labor market will be able to provide young college graduates with enough well-paid jobs to pay off their debts is a vital question for today’s high-school students and their parents. The prospects of the labor market shows the 16-24 age cohort will be the most vulnerable in terms of job security in 2020. With the slow growth rate of the labor market and large share of low-paid and low-educated jobs in new openings, the risk of investment in college education increases. Studies like Georgetown University’s may convince us that investing in a college degree is worth the taking the risk, but anyone thinking about college should bear in mind that today more than half of graduates have jobs that do not require the level of education they have paid for.[v]

[ii] The Georgetown University Center on Education and the Workforce, “Recovery: Job Growth and Education Requirements through 2020”, June 26, 2013; http://www9.georgetown.edu/grad/gppi/hpi/cew/pdfs/Recovery2020.Press%20Release.pdf

2 thoughts on “More Jobs for Less Educated, Experienced and Paid by 2020”