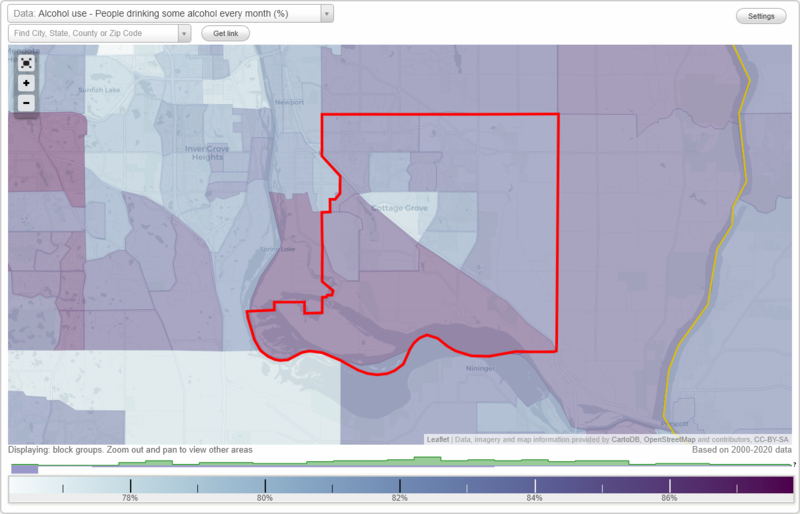 Forty eight percent of Cottage Grove residents report that their diet is generally healthy. People here have milk to drink or on their cereal 21 times per month. This includes chocolate and other flavored milks, as well as hot cocoa made with milk, and does not count small amounts of milk added to coffee or tea. People living here eat an average of four meals (breakfasts, lunches or dinners) per week that were prepared away from home in places such as restaurants, fast food places, food stands, grocery stores or from vending machines. They get two of these meals from a fast-food or pizza place. People here eat two "ready to eat" foods such as salads, soups, chicken, sandwiches and cooked vegetables per month. They also eat four frozen meals or frozen pizzas on average monthly.

The average Cottage Grove resident last visited a dentist two years ago (including all types of dentists, such as, orthodontists, oral surgeons, and all other dental specialists, as well as dental hygienists). Seventeen percent of people living here 30 years of age and older, are embarrassed because of their teeth, mouth or dentures. Twenty two percent think they might have gum disease (might have swollen gums, receding gums, sore or infected gums or loose teeth). Cottage Grove residents rate the overall health of their teeth and gums on average at 46 percent. People living here aged 30 years and older, aside from brushing their teeth with toothbrush, use dental floss or any other device that clean between teeth on average three days per week. They also use mouthwash or other dental rinse products to treat dental disease or dental problems an average of three days per week. The average person living here (including children) has 24 teeth.

The average height of Cottage Grove residents 16 years and older is 67 inches. The average weight is 183 pounds. Their average BMI (Body Mass Index) is 29. Thirty nine percent of people living here are obese. Fifty percent have ever been obese. Thirty seven percent have ever tried to lose weight.

Eight percent of people living in Cottage Grove have ever been told by a doctor or health professional that they have diabetes. Forty four percent of people had a blood test for high sugar or diabetes within the past three years. Three percent of city residents are currently taking insulin.

Cottage Grove residents 20 years and older on average get up to urinate one time at night (from time they go to bed at night until the time they get up in the morning).

Seventy two percent of people living in Cottage Grove are covered by health insurance or some other kind of health care plan.

Twenty six percent of Cottage Grove residents 18 years old and older have usually little interest or pleasure in doing things. Twenty eight percent often feel down, depressed, or hopeless. Forty four percent of people living here have trouble falling or staying asleep, or sleep too much. Fifty three percent of people often feel tired or have little energy. Twenty eight percent are bothered by poor appetite or overeating. Twenty three percent often feel badly about themselves, that they are a failure or have let themselves or their families down. Twenty one percent have trouble concentrating on things, such as reading the newspaper or watching TV. Fourteen percent of people living here move or speak so slowly that other people could have noticed, or the opposite - being so fidgety or restless that they have been moving around a lot more than usual. Five percent have thoughts that they would be better off dead or of hurting themselves in some way.

Cottage Grove residents 16 years and older usually get seven hours of sleep at night on weekdays or workdays. Thirty four percent of them have trouble sleeping.

People living in Cottage Grove report their general condition of hearing on average at 80 percent. Seventy seven percent of them can usually hear and understand, without the use of a hearing aid or any other listening devices, what a person says without seeing his or her face if that person whispers to them from across a quiet room. Ninety five percent of people can hear a normal voice across a quiet room. Twenty percent of Cottage Grove population have been bothered by ringing, roaring or buzzing in their ears or head. Forty five percent of people living here have ever had a job where they were exposed to loud sounds or noise. Loud means so loud that they must speak in a raised voice to be heard. Seventeen percent of people in Cottage Grove had off-work exposure to loud noise.

Twenty one percent of Cottage Grove residents 40 and older take a low-dose aspirin each day to prevent heart attacks, strokes or cancer.

Eighteen percent of Cottage Grove residents 20 or older have limitations caused by a long-term physical, mental or emotional problems or illnesses keeping them from working at a job or business. Twenty three percent are limited in the kind or amount of work they can do because of physical, mental or emotional problems. Seven percent have difficulty walking without using any special equipment. Nine percent are limited in any way because of difficulty remembering or because they experience periods of confusion. Five percent of people here have health problems that require them to use special equipment, such as a cane, wheelchair, special bed or special telephone.