Of the many lessons that we learned in the aftermath of the Great Recession of 2008, one of the most glaring is the persistent gap between the so-called “haves” and “have-nots.” While that gap is true on an individual level, it is also true in a geographical sense.

Whereas some places experience job loss and consistently high unemployment, others show strong signs of recovery and even growth. In fact, places like Washington, D.C., San Francisco and New York have proven to be magnets for what economic geographer Richard Florida refers to as “talent.” That is to say, these cities offer high salaries and plenty of opportunities to people who hold advanced degrees, especially in the computational and technical sciences and in the financial industry. Numbers regarding job openings and hourly wages from the Bureau of Labor Statistics back up the assertion that large, economically diverse cities are doing quite well for the skilled and talented.

These post-recession success stories have received a lot of attention, and deservedly so. They are nodes of productivity and innovation that drive our economy forward, and have shown great economic resilience. At the same time, however, trends in the largest cities are often analyzed at the expense of those in smaller cities. The result is that we get an unbalanced picture of how cities are faring economically in a general sense. Considering the United States has 381 Metropolitan Statistical Areas (MSAs, places with over 50,000 residents), there is a lot of room for additional analysis.

With that in mind, I am interested in how things are going in those hundreds of small- and medium-sized cities. Of course, one’s definition of “small” or “medium” is up for debate. For the purposes of this post, we are only considering MSAs with a population of less than two million according to the 2010 Census. In case you are wondering, 350 of the 381 MSAs officially have less than 2 million people, from Columbus all the way down to Carson City.

In order to get a basic picture of economic welfare in these 350 smaller cities, I consulted data from the Bureau of Economic Analysis concerning various aspects of income and employment.

To make sense of how these different cities diverge from one another along income and employment lines, I identified types of cities based on similarities they share in these data using cluster analysis. The results yielded four distinct groups that offer additional insights into the urban economies of small- and medium-sized cities. 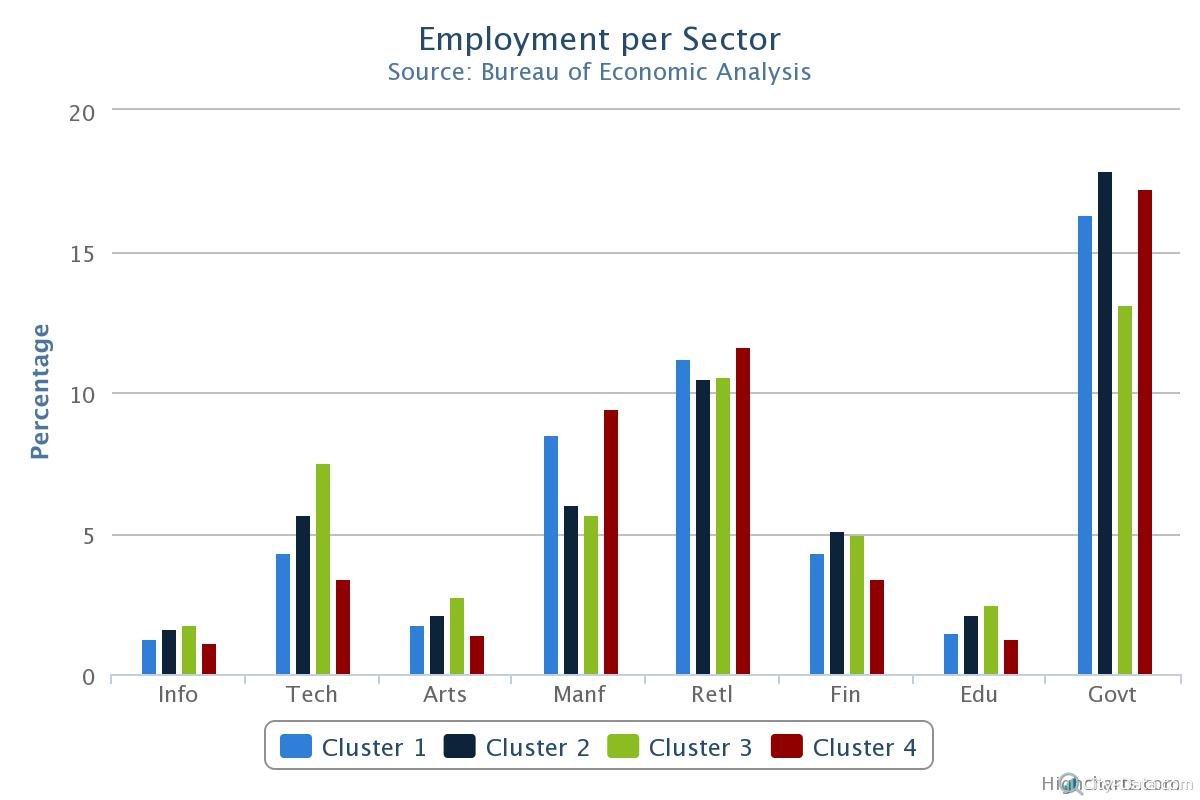 On one end of the spectrum is Cluster 4, which includes cities that have the lowest incomes per capita, the lowest income growth rates, and the high proportions of employment in manufacturing and retail. Cities in this cluster include those from the older Rust Belt manufacturing centers (e.g. Flint, MI; Anderson, IN; Elkhart, IN and Steubenville, OH), manufacturing centers in the Southeast (e.g. Hickory, NC; Morristown, TN and Dalton, GA), and interior California (e.g. Bakersfield, Modesto, Stockton, Merced and Fresno).

For the most part, cities in this group have been in a long, gradual decline and show few signs of changing course. These cities were, and continue to be, the “have-nots.”

On the other end of the spectrum is Cluster 3, with incomes well above the U.S. average and high proportions of employment in high human capital occupations like technology and education. Cities like San Jose, Santa Cruz and Boulder stand out in this cluster. Other cities in this group are retirement and tourism centers in Florida (Naples, Sarasota and Vero Beach) and cities like Hartford, Manchester and Napa that benefit from their close proximity to the larger economic powerhouses of New York, Boston and San Francisco, respectively.

The cities in Cluster 2, most of which are located in the so-called flyover states, are the places we hear less about. Cities like Des Moines, Milwaukee, Nashville or Indianapolis do not carry the cultural cache of New York, Los Angeles, Chicago or San Francisco. At the same time, they offer plenty of high-skilled jobs and rising incomes at a fraction of the cost of living. 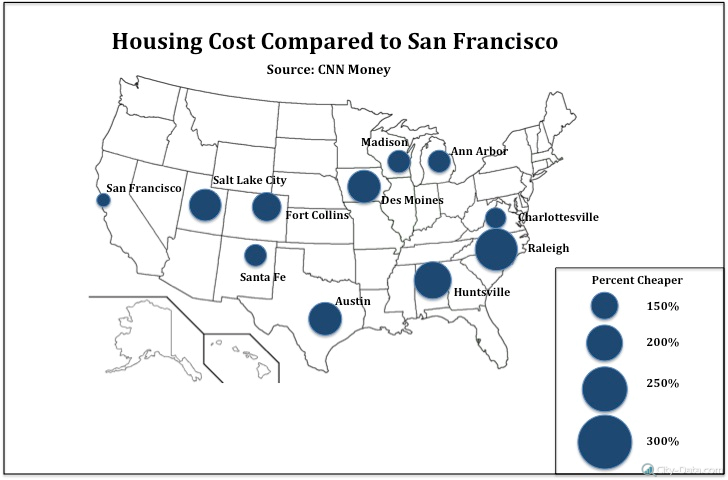 For example, over 14 percent of the workforce in Huntsville, Alabama is employed in professional, scientific, and technical services, which is right up there with employment levels in Silicon Valley. Average incomes are higher in Silicon Valley, but so is the cost of living. While the average income for San Jose was 20 percent lower in 2010 than in 2000, it grew 10 percent during the same period in Huntsville. Likewise, over 14 percent of Des Moines, Iowa is employed in the finance and insurance category, where the cost of living is 60 percent lower than in New York and average incomes have grown by 5 percent. 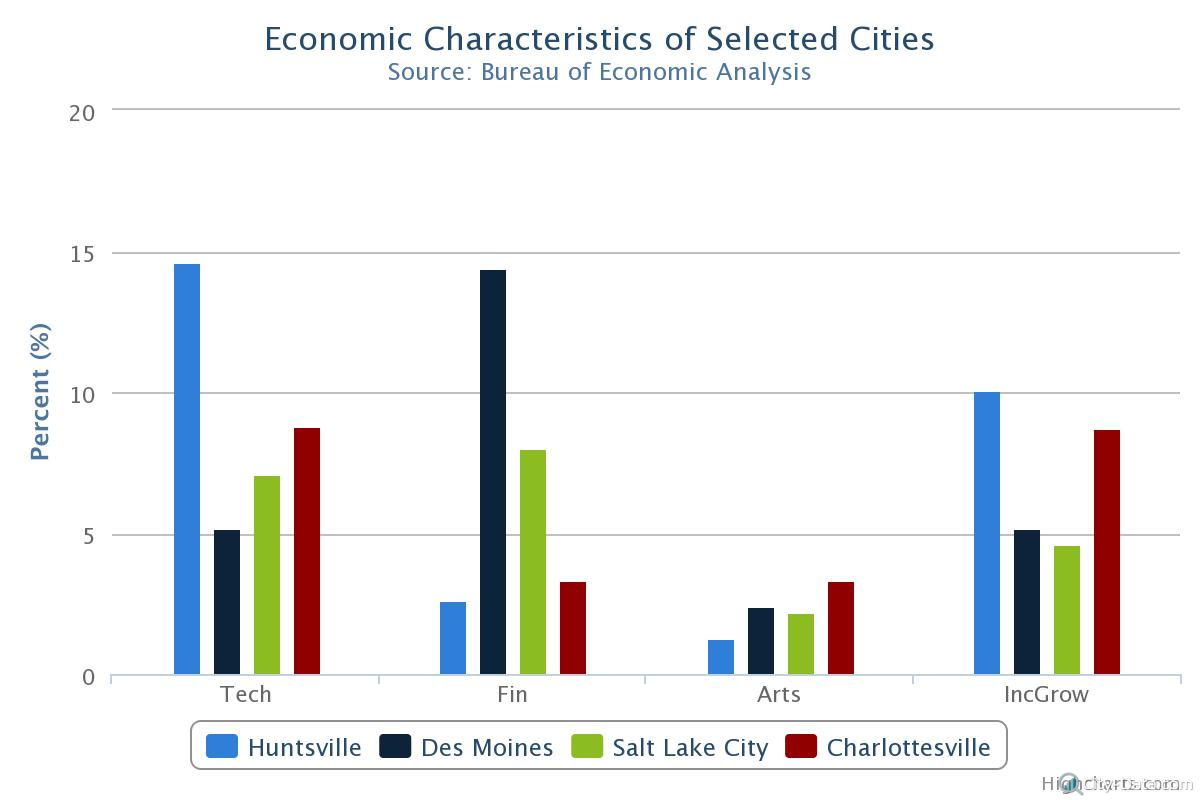 The point of this post is not to suggest that it is “better” to live in smaller, cheaper cities. There is something to be said for living “where the action is,” as most economic geography theory can attest. Being in the center of the tech industry in San Francisco or the financial industry in New York affords certain professional opportunities that Huntsville and Des Moines cannot. At the same time, the desire to save a larger portion of one’s income and to avoid the stress that is often associated with big city life should not be discounted.