Mormonism is the religious tradition of the Latter Day Saint movement of Restorationist Christianity. It was founded by Joseph Smith in the 1820s in New York. Mormonism today is the new, non-Protestant faith. After Smith’s death, most Mormons followed Brigham Young on his journey to the territory of Utah, calling themselves The Church of Jesus Christ of Latter-day Saints (LDS Church). The word Mormon comes from the Book of Mormon, one of their religious texts. 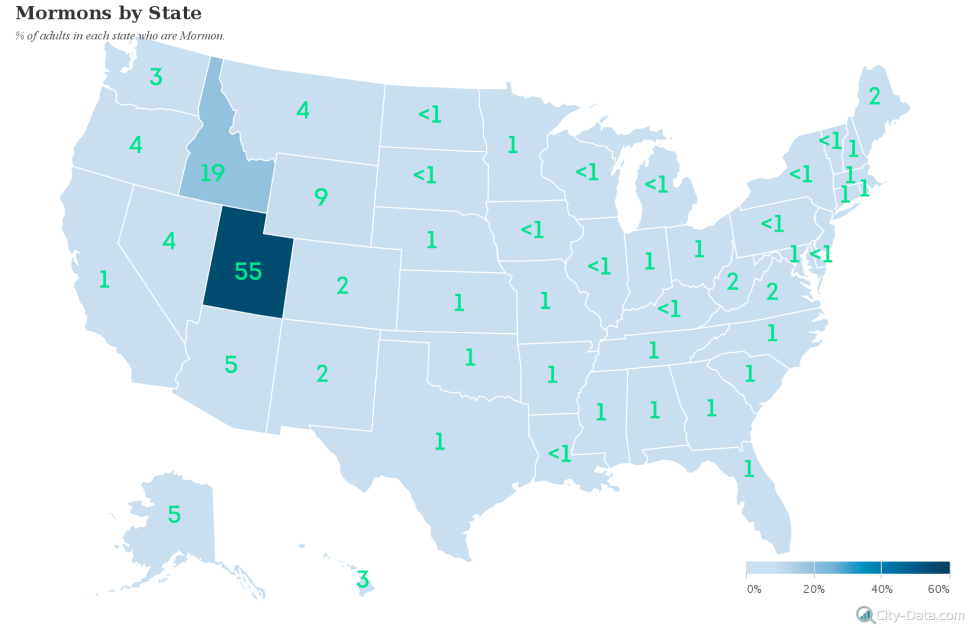 According to the 2012 Pew Research Center’s Forum on Religion & Public Life, the public attitude to Mormons appeared to be more positive than before. Most Americans (61 percent) described Mormonism as “very different” from their own religion. About 25 percent of people thought that Mormon faith had “a lot in common” with their beliefs. Also, 42 percent of White mainline Protestants saw a lot in common between Mormonism and their religion. In regards to White Catholics, 27 percent of them said their faith has a lot in common with Mormonism, while 58 percent said it was very different. About 53 percent of Americans thought that the Mormon faith is a Christian faith, while 30 percent thought it was not.

Compared to other religious groups, Mormons were more likely to have spouses who shared their faith: 82 percent of Mormons who were married or lived with a partner had a Mormon spouse or partner. Mormons tend to have more children than other groups: for example, Mormons aged 40-59 had an average of 3.4 children in the lifetime, more than any other religious group.

According to a 2011 Pew Research survey, 73 percent of Mormons said that having a successful marriage is “one of the most important things in life,” while 81 percent said the same about being a good parent.

2 thoughts on “A few numbers about Mormonism”