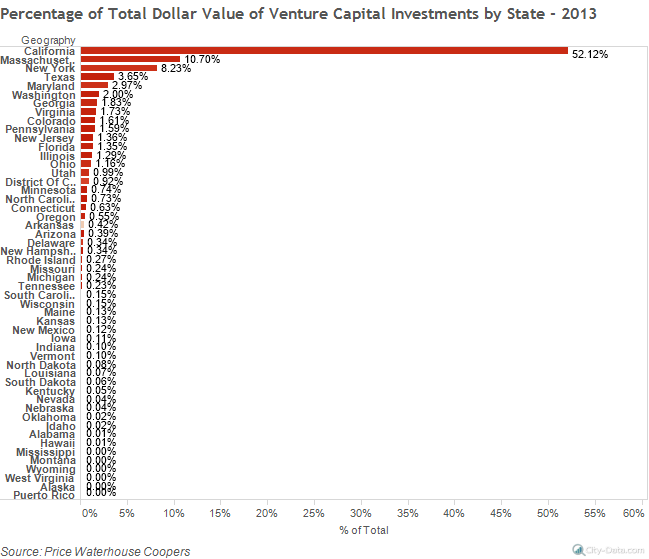 One might ask: Well, are the 2013 investment figures just an anomaly? Perhaps investors took a shine to companies located in California because of the recent boom in the technology industry.

The following animated GIF addresses this question by showing what the figures look like from 1995 to today. (As a note, the size of the state represents the percentage of total venture capital invested in businesses in that state in a given year. If the state shows up as larger in any given year, then businesses in that state received a disproportionate share of venture capital investment dollars in that year.)

Perhaps as no surprise, the dominance of venture capital investment in California is generally consistent across the years. The lowest take for California-based businesses occurred in 1998 at 37 percent, and the highest was 53 percent in 2012.

Why such a bias on behalf of venture capital investors for startups located in California?

As with most questions of this broad magnitude, the answer lies in the multidimensional detail. Here are four reasons.

First, the venture capital industry goes through various “hot” sectors, and in the past 20 years, the technology industry has been and continues to be a “hot” sector. With the likes of Google, Apple, Amazon and many other big technology companies headquartered in and around Silicon Valley, it comes as no surprise that venture capital investments would go to companies close by.

Third, industries cluster by their very nature. For instance, the investment banking industry is overly concentrated in very few cities, chief among them New York City, Chicago, Philadelphia and Omaha.

Clustering does not, of course, only occur for the various components of the financial industry. Clusters are also quite common in the industrial sector. For instance, the auto industry is heavily concentrated in the Michigan, Indiana and Ohio area; the tobacco industry has its headquarters in the mid-southern United States, including North Carolina and Virginia and the oil and gas industry is concentrated in Texas, North Dakota and certain areas in between the two.

So, the fact that the venture capital industry is heavily concentrated in California, and in particular Silicon Valley, is not all that surprising. Or is it? After all, the venture capital industry is after the most profitable investment opportunities and therefore should be very mobile. Can it really be that businesses located in California offer 52 percent of the most profitable opportunities?

Fourth, alongside clustering, the venture capital industry suffers from an oversized amount of “herd behavior.” Essentially, venture capital investors tend to follow one another into investments, rather than invest in competing companies.

It is this last point that leads some industry observers to wonder when the industry will broaden its horizons to other areas currently dominated by wealthy individual investors.

Interestingly, the answer largely depends on the above four answers to California’s dominance.

On the first, the venture capital industry may move away from California if investors start to sour on the California tech industry’s ability to produce rock star talent. Many locations are now trying to compete for the venture capital industry’s money through the technology startup channel. For instance, Skype, the king of voice-over-IP services, was not developed in Silicon Valley, but rather Estonia.

In addition, technology may lose favor with the venture capital industry as a whole. If one breaks up the data into sectors, the results look a little different. For instance, the following figure shows the venture capital investment flow in the consumer products industry. Although businesses in California have a slight advantage in 2013, that advantage is not as large, especially if one controls for population.

The same general story holds for most other sectors. 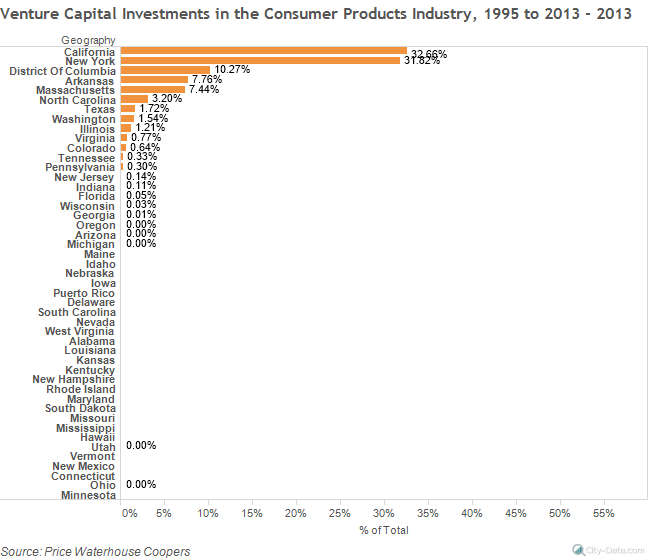 Another trigger for venture capital investors to widen their horizon could be the increasing desire on behalf of university administrators to get entrepreneurial talent as part of their faculty, rather than just teachers or researchers. California’s first-mover advantage won’t last forever.

Lastly, on clustering and herd behavior, the venture capital industry will eventually reach a tipping point where either entrepreneurs or investors want to live somewhere else for various reasons, such as tax policy, housing, demographics or any number of things.

The question now is how long can this go on? When will venture capital investors move away from Silicon Valley towards (perhaps) greener pastures in other highly entrepreneurial areas, such as Utah and some of the southern states? We all know it will eventually happen — the only question is when and what the trigger will be.

One thought on “Venture Capital: Where Will the Money Move to Next and Where Has It Been?”