A white paper released by the Ewing Marion Kauffman Foundation finds that Kansas City and other areas viewed as “new” startup hubs have actually been fostering a culture of entrepreneurship for some time. Many of these cities have a history of strong technology sectors or have experienced strong growth among technology startups over the past two decades.

Recent research by Ian Hathaway examined the geography of startup hubs in the high-tech and ICT sectors in the United States. Hathaway’s paper outlined the dynamics of the development and decline of startup hubs as measured by startup density within a discrete locale for 1990 and 2010. One of the findings indicates that between 1990 and 2010 the following metropolitan areas experienced the greatest gains in startup density:

The phenomenon of the startup hub is relatively well-documented; however, what the demographic profile of the areas looks like is less clear. For example, more than 18 percent of Silicon Valley residents live in poverty, despite the region’s reputation for tech-fueled prosperity, according to a new report. The Stanford University Center on Poverty and Inequality teamed up with the Public Policy Institute of California for the analysis, which redefines the way poverty is measured in the state. Their goal is a better accounting of California’s notoriously high cost of living, large undocumented immigrant population and under-reported reliance on social safety net programs. The authors of the study found several population groups and geographic areas — Silicon Valley included — with higher rates of poverty than previously calculated by demographers from the U.S. Census Bureau. The findings have important public policy implications, given a recent statewide focus on wages and housing costs.

The two figures presented below reveal a somewhat surprising trend: with a few exceptions, startup hubs that have seen a larger increase in the median household income from 2001 to 2011 also seem to have a higher number of residents living in poverty. For example, although Denver, Colorado, has witnessed a steady increase in the median household income, this city also has a higher poverty rate than numerous other startup hubs. A logical question that follows from this examination of available demographic data is the question of what variables could be at play in startup hubs that account for the trends depicted in Figures 1 and 2. A careful examination of the data might yield answers to this question.

From a broad perspective, the simplest explanation for the trends illustrated below would seem to be that the socio-economic structure of these startup hubs are built in such a way that capital and wealth is disproportionately distributed among the population. For example, it is plausible – in principle, at least – that the relatively few individuals with a college degree in a city would have most of the economic wealth, in contrast to those with nothing more than a high school education. 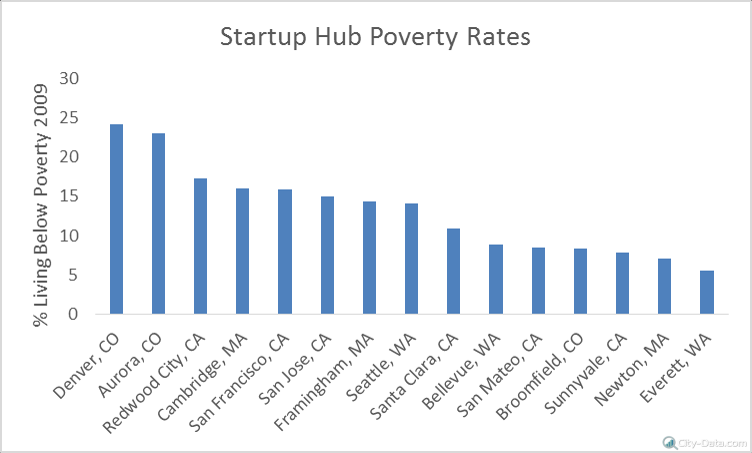 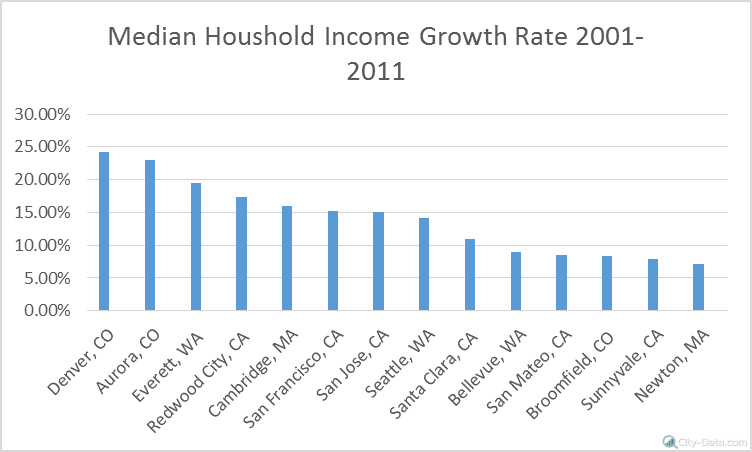 Figure 3, below, presents data on the education profile of individuals living in startup hubs. 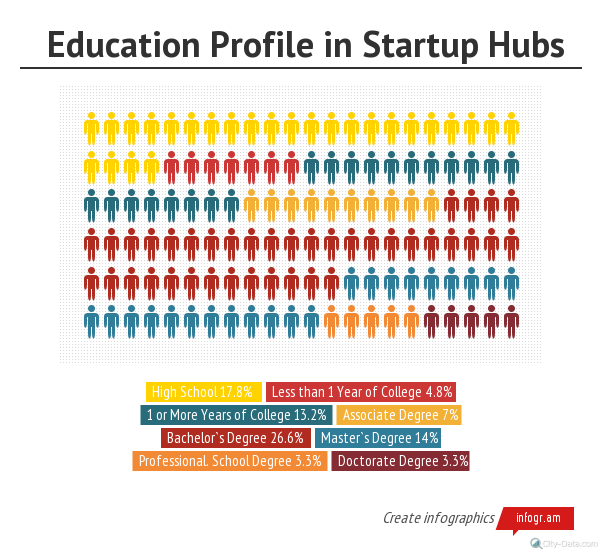 A cursory inspection of this figure reveals a noteworthy observation; the education profile of startup hubs is dominated by two primary groups: those with only a high school education (17.8 percent) and those who have a bachelor’s degree (26.6 percent). This suggests an interesting hypothesis that could possibly explain why startup hubs with a higher median income also have higher poverty levels: the more disproportionate the education levels of the inhabitants of a startup hub (or, for that matter, any given city), the greater the poverty level is. Why might this be the case?  Firstly, if a city consists primarily of college graduates and those with nothing more than a high school education, then the wealth of the city will, in general, be concentrated towards those with a college degree. This is not a radical thesis; it has long been known that higher education is strongly correlated with a greater monetary income (see, e.g., Educational Attainment in the United States: 2003). The proposition that the wealth of a given region will generally concentrate towards college graduates (in contrast to those who have only completed high school) is a logical extension of the correlation between higher education and income levels.

Thus, it is possible (in theory) that, for example, the educated profile of Denver, Colorado, is more disproportionate than that of Everett, Washington. This, in turn, would lead to a greater poverty level in Denver than in Everett. Evidence may be cited here to support the notion that disproportionate education levels can often correlate with a higher poverty level. Consider, for example, Los Alamos, New Mexico. The population of Los Alamos is highly educated, and thus, the education profile of this city is not very disproportionate. Interestingly, Los Alamos has a very low poverty level (5.1 percent). What makes this more striking is the fact that the rest of the state has a much higher poverty level of 23.5 percent. In obvious contrast, Socorro, New Mexico, has a very high poverty rate (40.2 percent), despite being home to an institution of higher learning.