After going through decades of decline and outmigration, city living has come back into vogue in the United States. In a reversal of post-war trends, more and more people, especially young professionals, are opting for close-in neighborhoods rather than the spacious suburbs.

For many urban mayors, this is a welcome change and a potential source of much-needed tax revenue. To improve their attractiveness even further in the eyes of the young, talented and educated potential movers, many cities have made substantial investments in “quality of life” projects.

In general, city planners and urban scholars measure quality of life according to urban amenities such as green space, cafes, nightlife and cultural offerings like art galleries and theatres. Additionally, quality of life refers to questions of general welfare, such as the quality of the local educational system, the effectiveness of local governance and safety.

Using a wide variety of publicly available data, there are now a number of studies and indexes that compare quality of life scores across cities in America. Many indexes combine some measure of natural amenities with various metrics of nightlife and entertainment establishments. Cities in the West tend to dominate “quality of life” rankings of this sort because of their temperate, sunny climates, easy access to a variety of natural parks and recreational areas and amount of urban entertainment on offer.

By contrast, many cities in the Midwest have harsher climates, fewer nearby natural attractions and fewer entertainment establishments, and therefore­­ score much lower in the rankings. It is worth noting that natural amenity indexes privilege mountainous landscapes, which places most of the Midwest at a disadvantage. 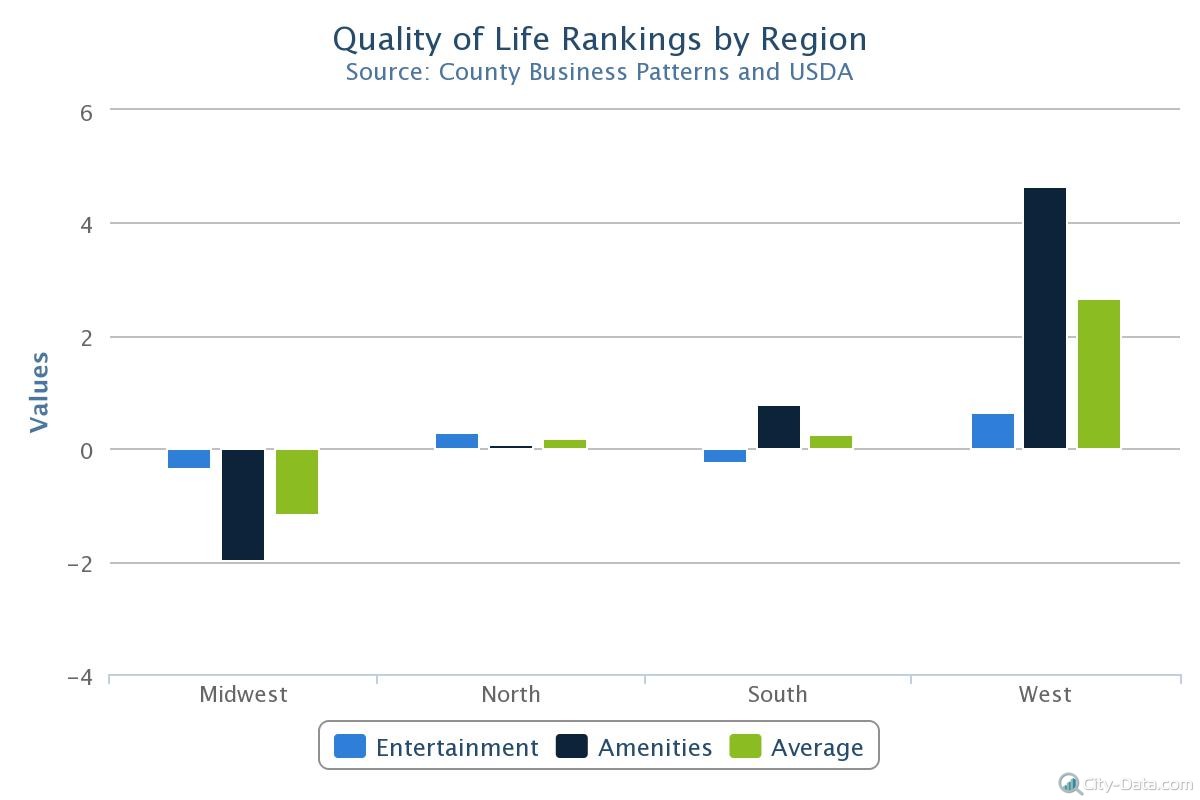 While entertainment, climate and recreation are no doubt important considerations for many people, there are many other location-related factors that influence quality of life. Social capital, for example, is rarely factored into the various indexes that rank and rate cities according to their quality of life.

Generally, people build social capital through their participation in organizations and institutions. Examples may include attending religious services, volunteering at a special interest organization, joining a sports league or any other activity in which people can build a common bond or share a common goal. Social capital, therefore, is not necessarily a reflection of “quality of life” as many city planners understand the concept. While a community may have a high number of nice cafes and art galleries, they do not necessarily improve an individual’s quality of life if he or she holds no personal or emotional attachment to them.

One way to examine social capital is to devise an index based on the types of business in a city, as sociologists at Penn State University have done. The index is a per capita count of social establishments, such as bowling alleys, professional and labor organizations, sports clubs and religious organizations. These are exactly the types of establishments highlighted by the famous sociologist Robert Putnam, whose seminal book “Bowling Alone” is considered a classic text on the subject of social capital.

According this index, the places with the highest social capital scores are mostly Midwestern cities where “quality of life” scores based on nightlife and natural amenities are lowest. These cities mostly have small, relatively homogenous populations. By contrast, many of the smaller, ethnically diverse cities in Texas, Arizona and California, as well as many cities in the smaller cities in the Southeast are at the bottom of the list in terms of social capital. Joining them near the bottom are large auto-dependent cities like Phoenix, Las Vegas, Los Angeles and Houston. 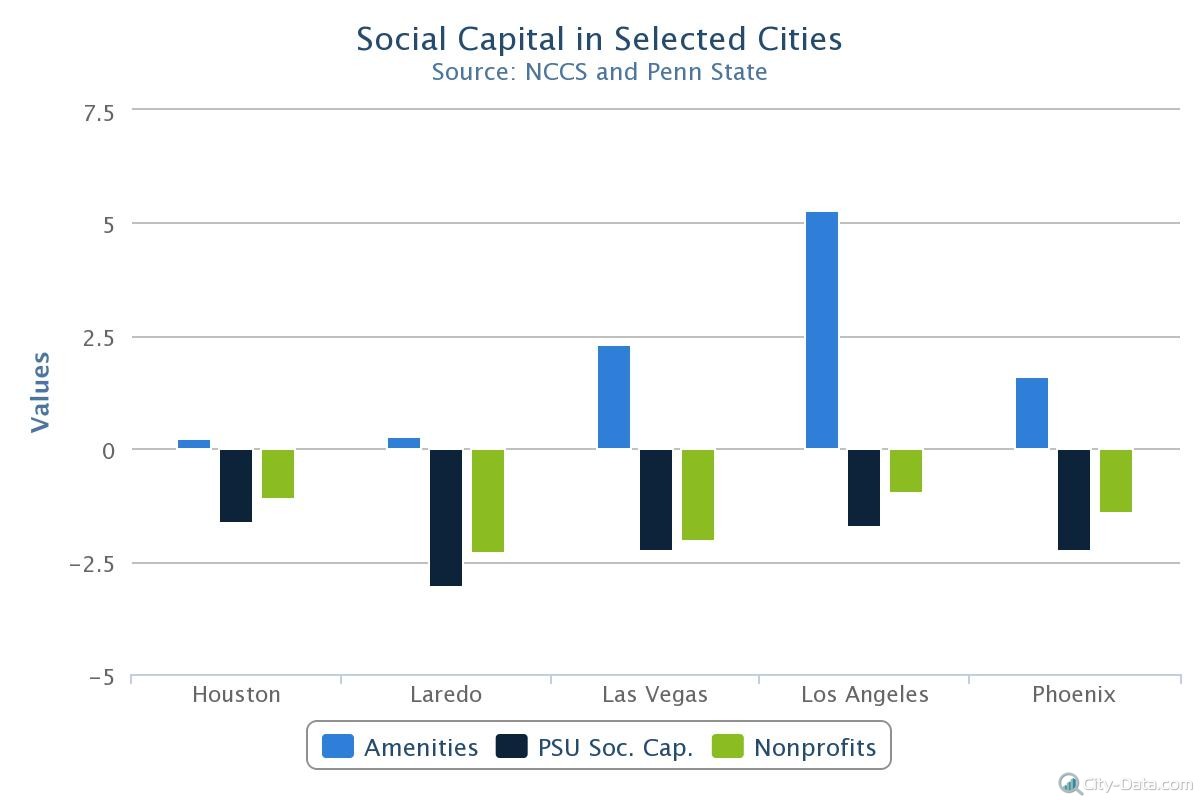 In addition to looking at businesses that may foster social capital, it is also possible to consider nonprofit organizations that offer public services and opportunities to volunteer or share common experiences with others. Using the National Center for Charitable Statistics database, it is apparent that nonprofits tend to cluster in state capitals such as Des Moines, Iowa; Jackson, Mississippi; Trenton, New Jersey and Sacramento, California, among others. College towns such as Ames, Iowa; Corvallis, Oregon and State College, Pennsylvania also have high concentrations of nonprofits. At the opposite end of the spectrum are many Southeastern cities, especially those in Texas. Once again, low-density, auto-dependent cities like Las Vegas, Orlando and Los Angeles are also near the bottom of the list. 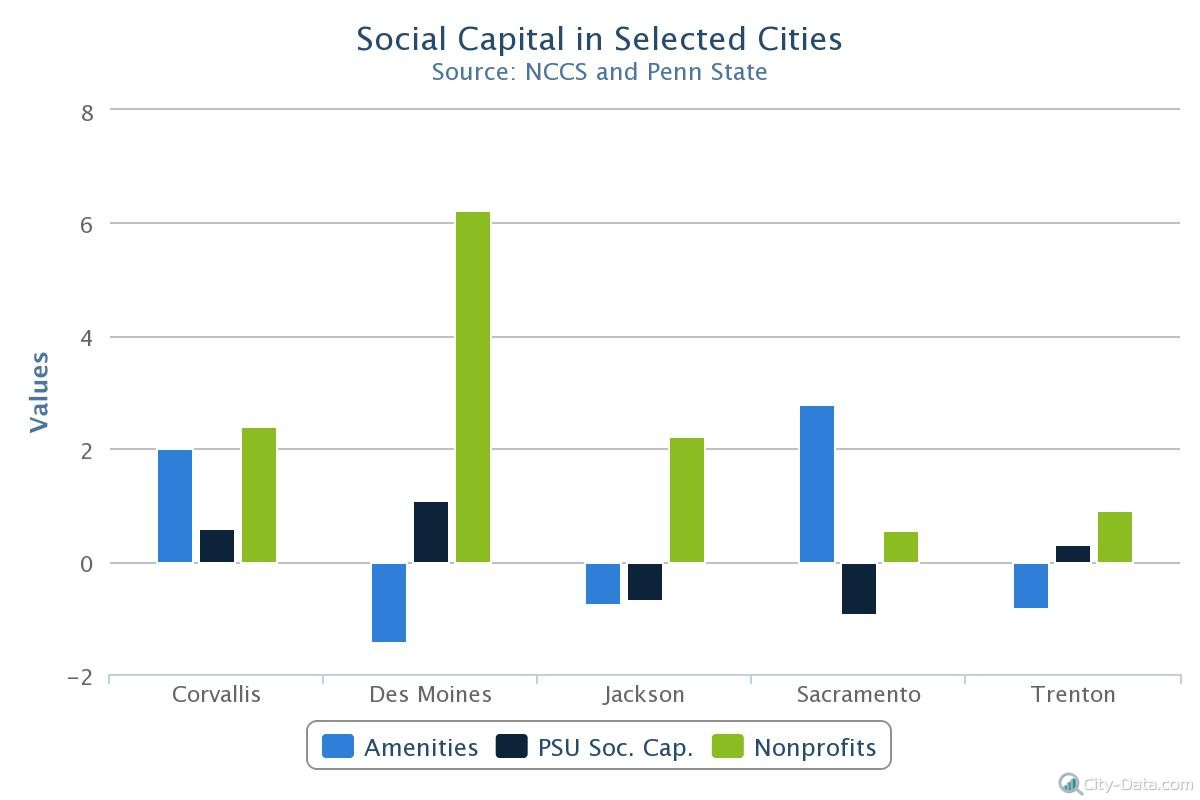 For those interested in using place rankings to inform their relocation decisions, this comparison of quality of life and social capital characteristics offers a few useful insights. While small- and medium-sized Midwestern cities generally do not have high entertainment or amenity rankings, they outperform most other places in terms of social capital. Smaller cities in Iowa, Nebraska, Illinois and Indiana consistently rank high on social capital lists whether one considers nonprofit institutions or registered businesses. The opposite is true of large, suburban-oriented cities in the Sunbelt states of California, Nevada, Arizona, Texas and Florida. In addition, small- and medium-sized cities in the Pacific Northwest and the Intermountain West offer a good balance between social capital and quality of life concerns. These cities have both the physical and social infrastructure to help people enjoy their community while also building the sort of emotional attachment required for long-term civic health.