We live in an age where technology drives innovation in an unprecedented manner. Whether we are talking about gadgets we cannot do without (smartphones, tablets, and game consoles) or specialized software (Indesign, Photoshop or CAD) or even medical innovations (nanotechnology, genetic research and prosthetics), technology seems to always function as a common thread between any of these conversations. The growing availability and access to technologies is the reason why gadgets, machines, and robots have become omnipresent tools that make our lives easier and our working hours more productive. A tool, however, does not work on its own. In fact, it is how we use the tools what in the end generates a crucial difference. Technology, when in creative hands, can be conducive to wonderful innovations, from solar powered cars to video conference calls at the touch of a button. Where does this creative talent come from? Is it something that we can take for granted or is it perhaps more of a black swan event within a workforce that actually lacks the ability to use the many tools at its disposal?

My purpose is to provide a first answer to these questions, by arguing that such creative talent exists, but is neither accidental nor plentiful. Creative talent, it may be safe to say, is the working force behind the innovations of our time, and it is essential for our economic future. Yet, creative talent is scarce and countries are engaged in a fierce battle to attract it, to nurture it, and to harvest its profitable produce. The question here is, therefore, how the U.S. fares in this competition for talent, and what the role of newcomers is. In terms of the immigrant share of the total population, the U.S. has seen a steady increase. Now, how good is this for the country? 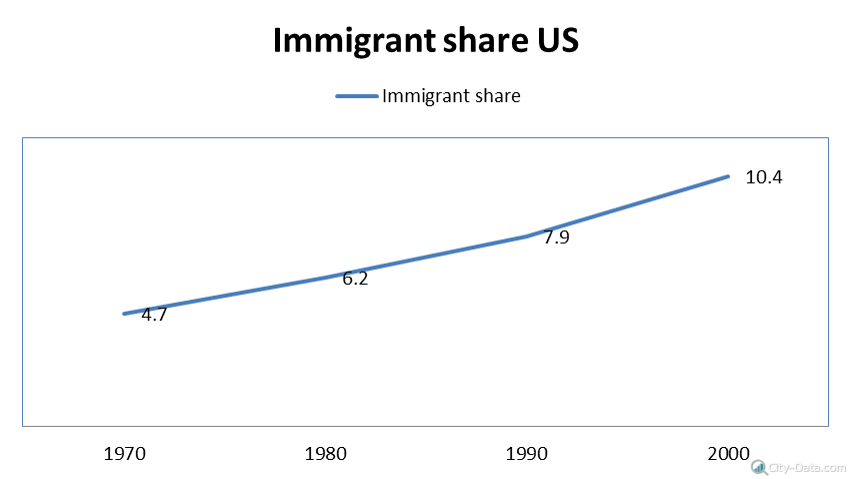 It is true that when thinking of things such as technology, innovation, creativity and scientific research, we seldom associate them with immigrants. There is a view, in fact, a prejudice of sorts that tell us that immigration flows are characterized by newcomers, who are mainly low-skilled. The renowned Creative Class sociologist Richard Florida, and he is not alone in doing so, argues that such view is plain wrong. He would ask from us to just take a look at the numbers: The percentage of immigrants without primary education is less than 7 percent (Florida, 2004, p 83). Furthermore, the Unites States is attracting the lion’s share of educated immigrants: nearly 75 percent of its Indian immigrants have a bachelor’s degree. It’s even more staggering to see that of from all Mexicans with a college degree, 12 percent live in the U.S., and that same figure goes up to 75 percent when it comes to Jamaicans.

So, why is this especially important? Florida’s answer is simple:

“Regional economic growth is powered by creative people, who prefer places that are diverse, tolerant and open to new ideas. Diversity increases the odds that a place will attract different types of creative people with different skill sets and ideas. Places with diverse mixes of creative people are more likely to generate new combinations. Furthermore, diversity and concentration work together to speed the flow of knowledge. Greater and more diverse concentrations of creative capital in turn lead to higher rates of innovation, high-technology business formation, job generation and economic growth” (Florida, 2004, p 249).

Immigrants, to be sure, are a marker of diversity. Skilled immigrants would, in addition, bring together a different set of skills and experience, product of diverse backgrounds, which would help spark creativity. If Florida is correct, then we would expect, therefore, that the results of such steady immigrant flows be equally visible. For instance, we would expect for immigrants to be behind successful entrepreneurship within the creative industries. Companies such as Yahoo and Hotmail have immigrant founders, yet single cases do not make a trend. 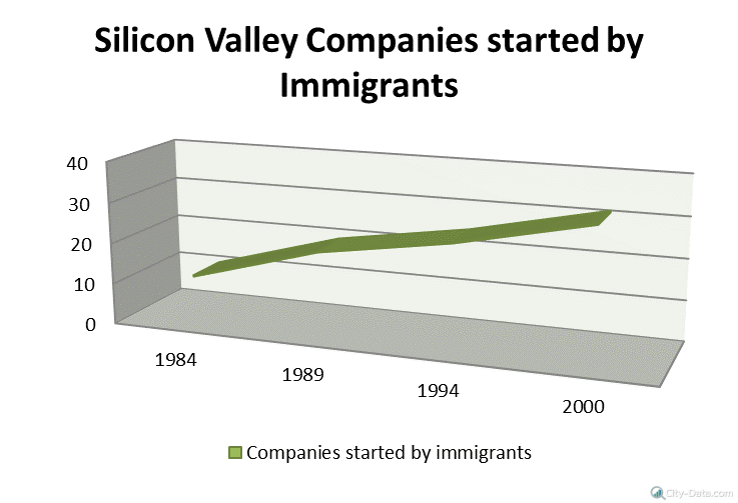 However, I began saying that the competition for the best talent has intensified. If we take a minute to think about the implications of the entrepreneurial spirit of skilled immigrants alone, it is not surprising that countries would be eager to attract the best talent out there. In a globalized world, moreover, this may be easier than ever before. The question here would be firstly: how is the U.S. doing? Is worldwide talent finding safe abode within U.S. shores?

A good way to begin answering these questions is by taking a look at the growth of scientific publications. Scientific texts are a clear sign of advanced work that can be conducive to innovation. 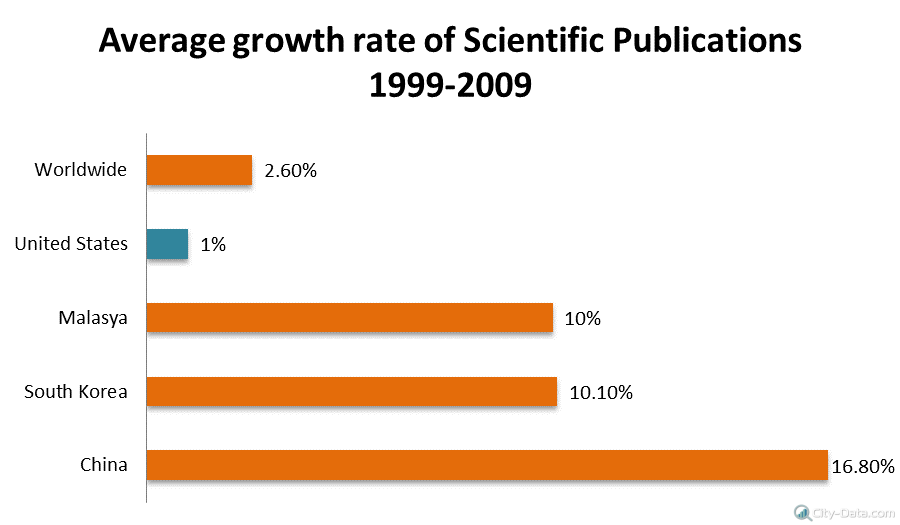 As we can see, the U.S. is lagging behind when it comes to scientific publications. This indeed could be a worrying trend, in particular, because the U.S. is not only lagging behind up and coming countries like China or South Korea, but from the worldwide average. Still, we must look further than to scientists alone, in order to understand how the U.S. is doing, when it comes to attracting creative talent. To do so I follow the notion of what Florida refers to as the Creative Class. His definition stays in line with figures from the International Labor Statistics (ILO) and the US Bureau of Labor Statistics. His Creative Class includes scientists, engineers, artists, cultural creatives (marketing and communications professionals, designers, etc.), managers and technicians (ICT related technicians in particular) (Florida, 2007, p 272). Under this broader definition, we are ready to ask, thus, how big is the creative class in the U.S. and how does it compare with other countries? 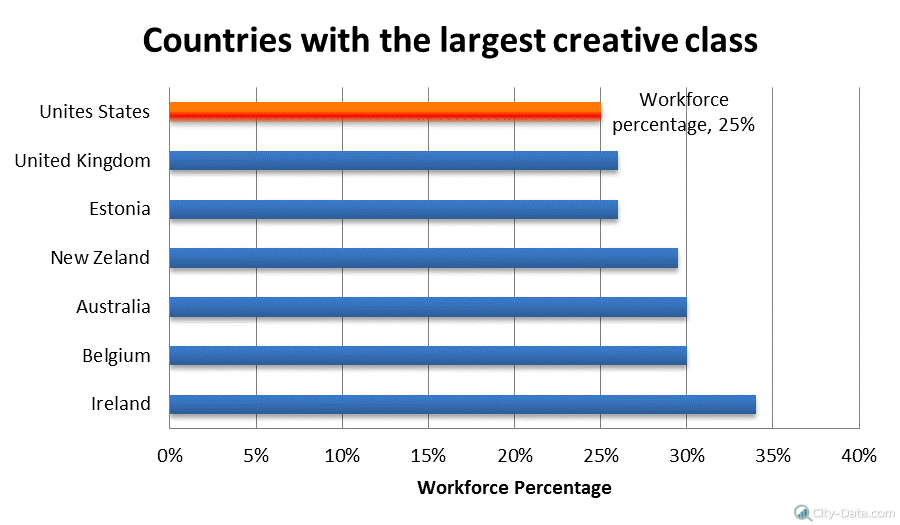 The U.S. has one of the largest creative workforces worldwide, but this is certainly not enough to ensure the future of an innovation driven economy. Let’s take a look at the growth trend of the creative class. 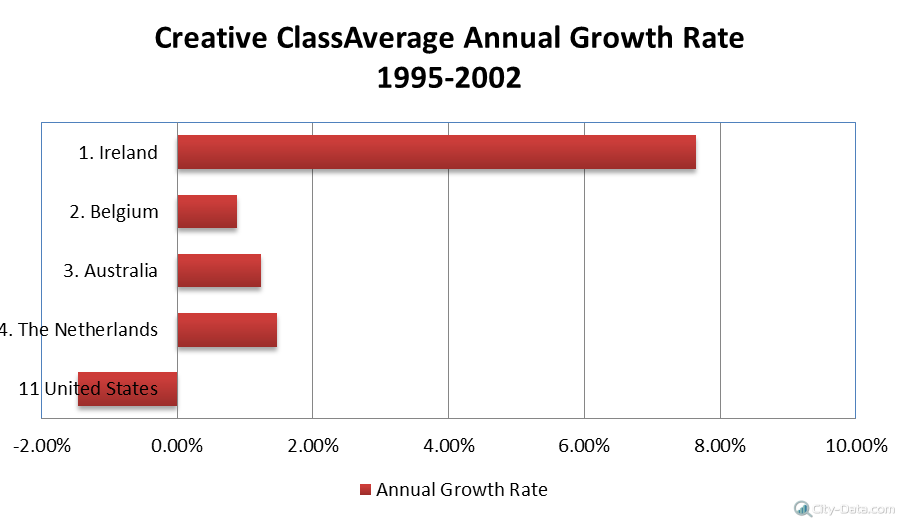 Here the issue indeed becomes worrisome. Ireland, Belgium and Australia, who are already leaders in the size of their Creative Class, are also growing, while the U.S. would be taking backward steps. The reasons behind this decline are various: immigration restrictions, lack of diversity, lack of enough creative talent, and other crucial factors. The issue is therefore how to enlarge the creative economy, in order to take advantage of its innovative and entrepreneurial spirit, when, for instance, sectors like the manufacturing industry seem to be in decline. The role that skilled immigrants can play in this respect seems enormous and an opportunity that the U.S. cannot afford to miss.

Philosopher and Economist focused on the interdisciplinary study of economics, and on the role that media studies can play in practical business areas related to marketing strategy, management and organizational studies, and project management.

He has worked both as a Scholar in the Netherlands and Colombia, as well as a Marketing Strategist. Currently, he is dedicated to understanding the dynamics of innovation and creativity and helps companies develop Experiential Marketing Strategies, for their online advertising efforts.

Writings related to his business approach can be found at: thefactish.blogspot.nl/.

Some of his academic articles can be found at The Erasmus Journal of Philosophy and Economics: http://ejpe.org/

His education includes a:

2 thoughts on “Innovation, Creativity and Why the U.S. Needs to Become More Attractive for Immigrants”