A few weeks ago, my wife developed a fever. Many people had colds and the flu at the time, so we were not too concerned. As it was a Friday afternoon, the best treatment seemed to be a quiet weekend of recuperation. She took the normal things: Vitamin C and aspirin. The fever waxed and waned over the course of the weekend, and I persuaded her to take Monday off work. She went to see her doctor, who confirmed that she had a bad case of the flu. The doctor thought that she was also a little anemic, so took blood samples which were sent off for testing.

By Monday evening, my wife was feeling pretty decent. The next morning she was feeling fine, so she went off to work. However, at some stage during the day the fever returned, much worse than before. She left work early. While she was on her way home, the doctor called to say that the results of the tests had come back and her red blood cell count was dangerously low. She was to be admitted to hospital immediately.

Sometime later that night, after a barrage of further tests, the hospital physician announced that she had malaria.

We live in South Africa, a few hundred kilometers from the nearest malaria area. However, two months earlier, my wife had been on a short trip to Uganda. The strain of malaria which she had contracted is not found in South Africa but is present in Uganda. Evidently, she picked it up during her trip (despite taking potent prophylactics), and it had remained dormant in her system until recently.

The Most Dangerous Animal in Africa

The hippopotamus, lion, crocodile, buffalo, elephant, rhinoceros, great white shark and mosquito are the most dangerous animals in Africa. It may seem odd that the tiny mosquito is included in this list of animals, most of which are roughly a billion times bigger [1]. Yet the tiny mosquito, with a mass of only a millionth of a kilogram, is probably the most dangerous of them all — it is responsible for more deaths in Africa than any other animal. Mosquitoes spread malaria, elephantiasis, yellow fever, dengue fever, West Nile virus and a few forms of encephalitis. Of these, malaria causes around 1 million deaths annually in sub-Saharan Africa. Most of the fatalities are children under the age of five.

Mosquitoes of the genus Anopheles carry the Plasmodium protozoan [2], the parasite that causes malaria. They transmit the parasite between vertebrate hosts. Of the more than 200 species within the Plasmodium genus, only a fraction infect humans. Other mammals, birds and reptiles are also affected by other species in the genus.

Malaria infection is triggered by a bite from a female Anopheles mosquito. The Plasmodium parasite is transmitted from the mosquito’s saliva into the bloodstream, where it travels to the liver. Within the cells of the liver, the parasite matures and then reproduces rapidly. The infected person does not experience any symptoms during this stage, which can last from a week to a month. This latent period ends when the infected liver cells burst, spilling the parasite into the bloodstream where it infects red blood cells. It reproduces further within the red blood cells, generating waves of progressively stronger infection. The resulting symptoms include fever and headaches, which typically recur at intervals of a few hours. If infected red blood cells break through the blood-brain barrier they cause cerebral malaria, which is very serious and can cause brain damage. In severe cases, a malaria infection can lead to coma and death.

Two species, Plasmodium vivax and Plasmodium ovale, can remain inactive in the liver for months or years, leading to recurrent malaria relapses.

Malaria occurs in the tropics and sub-tropics — specifically Central and South America, most of Africa and some of Asia. The map below shows the number of malaria cases per million population based on data from the World Health Organization (WHO) [3]. Incomplete reporting and changes in health care practices in many countries make it difficult to accurately assess the number of cases per year, so some of the statistics are only indicative of the true number. Although nearly 100 countries reported malaria infections, 80 percent of all cases occur in only 17 countries: Uganda, Ghana, Zaire, Burkina Faso, Kenya, Zambia, Pakistan, Ethiopia, Malawi, Niger, Tanzania, Mali, Ivory Coast, Burundi, Sudan, Nigeria and Indonesia. 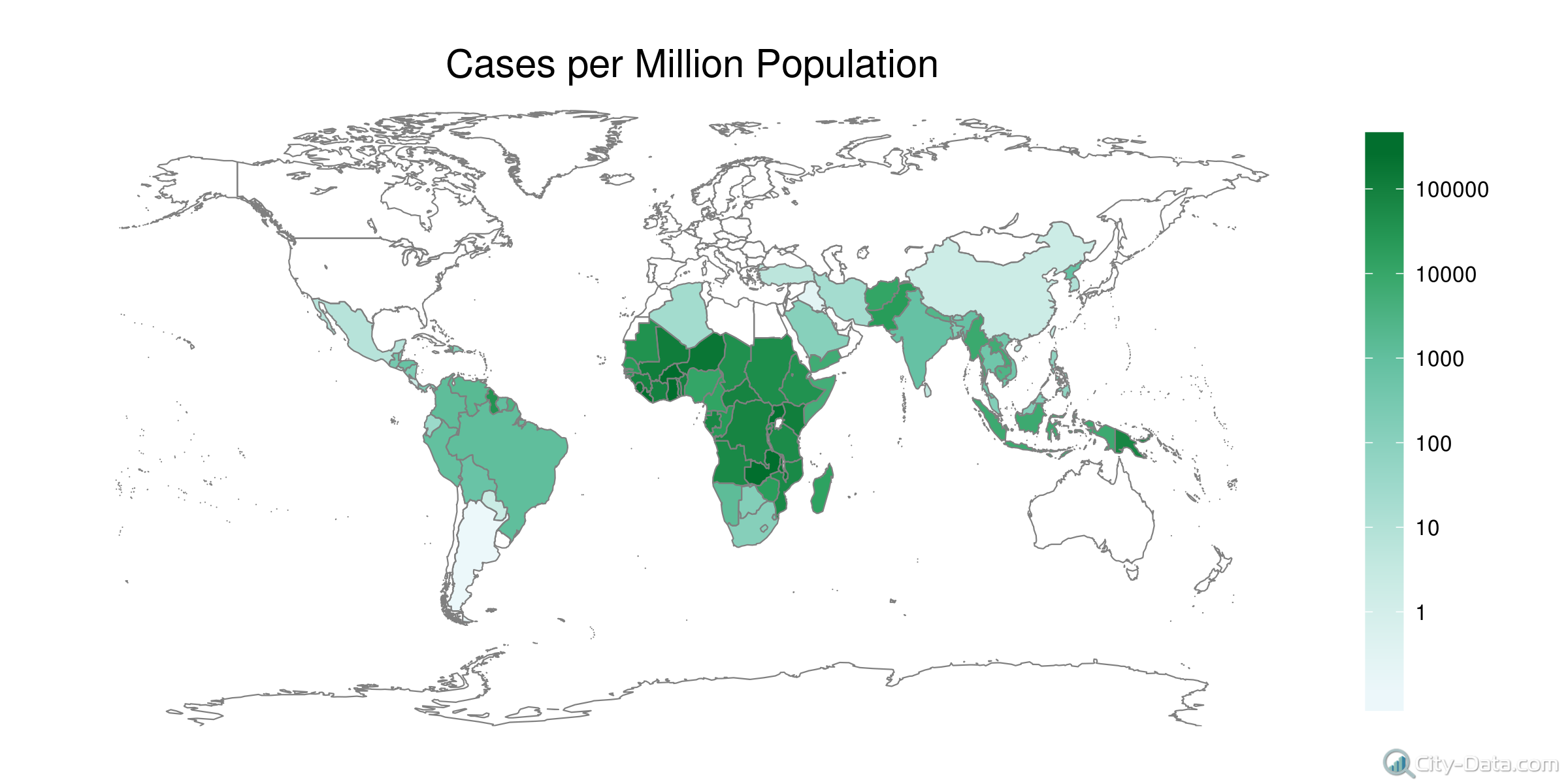 The majority of malaria infections do not result in death. However, in 2012, there were roughly 600,000 fatalities, which equates to a little more than one death per minute. The map below shows the number of deaths attributed to malaria per million population. Almost 40 percent of malaria deaths occur in the Democratic Republic of the Congo, Uganda and Burkina Faso. 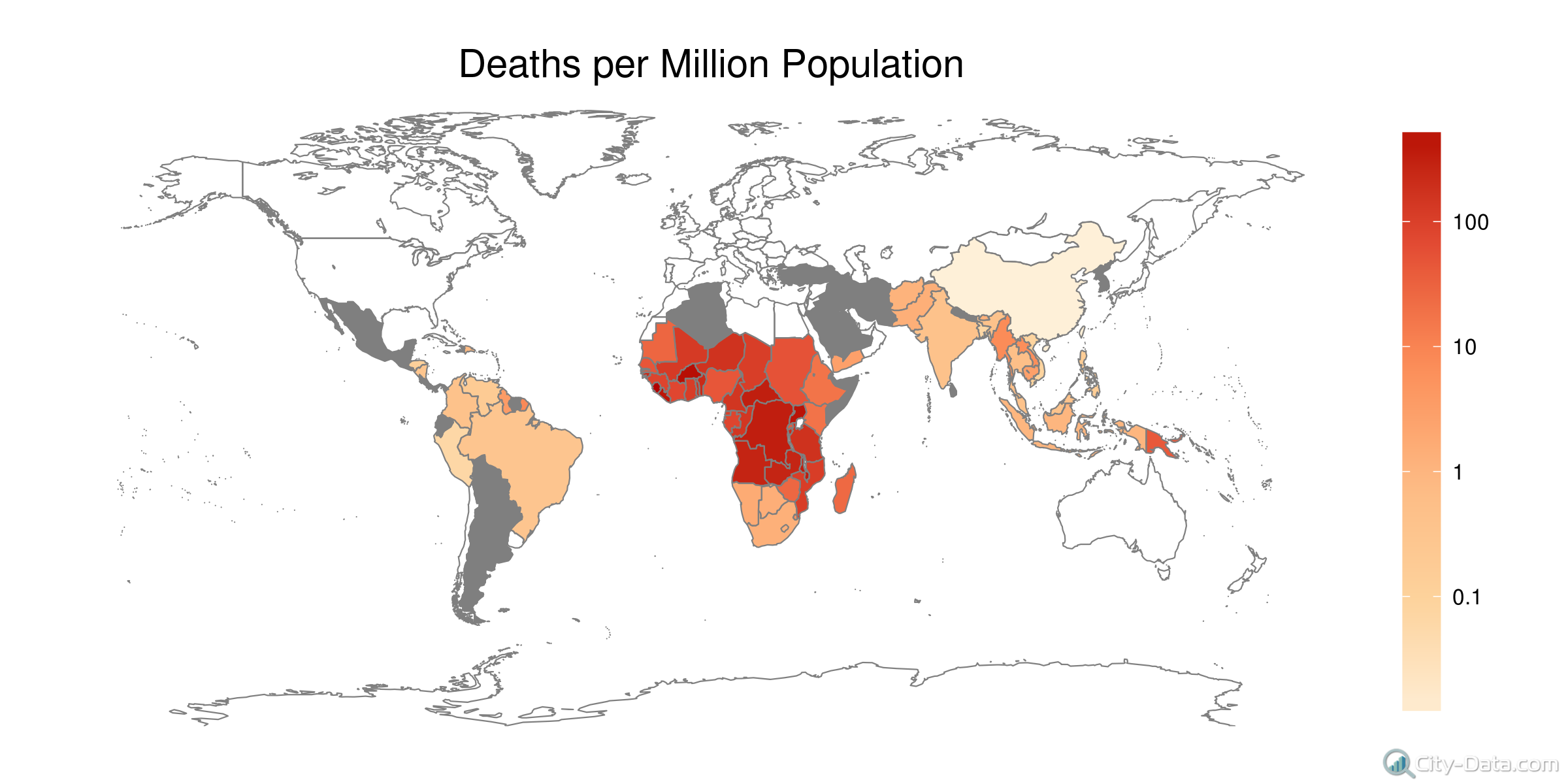 Like most infectious diseases, the most effective course of action is prevention rather than cure. There are currently no vaccines for malaria. Travelers to a malaria area can take a prophylactic. However, these preventative drugs are not without their problems: they are not always effective, can mask the symptoms of malaria and sometimes produce extremely unpleasant side effects. In fact, some people claim that the side effects of prophylactics are worse than the disease itself. If, however, you ask somebody who has had cerebral malaria, you will undoubtedly hear a very different opinion!

Malaria is eminently treatable. However, it is critical that the victim is treated as soon as possible. In the majority of cases in Africa, this is part of the problem. Many victims live in remote areas, far from medical care. In some places, effective treatment is completely unavailable. The symptoms of malaria are also easily confused with other diseases, leading to misdiagnosis and delayed treatment.

In the event of a malaria diagnosis, the choice of medication depends on the type and severity of infection, where it was contracted (determining possible drug resistance) and whether or not a prophylactic was taken.

Artemisinin-based combination therapies (ACTs) [4] are a relatively new form of antimalarial drug consisting of a cocktail of compounds designed to reduce resistance to any one particular component. The central ingredient in ACTs is Artemisinin, which is obtained from the wormwood plant. ACT is the best treatment for malaria caused by Plasmodium falciparum, the most deadly species infecting humans. In the absence of complications, ACTs are around 90% effective and generally cure patients within a few days.

The data in the maps above provide a static view of the global distribution of malaria cases and deaths in 2012. However, to put these figures into perspective, it is useful to consider how they have evolved over time. To what extent have the measures put in place by the WHO, various governments and other bodies been successful in containing the disease?

The number of cases of malaria is plotted below as a function of time for a selection of countries. Note that the data have been plotted on a logarithmic scale. It is apparent that there is no global trend. In some countries, there is a consistent decrease in the incidence of malaria. In others, the infection rate has remained roughly constant for nearly two decades, while in a few malaria is becoming more prevalent. 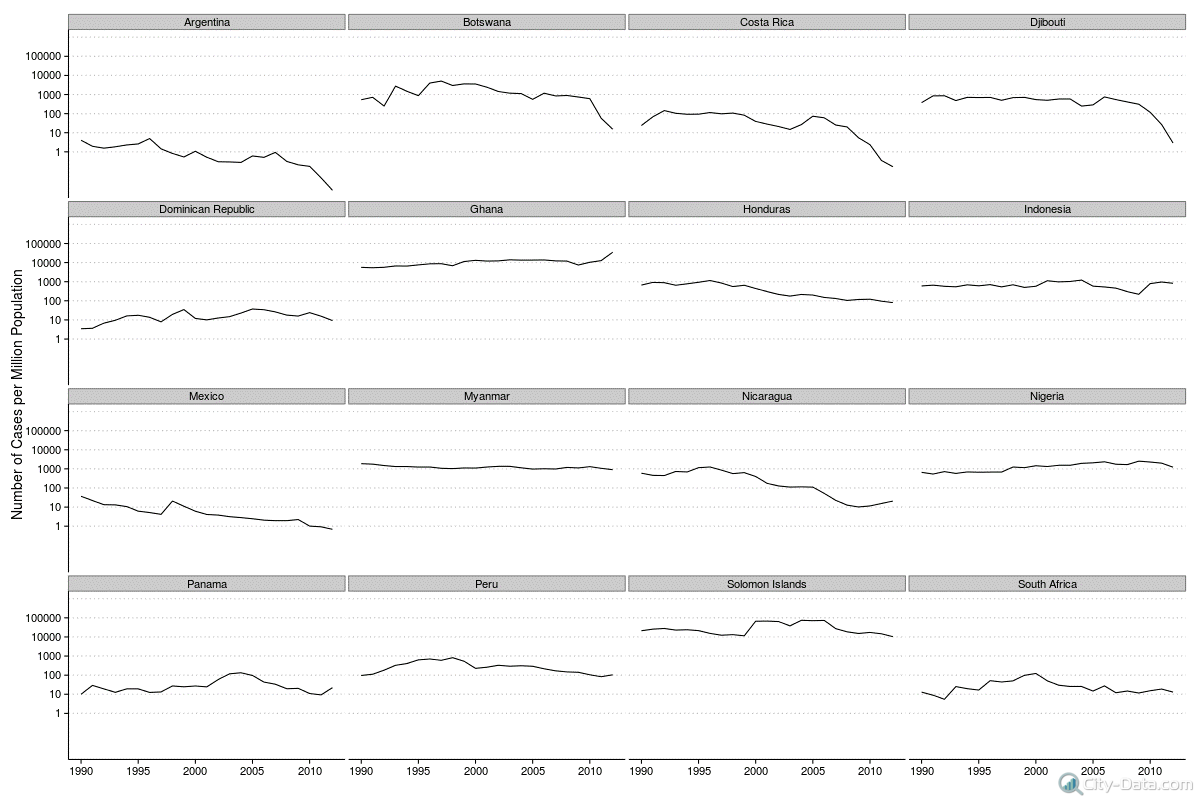 To extract general patterns from the data I applied a multivariate technique called Principal Component Analysis (PCA). PCA looks at the data for all of the countries together and finds the dominant pattern that is common to most of them. This pattern is known as PC1. PC1 is then removed from the data and the dominant pattern in the remaining data is found. This becomes PC2. The process proceeds recursively until all of the variations in the data have been allocated to one of these patterns.

The plot below shows the first three patterns (PC1, PC2 and PC3) which are responsible for most of the variability in the data. PC1 is roughly constant until the late 1990s and then increases with time; PC2 is peaked around the year 2000; PC3 decreases until the late 1990s before rising sharply and the remaining roughly constant. We should be able to find signs of one or more of these patterns in the data for each country. 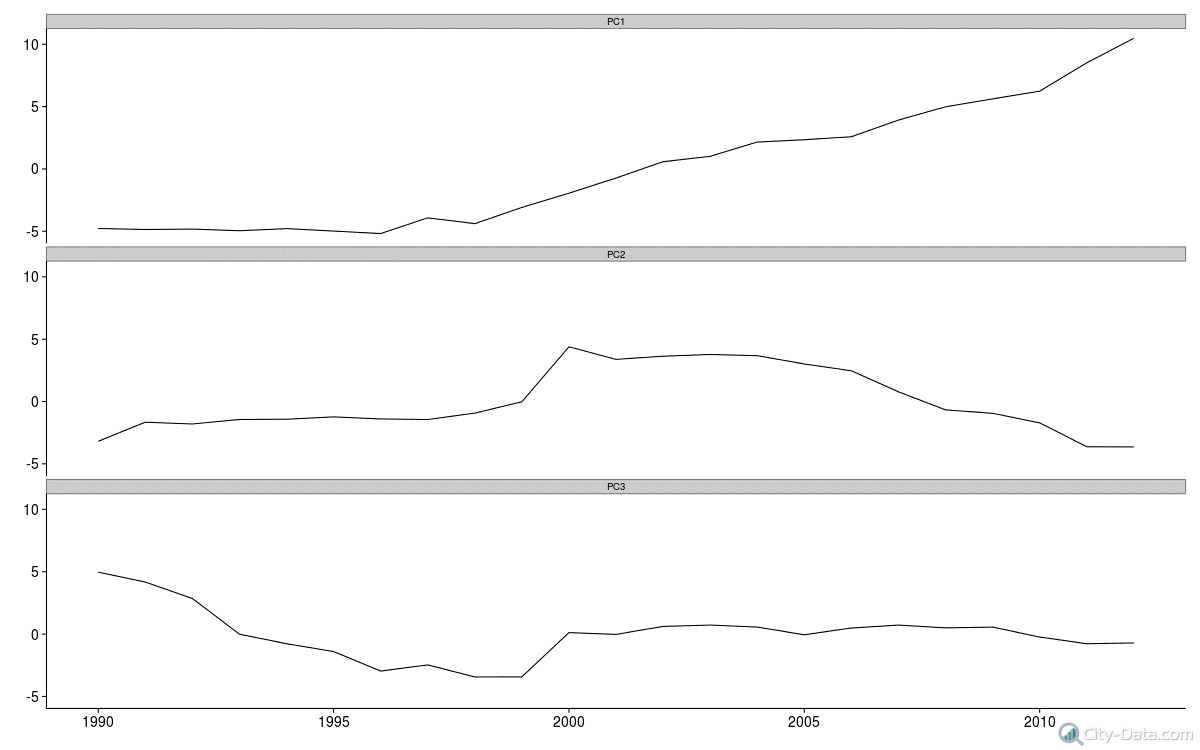 The patterns are accompanied by weights for each country. A large positive weight indicates that the pattern features strongly. A large negative weight indicates that the inverse of the pattern (flipped over around the horizontal axis) applies. Small weights mean that the corresponding pattern does not contribute significantly. Weights for each country with complete data are plotted below. 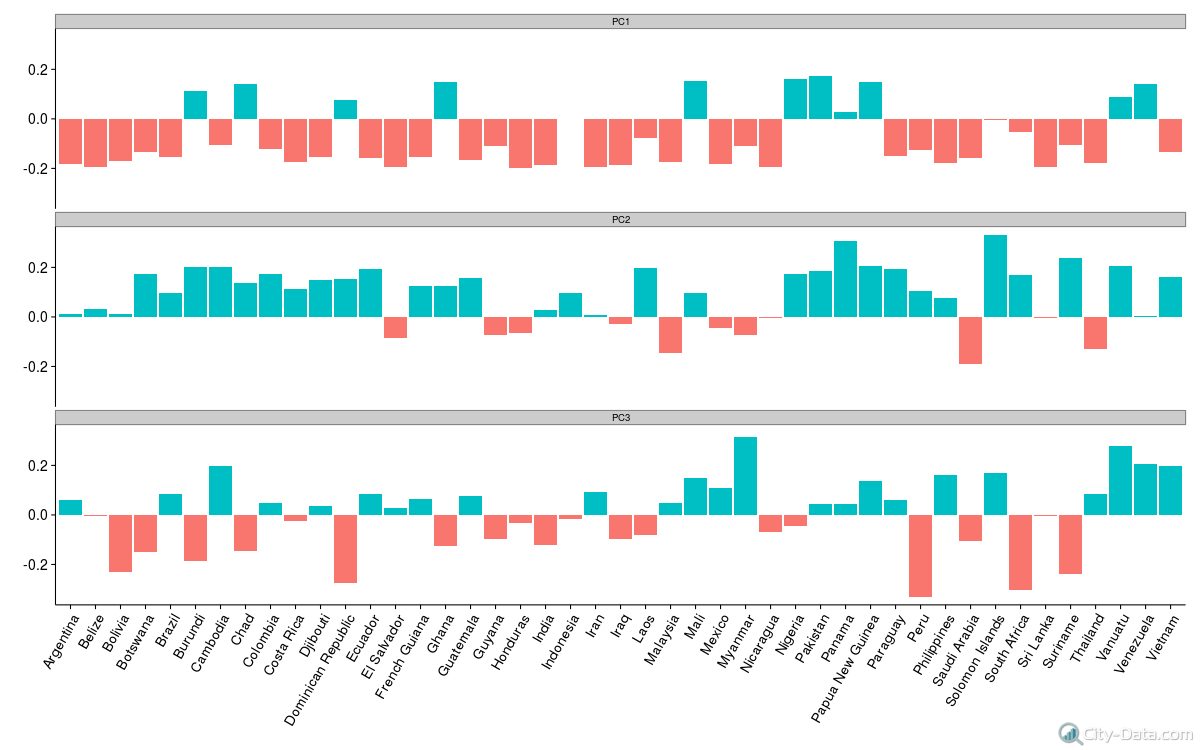 The second pattern, PC2, has a positive weight for most countries, which indicates that the majority of countries experienced an increase in malaria cases around 2000. Good examples of this behavior are Panama and the Solomon Islands.

As opposed to PC1 and PC2, where the majority of countries had either positive (PC2) or negative (PC1) weights, PC3 has a far greater variety of weights both in magnitude and sign. A few countries have particularly large weights and are more closely aligned with the pattern in PC3. Myanmar has a large positive weight for PC3. Although not strongly evident on the logarithmic scale of the plots for individual countries above, there was a decrease in the number of malaria cases in Myanmar during the period 1990-1995, after which the number of cases stabilized at around 1,000 per million population. Peru, on the other hand, has a large negative weight for PC3, which is consistent with an increase in malaria incidences between 1990 and 1995.

Note that Indonesia is somewhat unique in that its weights are small for PC1, PC2 and PC3. The cases of malaria in Indonesia, roughly constant since 1990 with a reduction between 2005 and 2010, do not really conform to any of these patterns.

The generally negative weighting for PC1 agrees with the tendency for decreasing malaria transmission in recent years [5]. The change in slope of PC1 around 1998 coincides with the establishment of the Roll Back Malaria partnership [6], which has been quite successful in reducing the transmission of malaria across the globe.

Interventions by the WHO have helped to reduce the incidence of malaria. These have focused on:

Yet these efforts could be significantly more effective if more funding was available — at present, the total expenditure on malaria intervention is less than half of what’s required.

The long-term prognosis for malaria looks good; the distribution of LLINs and the development of new drugs have resulted in the number of cases and deaths decreasing in most countries. However, if you travel to a malaria area (or even near a malaria area!), be aware of flu-like symptoms in the following months. And if you do develop a fever, insist that your doctor tests for malaria.

Tonic water traditionally contains quinine (used as a treatment for malaria), originally in large quantities. However, modern tonic water contains only a small quantity of quinine in order to preserve an authentic flavor. In the USA, the quinine content in tonic water is limited to 83 grams per liter. The required daily dose of quinine for therapeutic purposes is in the range 500 to 1000 mg every 8 hours. A treatment program based on the consumption of tonic water alone would require in excess of six liters of tonic water every eight hours. That’s a lot of fluids — drink up!

2 thoughts on “The Biggest Killer in Africa”