When is an age difference between partners a little too large? A common rule is that you cannot date someone younger than half your age plus seven. For example, if you are 30, dating someone 22 years old is just barely acceptable under this rule.

The following chart illustrates this concept: Couples between the dashed lines are the ones following the rule. 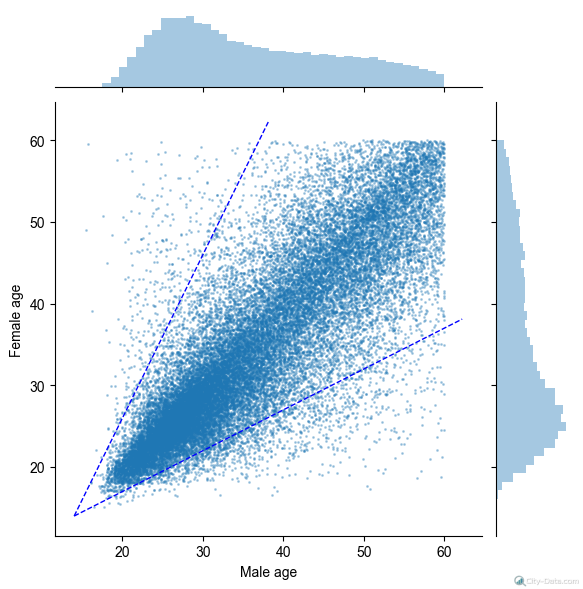 The rule itself, according to Wikipedia, has French origins — but how often is it broken in the U.S.?

Census data on married couples won’t help us much. The (relative) age disparity lessens as both partners grow older. Instead, let’s focus on couples who are living together but are not married yet.

It appears that breaking the rule is getting less and less common. Only 3.6 percent of all couples fall outside the “acceptable” range — compare this to 6.7 percent 10 years ago. Only around a quarter of them are hypergamous, where the woman is older.

Another interesting fact is that significant age disparities are much less common in Asian couples. The percentage here (2.7 percent of all couples) is only half of the national average. None of the other races exhibited any statistically significant differences.

And of course, it’s interesting to see the difference between states. Here’s the map:

Suffice to say, the difference is pretty significant. While numbers around 3 percent are registered in Iowa and Vermont, rates in excess of 8 percent can be seen on the map. Examples of such states include Oklahoma and Arkansas.

3 thoughts on “The “half your age plus seven” rule — how often is it broken?”