The geographic distribution of baseball loyalties provides significant insight into the social geography of our country. Our loyalties tend to follow distinct geographic patterns that, in some cases, follow the adage of rooting for the home team; in some cases, they tend to mirror patterns of population migration throughout the country. With baseball loyalties following a logical pattern of geo-spatial distribution, what insight can be gained from the characteristics of these populations? As a caveat, it bears mentioning that baseball fandom most likely does not (at least to our knowledge) hold any kind of social, economic, political or any other real-life implications beyond the misery that may fall upon you if your team is utterly useless (sorry Astros and Cubs fans). The Facebook Data Science Team examined the geographic source of Facebook likes on team pages. 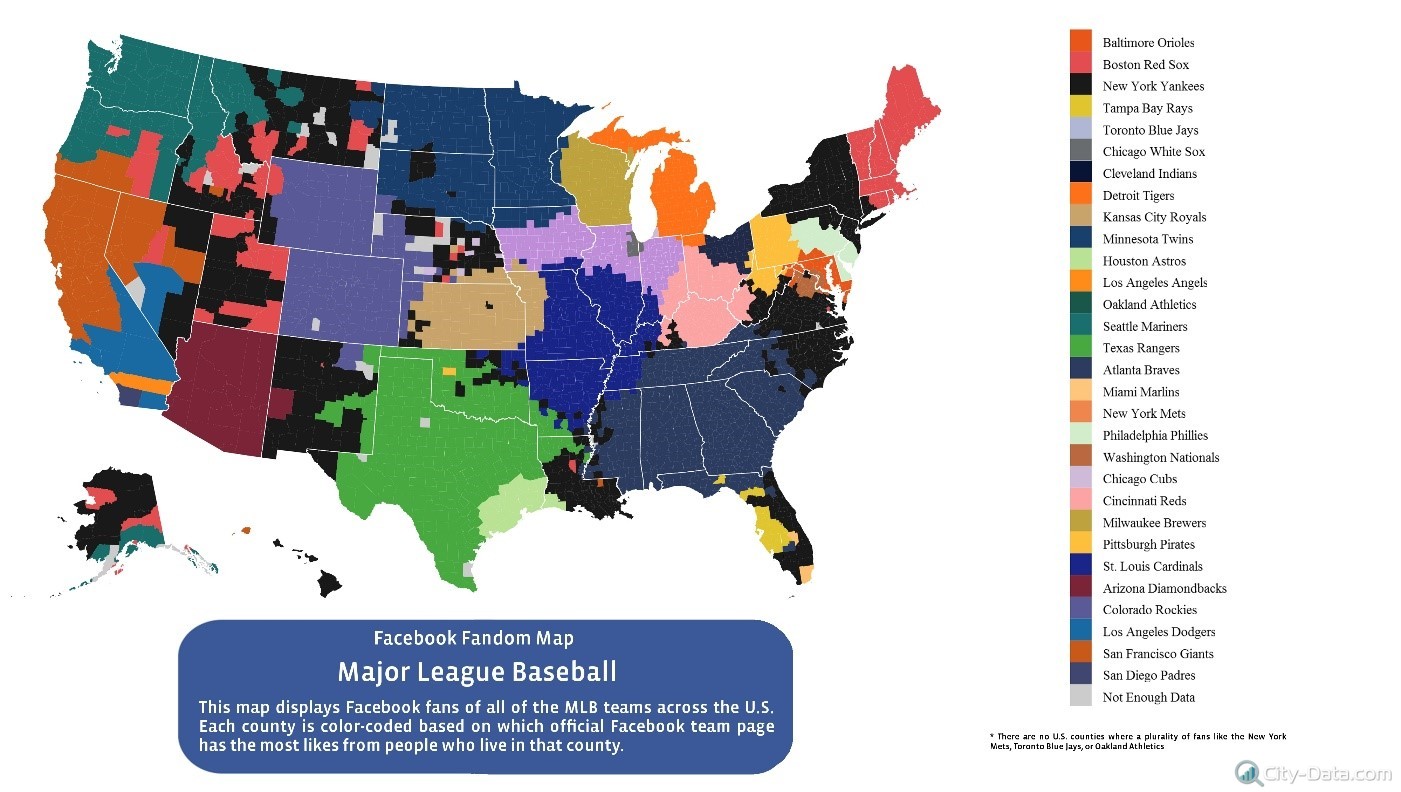 Baseball is as frustrating as it is entertaining. Just ask Cubs fans how the last 100-plus years have weighed on their collective psyche. Ask Red Sox fans about their state of mind between 1918 and 2004. Ask Braves fans the frustration of being the perennial bridesmaids year after year, dominating their division for nearly two decades while sputtering out in the playoffs or World Series, with 1995 being the exception. Although baseball has been placed on a hallowed pedestal in American culture for the attentive fan, it can be downright maddening, especially if the team you support possesses the usual baseball idiosyncrasies. Blown saves by dodgy closers, underperforming overpaid prima donna sluggers, late-season collapses and the tedious pace of the game all can add to the anxiety of being a loyal baseball fan. In fact, bad baseball may be detrimental to your mental health, especially if you have that admirable quality of loyalty following your team through thick and thin. With baseball’s maddening nature in mind, can a baseball team really cause an increased incidence of mental distress among their loyal supporters? Thanks to the Centers for Disease Control, survey data has been collected to measure mental distress among Americans. The figure below presents respondents to the CDC’s survey who reported frequent mental distress (14 to 30 mentally unhealthy days in the past 30 days) by county, aggregated over 2003–2009. 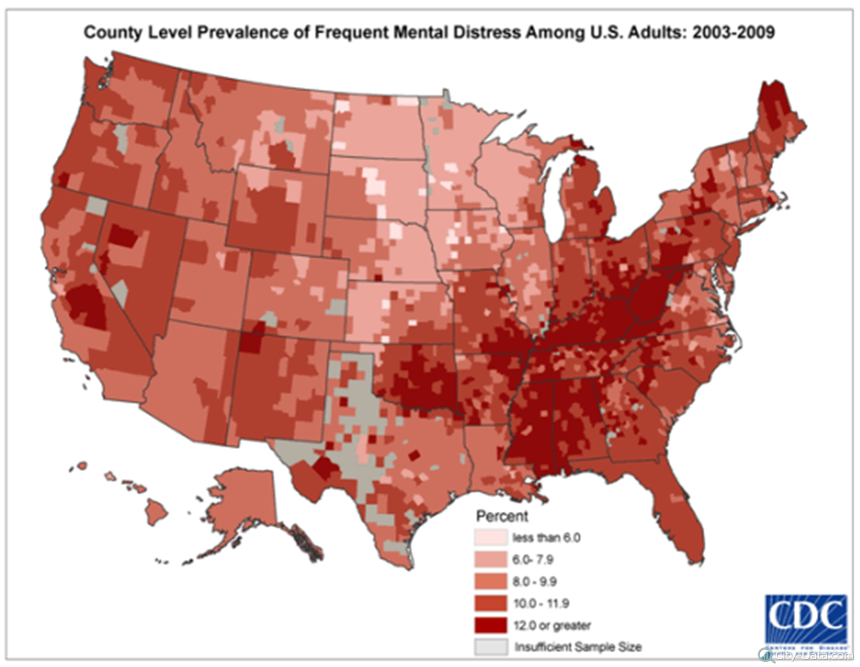 From the map representing the geographic distribution of mental distress among adults, it appears that the rate of mental distress in the population coincides squarely among the geographic concentration of Cardinals, Braves, Reds and Pirates fans. Given the relative success of the first two and sporadic recent success of the latter, the idea that mental distress seems to follow poorly performing or at least frustratingly inconsistent teams appears to lose some validity. Analyzing the fan bases of the some of the nation’s most hapless baseball franchises, these data reveal that among the areas representing the worst teams the population displayed unremarkable levels of mental distress. While one would expect the most mentally distressed individuals to be in the heart of Cubs nation or Astros nation, it was quite the opposite, as these populations displayed low to average rates of mental distress. This appears to be counterintuitive, as one would assume that a poorly performing baseball team would have comparatively more mentally distressed fans than a better performing team. Cardinals and Braves fans have enjoyed great, albeit sometimes frustrating teams over the years, which begs the question: why are they distressed? The rate of distress among Reds fans and Pirates fans is a little more easily understood; these franchises have been National League punching bags for the better part of the last 20 years. However, the question remains; why aren’t Cubs or Astros fans experiencing high rates of mental distress? Perhaps they have given up and settled into a comfortable cocoon of apathy; maybe it is more distressing to have a team that can and often does perform well. It could the crushing weight of yearly high expectations that cause them distress.

So if the clear answers do not lie in our underperforming or overperforming teams, are there other factors at play? Could the support of an NFL franchise provide a salve to the emotional wounds caused during the baseball season, or do they compound our distress? Similar to the methodology applied in the baseball fan map, the NFL fan map measured fandom by counting the number of likes on a team’s Facebook fan page within a distinct zip code. While supporters of the St Louis Cardinals, Atlanta Braves, Cincinnati Reds and Pittsburgh Pirates are the mentally distressed fans of the baseball world, it appears from the map that the fans of the Dallas Cowboys (residing outside of Texas), New Orleans Saints, Tennessee Titans, Cincinnati Bengals and Pittsburg Steelers all showed some of the highest rates of mental distress in the nation.   Out of these teams (Steelers notwithstanding), their recent history has been a roller coaster ride of great seasons mixed with abject failures. 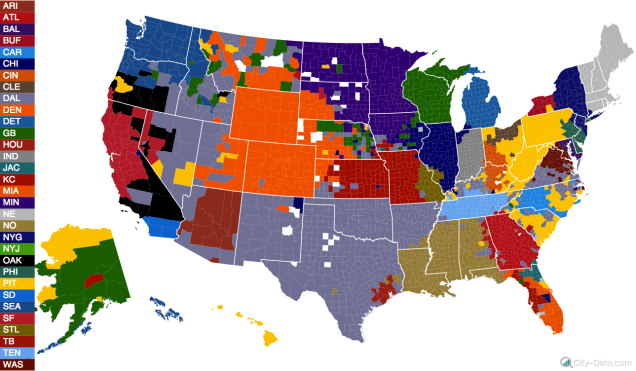 It appears the intersection of the following baseball and football fan bases in a geographic area could provide some sort of curious interaction and perhaps lead to increased rates of mental distress.

Based on the data presented here, do our sports team cause us mental distress? According to these data, in certain combinations they can have adverse consequences on our mental health. In some cases, fans of even the most frustrating of pairings, such as the intersection of Chicago Cubs and Chicago Bears fans (the 1985 season notwithstanding), should be pulling their collective hair out from mental distress. However, it’s quite the opposite, and their levels of distress are rather average. Where perennially average teams (i.e. Twins and Vikings) or a high-achieving football franchise paired with a woefully underperforming baseball franchise can result in the lowest mental distress in the nation, this appears to fly in the face of reason, as one would expect this roller coaster ride of highs and lows or the drudgery of just being average year after year would contribute to mental distress through some form or through feelings of alienation and distress. Alternatively, is it better to pair a slightly above average baseball team with a storied NFL franchise, as in the case of Brewers and Packers fans? Is this the key to a distress-free life? Alternatively, perhaps these are just spurious correlations, indicative of factors other than our sports teams’ propensity to win or lose. As these are just aggregations of individual circumstances, maybe it’s the sports fans who exist in stress-free bliss while the non-sport-watching lot carries the burden of mental distress. In the end, perhaps the healthy option is to follow the Twins and Vikings and settle into a stress-free existence.

One thought on “Baseball Fan Geography and Mental Health”