When people perceive that their lives are going well due to good living conditions, high income, affordable healthcare, a good education system, a safe neighborhood or other well-functioning systems of the society, they a have high level of well-being. There are several approaches to measuring well-being that focus on objective indicators, such as access to education, living conditions, life expectancy and healthiness. However, most of these fail to measure what people think and feel about their lives, how they evaluate their relationships, their resilience, or overall satisfaction with life. Well-being is more than our income; it is the way we experience our life in general and whether we are positive or negative about the general state of our being.

The concept of well-being challenges the traditional perception of development based on income or wealth. The Human Development Index (HDI) — the globally accepted development measurement system for more than 160 countries — is a composite measure of indicators along three dimensions: life expectancy, educational attainment and command over the resources needed for a decent living. In 2012, the U.S. was the third most developed country in the world after Norway and Australia[i] (see Map 1), while the world’s three least developed countries were Mozambique, Congo and Niger.

Let us now focus on well-being in the U.S. The U.S. Census Bureau measures this according to the level of the household living standards. In sum, in measuring well-being the Census Bureau weighs our living conditions, housing conditions, neighborhood conditions, community services, ability to meet basic needs, sufficient food and finally, the expectation of help from friends, family and the community.

The non-Hispanic white population has the highest satisfaction with living conditions in the U.S. The black population is the least satisfied with their housing conditions, including overall home repair, adequate living space and sufficient privacy; neighborhood conditions such as roads, police, fire, and medical services, attitudes towards local schools, etc.; and satisfaction with meeting basic needs, such as buying food and paying bills. Men are usually more content with their living standards than women, but women are more satisfied with the help they receive from other people (Chart 1). 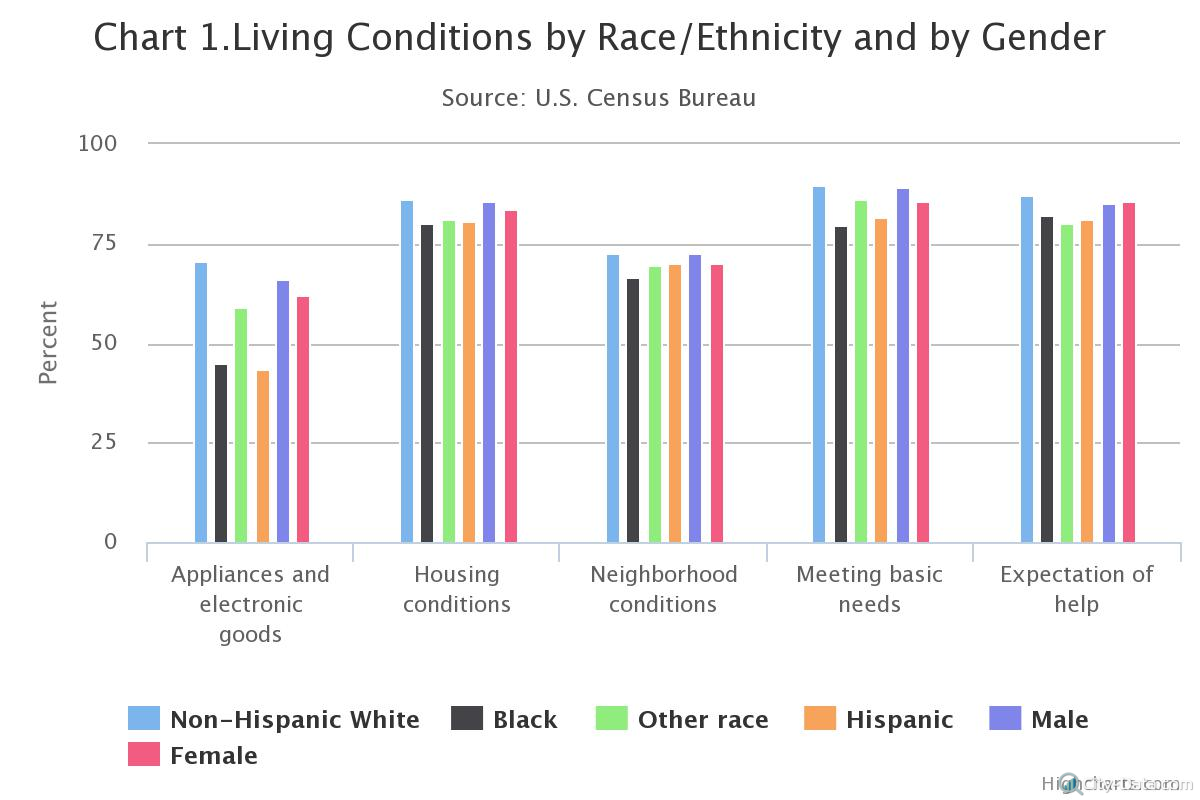 Unlike the Census Bureau, the American Human Development Index (AHDI) measures the well-being of Americans based on a long and healthy life, access to knowledge, and a decent standard of living.[ii] Based on these alone, Connecticut, Massachusetts and New Jersey are the most developed states in the U.S., while West Virginia, Arkansas and Mississippi are the least developed.[iii] In terms of large metropolitan areas, Washington, D.C., San Francisco and Boston are the most developed, and Tampa-St. Petersburg, San Antonio and Riverside-San Bernardino are the last in the list.[iv]

The Gallup-Healthways Well-Being Index is a barometer of Americans’ perceptions of their well-being comprised of six indicators (life evaluation, emotional health, work environment, physical health, healthy behaviors and basic access) that allows us to capture a more nuanced picture. According to the index, in 2013 the national well-being score fell to 66.2 from 66.7 in 2012, a statistically significant decrease that matches the previous low recorded in 2011.[vi]

Hawaii, Utah, Minnesota, North Dakota, Colorado and Montana are traditionally America’s elite five states for well-being, having the highest average scores in the last six years. In 2013, the top states were North Dakota, South Dakota, Nebraska, Minnesota and Montana. The bottom five states were Ohio, Alabama, Mississippi, Kentucky and West Virginia (Map 2). North Dakota reported the highest level of satisfaction with work environment and physical health and the second highest in emotional health but only 27th in healthy behaviors and 29th in basic access. In comparison, West Virginia ranked the lowest in all indicators except the work environment.[vii]

For an individual, well-being means a life well-lived. High well-being provides not only more productive business, higher personal income, better education opportunities, better healthcare and decent living conditions, but also a social environment that enables us to live in comfort and harmony with our own selves and the social world that surrounds us. Social equality, work-life balance, a green environment and clean air and support and care from the community and neighborhood are all attributes no less important for being satisfied with one’s own life than having a good job and a high income.

[i] United Nations Development Programme, Human Development Report 2013. The Rise of the South: Human Progress in a Diverse World, available at <http://hdr.undp.org/sites/default/files/reports/14/hdr2013_en_complete.pdf>

[vi] Gallup and Healthways, The State of American Well-Being; Available at <http://info.healthways.com/wbi2013>