Have you ever heard someone say, “So and so is moving to Florida for the beautiful weather,” or “So and so wants to live in California so he can go to the beach every day.”?

These statements indicate that some individuals move because of the weather.

Of course, the weather isn’t the only reason individuals might move to Florida or California.

If you’re a sports fan, you’ve probably heard someone say something to the effect that “Lebron James joined the Miami Heat instead of the New York Knicks because of taxes.”  Essentially, Lebron gets around a 10 percent increase in take-home pay by choosing a Florida basketball team over a team based in the Big Apple.

Among many others, these two factors are often in competition with each other, which raises the question: which matters more — weather or taxes — in attracting individuals?

To get started in answering the question, here’s what interstate migration has done over the past 30 years.

As a note of explanation, the animated GIF starts in calendar year 1991 and goes through calendar year 2012.  The larger the extrusion upwards, the greater the in-migration (i.e., people moving to the state).  The larger the extrusion downwards, the greater the out-migration (i.e., people moving away from the state).

Perhaps surprisingly, in- and out-migration have a good deal of business cycle associated with them.

In the early 1990s, there were large shifts away from California, the Northeastern U.S. and some Midwestern states to Florida, Texas, the Mountainwest (Utah Colorado, Idaho, Wyoming and Nevada,) and the Northwest (Washington and Oregon).  The trend weakened in the late 90s and early 2000s.  Following the weakening, migration picked up again, peaking in 2006 just prior to the housing market bubble bursting.  Migration slowed somewhat in 2007 and 2008, although people still kept moving to the Lone Star State.  Interestingly, in 2008 and 2009, Florida flipped from being a net gainer (usually a big net gainer, second only to Texas) to being a net loser.  After 2009, the trend continued, albeit at a much smaller pace for California and New York (the two biggest losers).

Here are the average temperature and precipitation by state.

Unsurprisingly, cold and warm states generally stay that way.  Overall, states in the South and West are warmer, while states in the North and East are colder.

Here’s the tax burden by state.

Interestingly, California and the Northeast generally impose higher taxes on their individuals and businesses, while the middle U.S. stays away from high taxes.

(As a note, Texas shows up as a high-tax state because of severance taxes.  Perhaps a more in-depth analysis would break down the burden by tax type.)

So, which has a stronger relationship with migration?

Here’s the scatterplot to prove it. 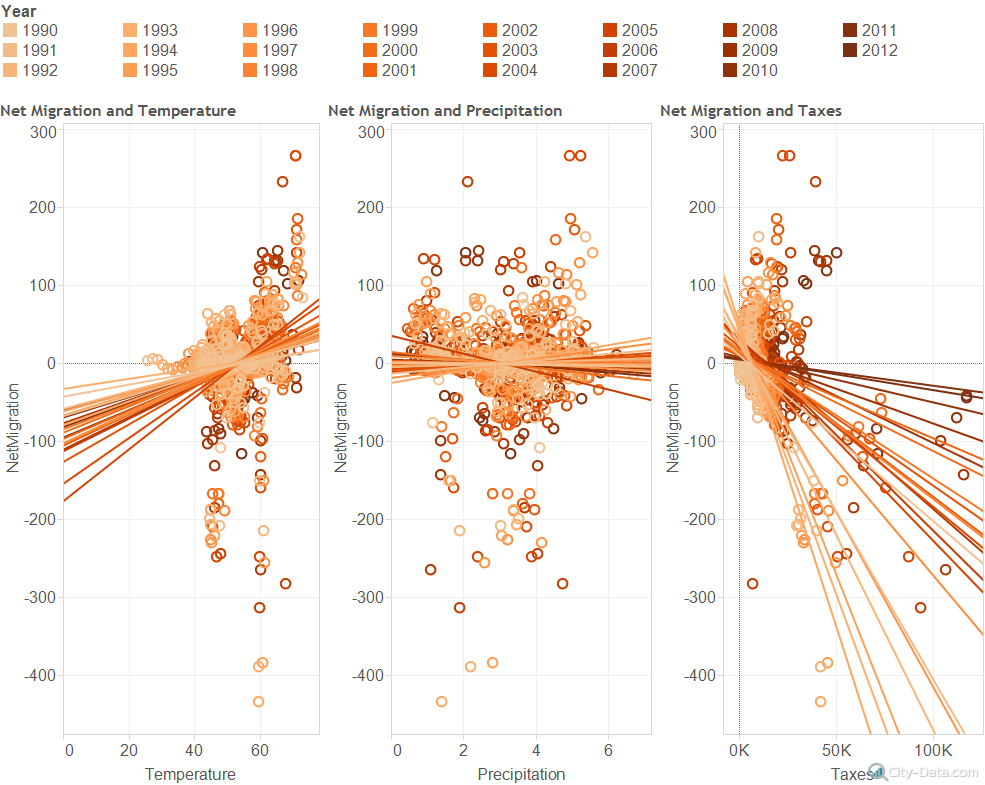 Overall, the next time you hear pundits discuss warm weather and taxes, ask them which one they think is a better predictor of net migration and its closely-related cousin, economic growth.  If they seem to think temperature is the only factor that matters, show them the relationship.  Taxes have a much larger effect than temperature or precipitation, despite what some would have us believe.