Last year, Tesla CEO Elon Musk said that the brand’s fatality rate is “four times better than average.” As NHTSA has released the data for roadside fatalities in 2017, we can finally put this claim to the test, and it appears that Mr. Musk was not far from being correct. As the chart below shows, Tesla’s cars appear much safer compared to other luxury makes — in fact, there was only a single fatality in the entire year.

The main challenge is in estimating the total number of miles traveled by each make. The National Household Travel Survey can provide a rough estimate for the months when it was held. However, this estimate doesn’t take into account the changes in the fleet numbers that occur over the course of the survey. This is especially important for Jaguar, which significantly increased its U.S. sales in 2016 — but above all, it’s a deal-breaker for Tesla, which continued to demonstrate exponential growth in sales until recently.

To obtain a better estimate, we used the survey data to estimate the average annual mileage for each brand. We then multiplied that number by our estimated number of cars on the road (based on sales data).

However, this approach also has its disadvantages. First, sales data can be manipulated by the manufacturer. And not all cars sold remain on U.S. roads — the problem of “grey imports” from the U.S. is especially prevalent in China. But while the numbers may be skewed, that would still allow us to compare different brands’ fatality rates. 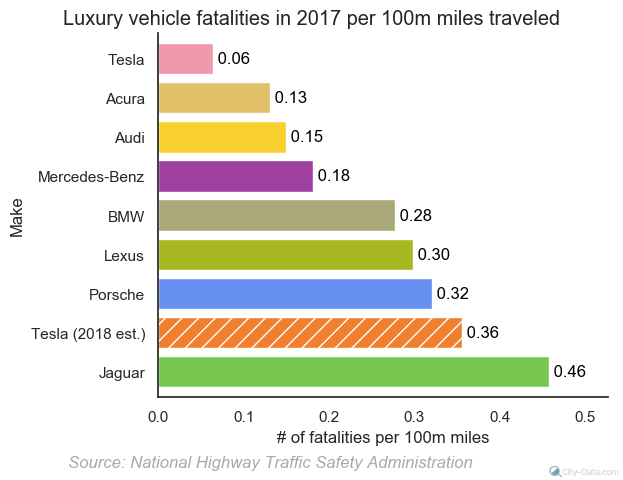 Indeed, Tesla’s numbers are surprisingly good, with it being twice as safe as the next best brand, Acura. However, having only one fatality may be viewed as good luck; after all, there were five fatalities in 2016 with less Teslas on the roads!

Note that here we only counted passenger cars and SUVs. Other vehicles, like BMW motorcycles and Mercedes-Benz vans, are excluded.

And one last note: We only counted 50 percent of all sales made during the year for which the fatality rate was measured. However, Tesla’s sales data is notoriously stronger in the third and fourth quarters, so our calculations show that the correct ratio here is 33 percent.

Unfortunately, the safety record for the brand is going to take a hit this year. The “Tesla deaths” list compiled by @ElonBachman shows 10 fatalities in 2018, and the author doesn’t claim it to be complete. In fact, the only 2017 fatality that is in the FARS dataset is missing from this list. That would place Tesla much lower in the rating, making it the second most dangerous luxury brand, after Jaguar.