In a way, college education has greater symbolic value for ordinary Americans than wealth — today, 85 percent of Americans think going to college is a big part of the American Dream, while only 69 percent think so about wealth.[i]

Education was and is one of the main mechanisms of social mobility in the United States; it is the straightest path to a middle-class life. Higher education means more job security and higher wages (Chart 1). Bachelor’s degree holders have half the unemployment rate and enjoy wages roughly double those of high school graduates. College graduates earn $12,000 more per year compared to those without college degrees; this gap has almost tripled in the last three decades.[ii]

The reliance of the U.S. economy on knowledge-related industries makes young Americans’ trust firm in the payoff of higher education. The number of college students has dramatically increased in the last 10 years. In 2012, there were 19.9 million college students, and in fall of 2013, a record 21.8 million students were expected to attend American colleges and universities, constituting an increase of about 31 percent (5.2 million) since 2003. The U.S. ranks as the fourth country in the world with the highest proportion of college-educated adults after Canada, Israel and Japan,[iii] and is the world’s second most expensive country for international students, who on average pay over $35,000 per year for an American degree.[iv]

What helps an ordinary American achieve his or her dream is the student loan system. Student debt is now nearly a prerequisite for a college degree: about two-thirds of bachelor’s degree recipients borrow money to attend college, either from the government or private lenders.[v] In 2012, there were 38.8 million borrowers with an average loan balance of $24,803. North Dakota (83 percent), South Dakota (76 percent), New Hampshire (75 percent), Iowa (72 percent) and Minnesota (71 percent) are the top five states with the highest percentage of college graduates with debt. Average student debts are the highest in New Hampshire ($32,440), Pennsylvania ($29,959), Minnesota ($29,793), Rhode Island ($29,097) and Connecticut ($ 28,783).

Today, the total student debt in the U.S. is over $1 trillion including both federal and private student loans. It is the only kind of household debt that has continued to rise and now has the second largest balance after mortgage debt. The total profit generated each year from student loans equals $20.36 billion, which is almost ten times the annual state budget revenue of a small country like Armenia.[vi]

Some studies argue that the total cost of degree acquisition can be repaid through the increased salary of college degree holders in less than four years. In addition, they will enjoy 50 percent more job security.[vii]

This doesn’t look bad from a risk of investment point of view. Though a borrower will pay $300 per month on average to cover the loan, 10 years later, there will be no meaningful differences between borrowers and non-borrowers in educational, employment, and family formation outcomes.

But all the above makes good sense, if you actually do get a good job — today, 41 percent of college graduates are overqualified for what they do.

However, student debts may turn the dream of almost 40 million Americans into a nightmare. Borrowing extraordinary amounts of money through federal and private loan programs potentially puts a huge burden on graduates’ shoulders. Only about 37 percent of federal student loan borrowers between 2004 and 2009 managed to make timely payments without postponing payments or becoming delinquent. Today, every seventh student with a student loan has at least one past-due loan. If you are a borrower, there is a 30 percent of probability that you will drop out of school and a fifty percent probability that you are delinquent or have already defaulted.

As shown above, borrowers with a bachelor’s degree graduate often have relatively manageable amount of debt that can be paid off in four to five years. However, circumstances such as periods of unemployment or failure to finish a degree program can lead to true financial disasters. Borrowers already graduate with a financial burden, which means they have less money to spend. It lowers the probability that they will take on an additional burden of forming a family or taking a mortgage or car loan. But even when they do, they will find it more difficult to get them.

Therefore, despite the advantages that student loans potentially provide in terms of employment, wage and middle-class lifestyle, it is still unclear whether it is worth taking the risk. This is particularly true for socially vulnerable groups of society: students under 30, female students, students of color and students from low-income families (who often have higher levels of debt compared to other groups). Other social and economic strains they encounter in the labor market, such as gender inequality or racial discrimination, may worsen the payoff of their student debt.

Today, 15 million borrowers are under age of 30, and their debt constitutes 33 percent of the overall amount of student loans. They have the largest share in the highest loan amounts for graduate programs (Chart 3). Considering the fact that the graduates of this age group are at the very beginning of their professional career and relatively new in the labor market, the difficulty of finding a well-paid job appropriate for their education level is relatively high.

The same is true for students of color. Unequal job market conditions, such as an unemployment rate (12.7 percent) nearly twice as high as that of white Americans (6 percent), lower the chances of non-white college students finding high-paying jobs soon after graduation. Meanwhile, black Americans have the largest share of the highest loan amounts (Chart 4). The same is true for female graduates, whose share of student loans of over $9,500 is twice as high as that of male graduates: 62 and 38 percent accordingly.[viii] 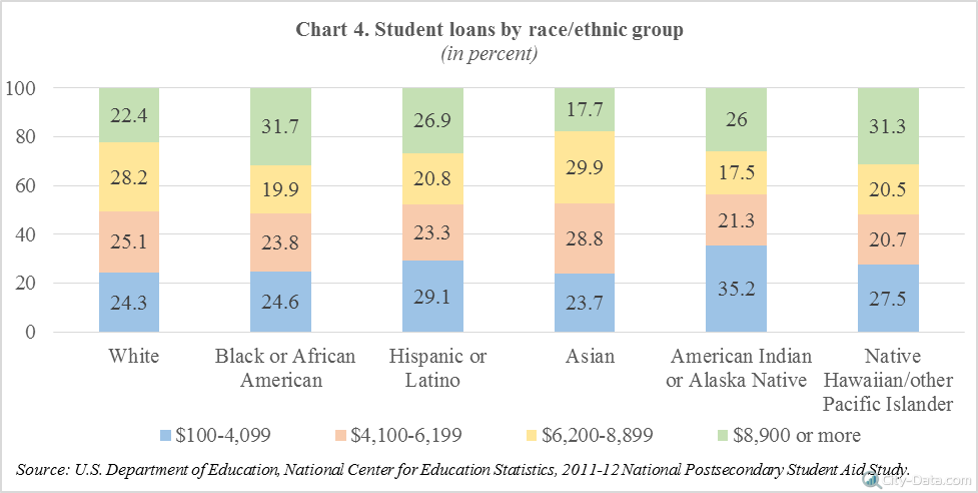 Some studies quantify how much these debt levels influence college-educated households’ financial stability over a lifetime. Findings show that over a lifetime of employment and saving, $53,000 in education debt leads to a wealth loss of nearly $208,000.[ix] Considering that student debt varies by race, gender, family income and age, the lifetime cost of student loans for these groups will likely be even greater.

Today, many aspects of the American Dream, such as college education or owning a house, share one common feature — they make us indebted. College education may be critical for social climbers, but there is a frugality lesson for those who fail that they should not ignore.

[ii] Joseph E. Stiglitz, “Student Debt and the Crushing of the American Dream”, The New York Times, 12 May 2013; http://opinionator.blogs.nytimes.com/2013/05/12/student-debt-and-the-crushing-of-the-american-dream/

[iv] Business Insider, “America is the Second Most Expensive Country in the World for International Students”, http://www.slate.com/blogs/business_insider/2013/08/17/the_most_expensive_countries_for_college.html