People in the United States are more geographically mobile than in any other western country — at least they used to be. The idea that one can choose to move to a place that promises better life has been an important part of American life. For more than 40 percent of Americans who change their address every five years,[i] mobility is a lifestyle.

The recent release by the U.S. Census Bureau states that 35.9 million U.S. residents (or 11.7 percent of all Americans) moved between 2012 and 2013. This is slightly lower than the movers’ rate in 2011-2012: 12.2 percent. For state-to-state moves, the most popular destination was Florida, followed by Texas and California: Together, they hosted every fifth state-to-state migrant (Map 1). As for the regions, the Northeast had the lowest mover rate among regions (7.8 percent), followed by the Midwest (11.0 percent), South (12.8 percent) and West (13.4 percent).

In general, the nation’s overall mover rate is steadily declining. In the 1950s and 60s, people stayed in the same house for an average of five years; in 2013, they stayed 8.6 years.[ii] Since the 1950s the number of movers has decreased by almost half, from 20.1 to 11.4 percent. As Chart 1 shows, the general decline in mobility was connected with the decline of mobility within the same county. The rate of movers to other states has also dropped by almost half, from 3.6 to 1.6 percent. 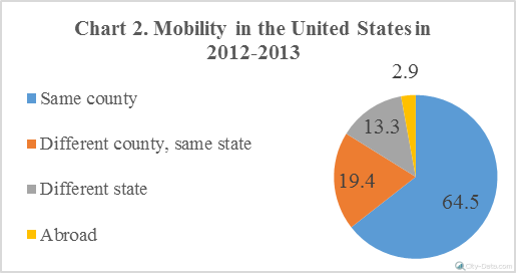 For almost half of movers, the reason for moving was housing (49.4 percent), be it buying a house, moving into a better or new apartment, cheaper housing or a neighborhood with less crime. Of all moves, 30.4 percent of moves were family-related, 19.3 percent job-related, and only 2 percent education-related. Sixty percent of those who moved due to housing issues stayed within the same county, but almost half of those who moved because of a job had to change their state (Table 1).[iii]

People are ready to move far for a good job. They move from local labor markets where the return on their individual skills is relatively low to markets where this return is relatively high. Lower earners move more; last year, 18.9 percent of the unemployed moved compared to 11.9 percent of the employed. People living below the poverty threshold were more transient than the nation as a whole, as 20.5 percent moved in the last year.[iv] The black population and Hispanic population, which had the highest unemployment and poverty levels among race and ethnic groups in 2012, had the highest mover rate: 15.0 and 13.9 percent respectively.

High-income people move less. Income differences do not seem to play a significant role in long-distance moves, but the higher your income, the less you will move within your county. (Chart 3).

Mobility rises with education. College graduates have the most mobility, high school graduates less and dropouts the least (Chart 4). Almost half of U.S. college graduates move out of their birth states by age 30, while only 27 percent of high school graduates and 17 percent of dropouts do.[v] However, the recent decrease in the mobility of graduate students is a positive trend for less-developed regions and states: local investments in human capital do not exacerbate out-migration or cause brain drain.

Okay. Americans move less, but is it bad or good? Opinions may differ. The steady decline in internal migration rates across almost all population groups may mean that macroeconomic forces at the national level are likely responsible for the decrease. The collapse of the housing bubble is one of the most popular economic explanations as in-county moves usually associated with housing had the largest decline. Jed Kolko, Chief Economist at Trulia, Inc., argues that the recent housing market recession may have caused this downward trend in migration [vi] — after all, relocation activity often involves both housing market activity and changes in employment. Chart 5 shows how the rate of housing-related moves decreased during the recession of 2008. 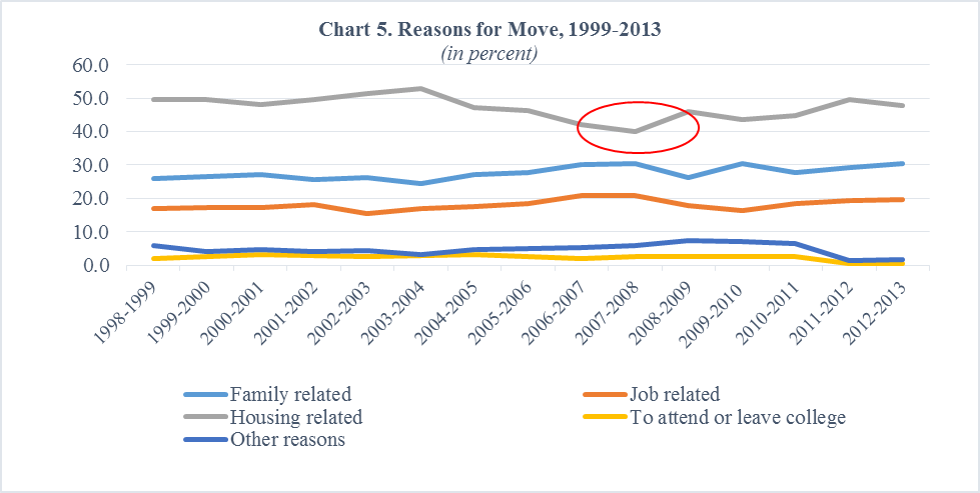 According to experts from Freddie Mac and the National Association of Real Estate Investment Trusts, the collapse of the housing boom led to an unprecedented number of homeowners who owe more on their mortgage than their homes are worth. These homeowners cannot move without incurring significant losses on their homes, possibly causing a “lock-in” effect that reduces geographic mobility.[vii]

However, a recent study by Federal Reserve Board experts suggests that the decrease in geographic mobility is not necessarily an outcome of the recent economic recession. Americans move less because they do not need to move.[viii] Firstly, occupational mobility is down — Americans are switching jobs less frequently than they used to because jobs are no longer geography-specific. On the other hand, the information about the possible destination of the move is more accessible; this cuts down the number of pointless moves. For example, today a worker or an unemployed individual no longer needs to move to a new city and then frantically search for a job because he or she can search beforehand via the Internet.[ix]

Immigrants who have decided to move to the United States can conduct research on the most suitable point of landing beforehand: as the numbers show, the geographic mobility rate among immigrants has also decreased.

Time and economic recovery will show whether the decline in geographic mobility was the product of the economic recession. Economists may stay concerned with economic recession freezing the mobility of the domestic labor force that the U.S. has long benefited from.[x] As for me, the idea that finding better housing, income or employment does not necessarily imply a costly relocation to other state or region sounds like good news.

2 thoughts on “The nation on the move slows down”