It was recently suggested that a given name can be used to infer a range of personal characteristics, including age and ethnicity. This is certainly not unreasonable. Estimating age from a given name is (in some cases) quite reliable since names go in and out of fashion, and thus their prevalence varies with time.

The number and variety of given names in use has expanded dramatically since the end of the 19th century, when the majority of names were of classical or Biblical origin. Many new names have subsequently been adopted or invented; today celebrities and fictional characters have a significant influence on popular names.

Names like Fannie, Mabel, Clarence and Fred were in vogue at the end of the 19th century, but are rarely used today. By contrast, some names that are currently popular, like Abigail, Madison, Caleb and Ethan were scarcely used in earlier times. Perennial classics, for example, Katherine, Elizabeth, Clarke and Joseph, have been used consistently over the years. These would, of course, not be very good candidates for inferring age!

Some names fade regularly in and out of fashion, while others are popular for only a short period of time before disappearing completely. These are likely to be rather good indicators of age. The plot below shows the number of times a variety of names were assigned over the years from 1880 to the present day. The names considered were selected to illustrate how fickle naming fashions can be. For example, Ashley and Jessica became popular in the 1980s, but their popularity was short-lived and by the late 1990s they were seldom used. Similarly, Jason was briefly a fashionable boys’ name in the 1970s, while Brian enjoyed popularity for around three decades, reaching a peak in the 1970s. 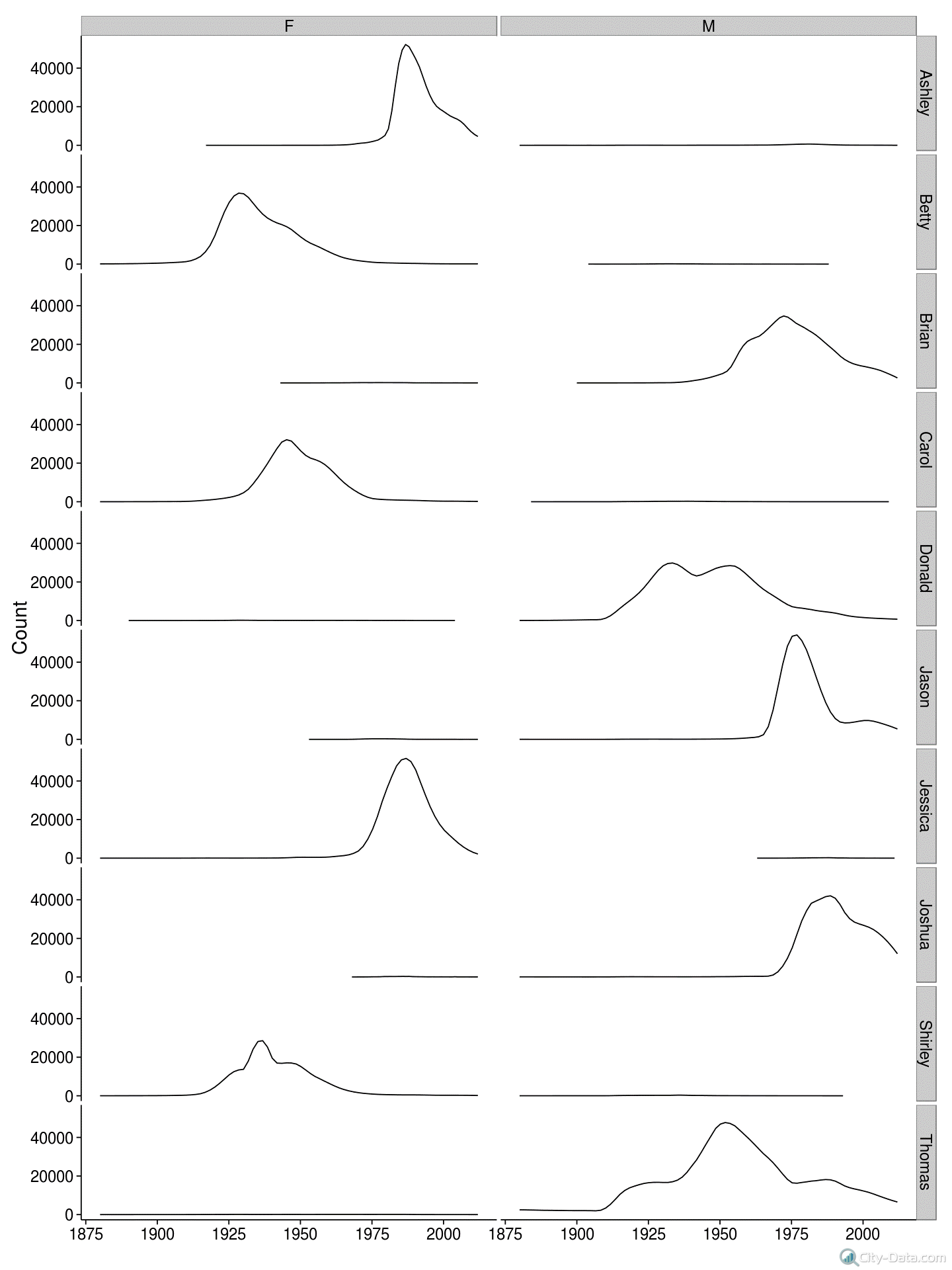 Which names were the most popular over the last century? John was consistently the leading boys’ name from 1880 through to the early 1920s. Robert then rose to first place, reigning for more than a decade before James took over. James was followed by Michael from the 1960s until 1999 when it was replaced by Jacob. Jacob still holds first place today.

Among girls’ names, Mary dominated for even longer than John, occupying the top spot from 1880 until 1946, when it was supplanted by Linda. Linda was only on top for six years before Mary regained first place, holding it until the early 1960s. Lisa, Jennifer, Jessica, Ashley, Emily, Isabella and Sophia, in turn, were subsequently the most popular girls’ names. Emma, popular at the end of the 19th century, faded in popularity during the 20th century but has staged a resurgence over the last two decades. 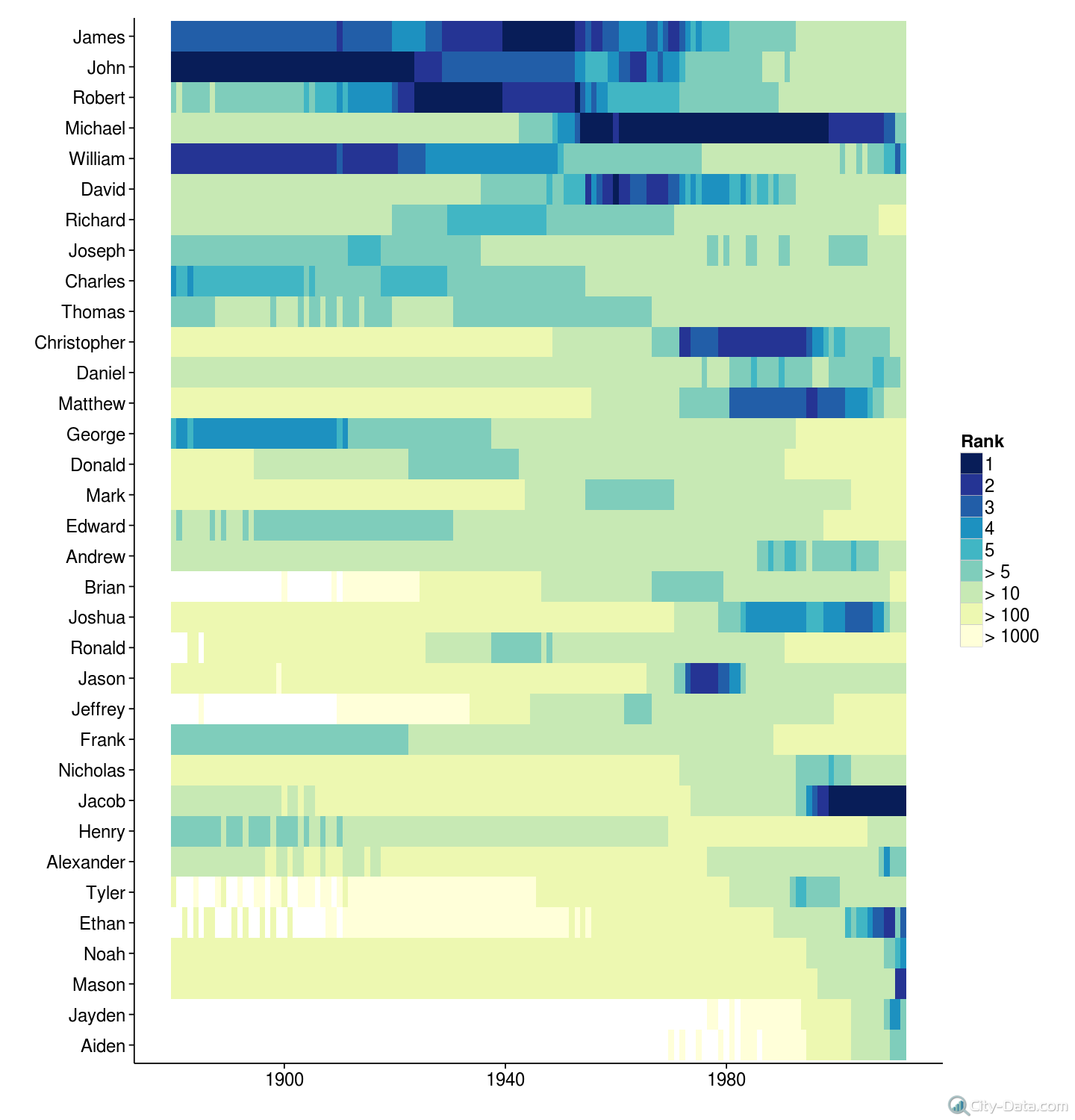 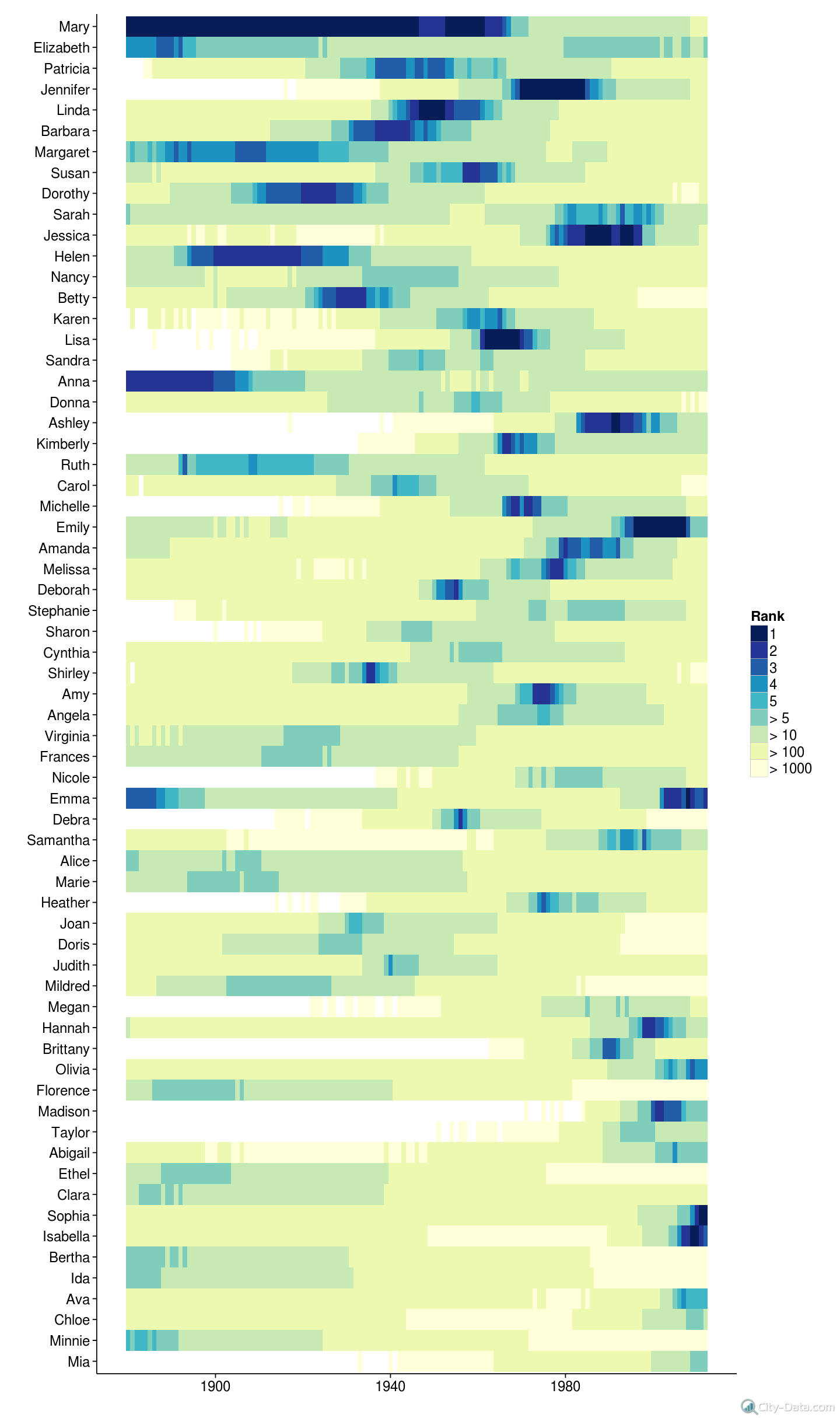 Let’s move on from the popular names. What about the more unusual names? Rocket has been used for about 100 boys since the turn of the new millennium. The number of boys named Jedi now exceeds 50 and there have been a few boys named Thunder every year since the 1970s. There have been more than 2000 girls named Tequila, and there are also now a smattering of girls named Leeloo. Nirvana, which is a niche girl’s name, has slowly been gathering popularity since the 1970s. Interestingly, there were a handful of boys named Excel in 1922 (clearly not the same Excel!). Rogue, which was a rare boys name back in the 1930s, is now being used in increasing numbers for both genders. These are just a few that stand out; there is a horde of other esoteric names being used.

Which names are going to be the most popular over the next few years? It’s hard to tell, but for boys, it will probably be Jacob, Mason or Ethan, while for girls it is likely to be Sophia, Emma or Isabella.

It’s interesting to consider the factors which determine the popularity of various names. The names of cities and states can make attractive given names [2]. Titles have also become prominent as given names. In South Africa, Doctor and Professor are not uncommon! Words implying opulence (valuable gems and metals), nouns, last names and the names of historical figures have all been used as given names at one time or other.

Names of precious gems and a few metals have also been used as given names. Ruby and Amber are pretty popular across all states. Tin has been used 59 times (but only in California), while eight children have been named Copper (but only in Texas). California and Texas are the most adventurous, employing the widest variety of names in this category. 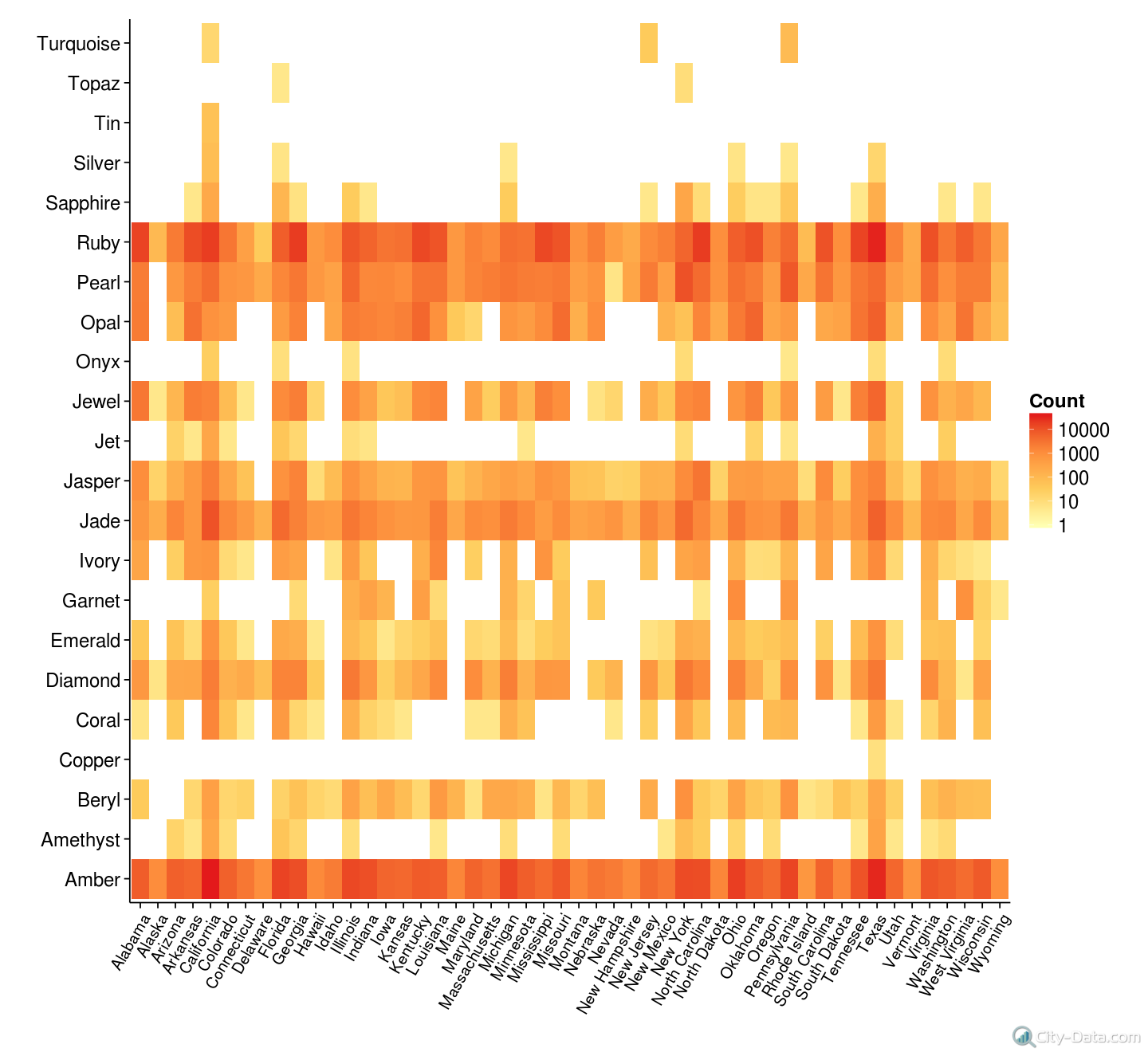 Returning to the first plot in the article, you might have wondered why there is a flat line in the Male column for Ashley. Similarly, why is there a flat line in the Female column for Jason? This is rather interesting. At times, according to the data, these names have also been used for the “other” gender. Those lines are not entirely flat: the peaks are just rather small relative to the peaks for the “normal” gender. For example, Ashley has been used as a boys’ name as well, with usage extending from the 1970s to the 1990s and peaking at a count of around 750 in 1980. The timing of the peak is roughly the same as that for female Ashleys, but around 75 times smaller. In 1934 there were 170 boys named Betty, while there were 252 boys named Jessica in 1989. Quite surprising! Conversely, traditionally boys’ names used for girls: there were 10 girls named Jason in 2010 and 174 named Donald in 1930.

There are many more examples of names conventionally associated with one gender being used for the opposite sex. However, some names have been used more or less evenly for both genders. These unisex names will be the topic of the next post in this series.