In 2013, advocates of gender equality celebrated two important anniversaries:  50 years of both the Equal Pay Act and Betty Friedan’s “The Feminine Mystique,” which marked the beginning of second-wave feminism in the United States in the 1960s. After 50 years of revolutionary changes, achievements in gender equality leave us with mixed feelings. As our brief statistical overview will later show, women have come a long way; today, more women are working, and fewer are getting married.

Recent studies show that the focus on gender discrimination in the workplace is not enough to create gender equality in America: despite greater participation in labor force, a low unemployment rate, a relatively small wage gap and higher managerial jobs, women are still inclined to preserve identities and family roles of the 1950s to help their marriages survive.

So, are women truly better off today than half a century ago? According to labor statistics, women are doing undoubtedly and incomparably well nowadays than they used to. The rate of women involved in the labor force has increased by half, and women’s unemployment has been lower than men’s in the last three decades (Chart 1). Today, 27 percent of women earn more than their husbands and do only 1.7 times more housework. This is a giant leap forward: very few women (3 percent) earned more than their husbands in the 1960s but did six times more housework.

Despite increased representation in managerial occupations, women still occupy middle- and lower-level managerial positions and are underrepresented in executive jobs. In the C-suites of America’s biggest corporations, women make just 14.3 percent of executive officers and only 8.1 percent of top earners.[i] That makes one woman for every six men — a ratio that has not changed in the last six years. In both 2011 and 2012, only one-fifth of companies had 25 percent or more female Executive Officers, yet more than one-quarter had no women at all. 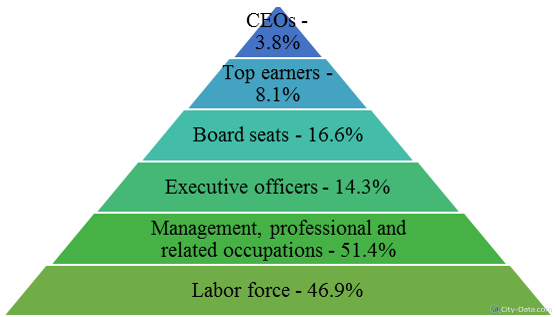 Women work and manage more but are paid considerably less: despite an initial closing of the gender wage gap after the Equal Pay Act, differences in what men and women with similar skills and education earn persist. In 2012, women made 76.5 cents for every dollar men did compared to 59 cents in 1960s — only 17.5 cents more in 50 years![ii] The gender wage gap is significant even at high-level jobs; male chief executives earn in average $2,275 per week while females only $1,730.[iii] 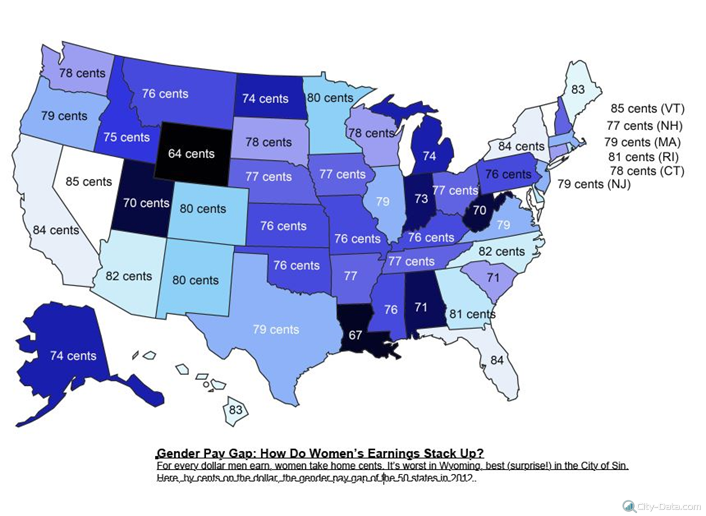 Low workplace opportunities weaken women’s position at home. In 2010, working wives contributed only about 38 percent of their families’ income.[iv] Not breadwinners, women tend to compensate their input in family well-being by spending more time on housework and care for other household members than men (Chart 3). The link between earnings and housework is well-established. Studies show that each thousand-dollar increase in women’s earnings would reduce their daily housework by 14 minutes.[v]

Increasing career achievements and earnings of women challenge the traditional role of men as breadwinners and disrupt power relations between couples. Studies show that when a woman’s contribution to household income tops 60 percent, the couple is more likely to divorce.[vi] A wife’s higher earning accounts for almost 23 percent of the recent decline in marriage rates,[vii] making the number of married adults in the United States historically low:  51 percent.[viii] For almost half of adults, women working for pay makes it harder to keep marriages successful (Chart 4).

Traditional values and norms still impose certain pressures on women to choose career paths and family roles that do not challenge the leadership of their male partners. The recent study “Gender Identity and Relative Income within Households” shows that women tend to lower their economic or social status or fulfill gender roles that underline the dominance of their spouses to keep their families together.[x] While there is nothing new in the fact that low-earning women do more housework, what is embarrassing is that women that out-earn their husbands take a greater share of the housework to assuage the husband’s unease with the situation. In a similar logic, women that have a better education or stronger earning potential keep themselves out of the workforce if that threatens the stability of their family relations.[xi] Statistics dot the i’s and cross the t’s: marriage remains a better (statistically significant) predictor of overall happiness among mothers than employment (chart 6).[xii]

Gender identities of 50 years ago continue to cast a shadow on gender equality today and force women to slow down the pace of emancipation for the sake of family. With all efforts dedicated to gender equality and female empowerment, it would sound trivial to ask who is doing the laundry. However, women may be breaking the glass ceiling at work but many of them prefer simply keeping a low profile at home.